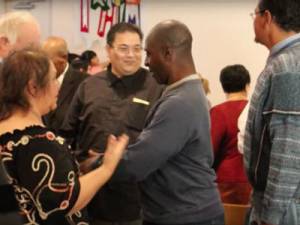 2016 Walton Award winner, First Thai-Laotian Presbyterian Church in Las Vegas is made up of many nationalities. Their ministry blossomed when they started a homeless ministry for those living in the bushes around the community. —Image captured from First Thai-Laotian video

First Thai-Laotian Presbyterian Church is the sole recipient of the 2016 Sam and Helen R. Walton Award of $50,000. First Thai-Laotian began in 2002 with 15 people who wanted to reach the estimated 15,000 Thai and Laotian persons living in Las Vegas. The majority of the first generation of these immigrants attended Buddhist temples, but due to the language barrier the younger generations had begun to drift from the faith of their parents.

As First Thai-Laotian shifted its worship service to English they became aware of homeless persons living in the bushes around the community. Members say God began to open their eyes and hearts—God’s mission was not just to Thai and Laotian persons. Since they began a homeless ministry they’ve helped 10 people move off the streets and have sent two members to the Lay Preachers Academy in Austin, Texas.

The church now has 68 members and 27 children, and became an official chartered Presbyterian Church (U.S.A.) congregation on September 16, 2015.

The Walton Award funds will help First Thai-Laotian purchase their own church building in Las Vegas; they’ve already raised more than $100,000 for a down payment.

The Walton Award winner was selected by the Mission Development Resources Committee and the Presbyterian Mission Agency endorsed the committee’s recommendation at their most recent board meeting on April 29, 2016.

The Walton Awards were established in 1991 as part of a $6 million gift from the late Sam & Helen R. Walton through the Presbyterian Foundation. The gift included an endowment of $3 million. Each year accumulated interest of up to $50,000 is given to outstanding new church starts for site acquisition and capital improvements.

For more information on how to apply for 2017 Walton Awards visit Mission Program Grants in Racial, Ethnic, & Women’s Ministries in the Presbyterian Church (U.S.A.)