Members of the Coordinating Table, established to coordinate the work of three PC(USA) organizations, engage in frank conversation 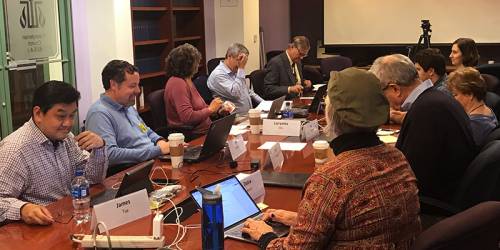 Members of the then-Moving Forward Implementation Commission, now a committee, are shown meeting in 2019. (Photo by Rick Jones)

LOUISVILLE — Established by the then-Moving Forward Implementation Commission (now a committee) to ensure that the work of three organizations — the Office of the General Assembly, the Presbyterian Mission Agency and the Administrative Services Group — is coordinated, the Coordinating Table has been working in recent months to define its work and to find its voice.

Some members indeed found their voice on Thursday. Meeting online, a handful of the nearly 20 Coordinating Table members voiced their ideas over what they ought to be doing and expressed their frustrations over, for example, the three agencies being required to try to formulate a unified budget to the online 224th General Assembly in 2020 and the 225th General Assembly, which opens at the Presbyterian Center in Louisville, Kentucky, on June 18 and continues through July 9.

“We have never had an honest conversation about our denomination — how we relate to one another and how we are being forced to change because times are changing,” said the Rev. Eliana Maxim, a member of both the Coordinating Table and the Committee on the Office of the General Assembly. She said the pandemic has “accelerated and deepened the difficulty of having these much-needed conversations” over such difficult tasks as trying to create a unified budget. At some point, Maxim said, financial and structural realities “will take precedence over everything else, forcing the denomination to make further changes.”

Last month, the Coordinating Table met with a consultant, the Rev. Dr. Laurie Ferguson, who could not attend Thursday’s virtual meeting but sent members a letter. “Trying to bridge differences, history, loyalties and old wounds, and forge new resilient ways of decision-making and working together, in an environment where you cannot meet face to face, pray together, eat and walk together, is indeed an impossible task,” Ferguson wrote. “The difficulty of establishing an environment of trust and safety and building a team identity in a fraught and anxious environment is an unworkable expectation.”

“But you all have accomplished work and have been able to make some good decisions about complex financial arrangements,” Ferguson wrote to the Coordinating Table. “You are to be commended.”

Ferguson suggested that as they work in advance of this year’s General Assembly, Coordinating Table members discuss three questions:

Coordinating Table members divided into small groups to chew on Ferguson’s questions, then came together to report what they’d discussed.

“The process has driven conversations across agencies,” such as recent efforts to research restricted funds, said Kathy Lueckert, the president of Presbyterian Church (U.S.A.), A Corporation, following the small-group discussions. “Small steps lead to hopefulness that can be communicated out to the church.”

One unhelpful aspect of meeting online is the inability to have side conversations, “which used to happen after church,” Lueckert said. “We are a little out of practice on how to do this [meeting in person]. When we get back together, we need to relearn how we interact together.”

“We must work together — ASG, PMA, OGA — in some form,” said the Rev. Dr. Diane Moffett, president and executive director of the Presbyterian Mission Agency. “It is important for the life of the church.”

The Rev. Stephanie Anthony, who moderates COGA, noted that a unified presentation of the budget, which occurred during the 224th General Assembly, “is not the same as a unified budget.” The Coordinating Table has accomplished “some concrete things,” Anthony said, but some of those didn’t require monthly two-hour meetings. “They happened behind the scenes when staff accomplished them, and we are grateful,” Anthony said.

“When money isn’t present, hard decisions have to be made,” Grimaldo said. “In the past, it was possible to say, ‘Great idea!  You get money.’ In situations where there is a shortfall, we have to choose between your great idea and someone else’s great idea, and all we have is prayer to discern which way we are going to go.”

Grimaldo said the Coordinating Table was convened “because several review committees came to very similar conclusions: that we can do better if we work together, and the unified budget is one way to do that. We trusted that agency heads could lead a process we prescribed, but this would be your process.”

Like other GA committees, the Moving Forward Implementation Committee must complete its recommendations by next month in order for them to be considered by commissioners to the upcoming General Assembly.

The Rev. Deb Avery, another member of the Moving Forward Implementation Committee, said she was part of the committee that reviewed the PMA eight years ago. “This is the first time I have heard this kind of frankness and boldness,” Avery said. “We’ve had the benefit of struggling together. I have learned from community organizers that through struggle is growth. We have been tense with each other and stressed out, and we’ve wrestled together. This has had the effect of giving us the ability to articulate honestly to each other.

In other business, the Coordinating Table endorsed an addition to the A Corporation’s Gift Acceptance Policy. Under the section on “Gift Restrictions,” the proposal adds these sentences: “The Presbyterian Church (U.S.A.) A Corporation will not accept gifts with restrictions that conflict with General Assembly mission values, policies or stances. All final decisions on the restrictive nature of a gift, and its acceptance or refusal, shall be made by the gift acceptance committee.”

The A Corp Board is scheduled to vote on this proposed addition to the policy during its Feb. 14 meeting.