…be led forth in peace. (Isaiah 55:12). Support to the Peace & Global Witness Offering.
Make A Donation Click Here >
Home › Faith Presbyterian Church: a beacon in the Blue Ridge Mountains 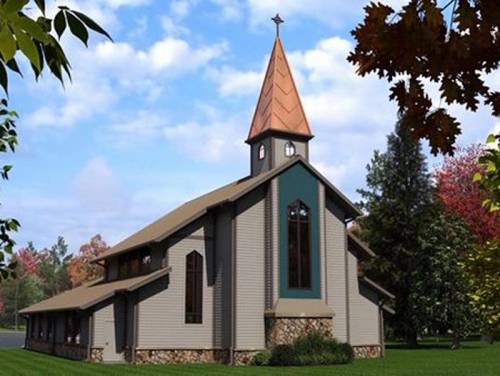 LOUISVILLE — In 2000, eight retirees led an effort to plant a new Presbyterian Church (U.S.A.) congregation in the mountains of north Georgia. Today, Faith Presbyterian Church – Blue Ridge has 159 members and is one of the fastest-growing congregations in Cherokee Presbytery and the Synod of the South Atlantic. Last year, Sunday morning worship attendance averaged 109.

“Person for person, square foot for square foot, dollar for dollar, in my 30 years of ministry both in Scotland and in the United States, I have never known a church that achieved as much as Faith has achieved,” Simpson said. “They’ve always been mission-minded. They’ve always been community-service minded.” 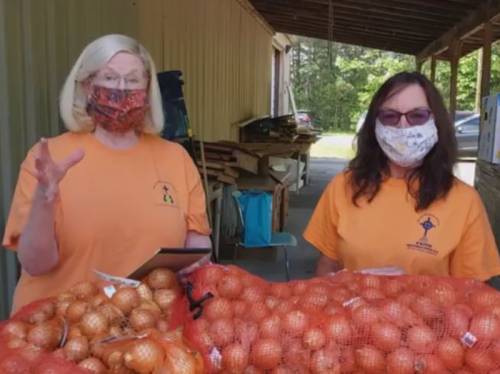 Everyone in the Fannin County recognizes the bright orange shirts of Faith Presbyterian members through their faithful community service. (Contributed photo)

In these COVID-19 times, Simpson wears his bright orange Faith Presbyterian shirt on Zoom calls. “People all over the community know Faith from the orange shirts,” he said. “Because every time there is a festival or a service opportunity, the Faith folks are there, wearing their orange shirts and getting about God’s business.” Faith Presbyterian is a Hunger Action Congregation, a ministry of the Presbyterian Hunger Program.

According to founding charter members, the journey of new church development has been undertaken step by step.

When Gerrie Jones and her late husband, Hervey, retired and moved from Virginia to Georgia in December 1999, they didn’t know there would not be a Presbyterian church. “After all,” Gerrie said, “Richmond had one on every corner.”

The Joneses visited a Methodist church several times, but it wasn’t Presbyterian. They got to know a few other couples who felt the same, such as Bruce King, along with his wife, Ann, who had some previous experience in church planting. Bruce said to Gerrie, “You need to find some way to get a Presbyterian church.”

Gerrie decided to write a letter, which she sent to Northeast Georgia Presbytery in Athens. “I sent it to the wrong presbytery,” she said. Her letter was forwarded to the Presbytery of Greater Atlanta, and eventually to Cherokee Presbytery. At the time, these three presbyteries collaboratively oversaw the Tri-Presbytery New Church Development Commission, so her letter inadvertently made the rounds to all three.

“We felt that the Holy Spirit was working in this county and that’s why we went to presbytery,” Gerrie said. “We thought this was the right time.”

Speed and Choomack explained that the new church development process typically begins by gauging community interest in starting a new church. This is usually done, they said, by inviting people to a meeting through a newspaper advertisement. 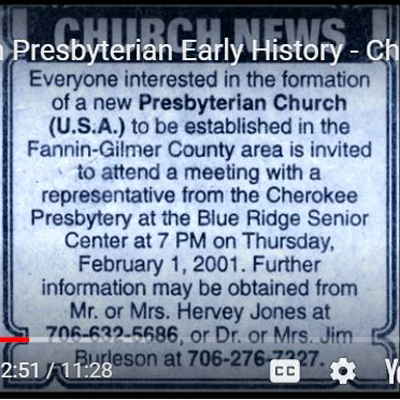 This advertisement ran in the local newspaper to gauge people’s interest in establishing a Presbyterian church. (Contributed photo)

Two interest meetings were held and the Joneses and Burlesons ended up connecting with 15 to 20 people who showed serious interest, including Pat and Tom Barrentine, who were retired and dividing their time between Marietta and Ellijay, near Blue Ridge.

Tom Barrentine served on the New Church Development Committee of the Presbytery of Greater Atlanta and Cherokee Presbytery. At that time, the presbyteries had a long-term plan to establish churches county by county, but only when a new church development grew to at least 100 members. Some members of the Tri-Presbytery New Church Development Commission questioned the readiness of Faith Presbyterian, since it didn’t have anywhere near 100 members at that time.

The late Dr. Jim Burleson explained to the commission, “Well, you can hold us to that if you like, but by the time we have 50, and by the time we get the next 50, the first 50 will be dead.”

Speed — Faith Presbyterian’s new church development advisor from its humble beginnings at the Joneses’ kitchen table — was then the chairperson of the Tri-Presbytery New Church Development Commission. He responded to concerns of the commission rather emphatically, “These people are ready now, and I’m going to help them do what they need to do.”

So, based on Burleson’s undeniable logic and Speed’s unwavering support, the presbytery made an exception to the 100-member rule for Faith Presbyterian in Blue Ridge.

“I truly believe that each step of the way God put people in place for us,” Gerrie said. 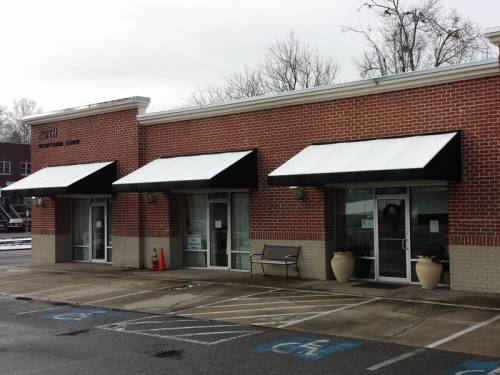 The downtown storefront, the last rental before moving to the new church building. (Contributed photo)

Pastors from Cherokee and other presbyteries filled Faith Presbyterian’s pulpits in rented worship spaces from 2001 until the church became an official Presbyterian Church (U.S.A.) charter congregation on June 6, 2004. That same day the first pastor, the Rev. Carol Wade, and the first session were installed.

Worship began at Cherry Log Pavilion and at Cherry Log Christian Church, before the congregation learned they could rent the Seventh Day Adventist Church on Sundays, which they did for several years. Then the church rented and renovated a storefront downtown, next to the train tracks, where it remained until this year. 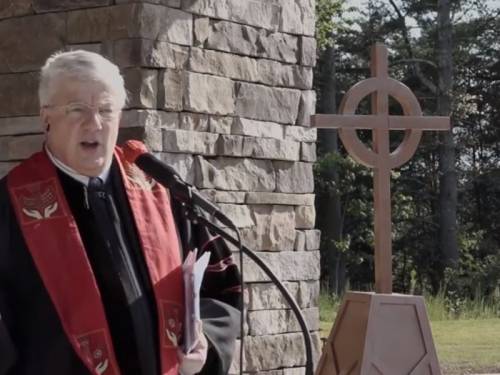 Due to COVID-19 restrictions, the Rev. Jim Simpson conducts an outdoor Act of Dedication and Commitment service of the new Faith Presbyterian Church – Blue Ridge building on Sept. 6. (Contributed photo)

The new church building, located on nine acres on Bluebird Road, was dedicated in September. It’s a building the congregation designed and contracted to have built — a space of their own to share in God’s mission in the world. See a video of the dedication.

In 2018, Faith Presbyterian was a winner of a $50,000 Sam and Helen R. Walton Award, which they used to help cover church construction expenses. The initial building campaign raised over $1 million, and a second capital campaign to reduce the debt ended with $400,000 committed. The church also received a low-cost loan from the Presbyterian Investment and Loan Program. 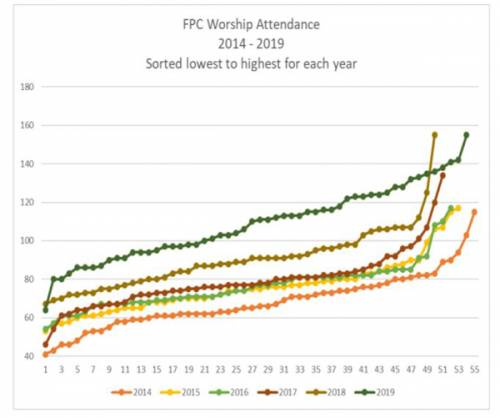 Growth is expected to continue as part-time residents move to Blue Ridge after retirement. (From Faith Presbyterian Church’s 2019 annual report)

“They were wise people who didn’t feel the need to hurry,” said the Rev. Nikki Collins, coordinator of 1001 New Worshiping Communities in the Presbyterian Church (U.S.A.). Collins served as a supply pastor in the beginning years of the congregation.

“They took their time and came to understand themselves and their community. For so long, their focus was on being connected to the community, and it wasn’t about the space,” Collins said.

“We were so certain this was God’s plan and that this would happen in God’s time,” Pat Barrentine said, “even though it was not on the drawing board for any presbytery.” 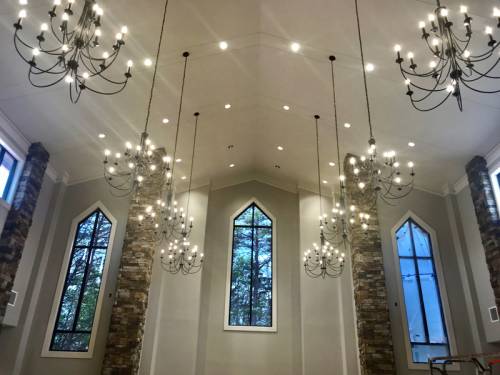 In October, the Congregational Health Team of Cherokee Presbytery honored Faith Presbyterian Church – Blue Ridge as a “Beacon of Hope,” acknowledging the enormous steadfast efforts to bring to fruition the completion of a magnificent place to worship and serve God.

Watch a series of videos about the Genesis of Faith Presbyterian Church.
Take a video tour of the new church building here.

Since the Presbyterian Hunger Program launched the Hunger Action Congregation initiative on June 1, 2017, 180 churches in 71 presbyteries have become HACs, and 92 of those are certified by doing ministries in all six areas of hunger action.