LOUISVILLE — Months after devastating flooding swept through portions of western North Carolina, residents continue working to rebound with the help of faith groups and other volunteers, but many challenges remain.

Canton Presbyterian Church and a local mission network are among the organizations that sprang into action when flash flooding hit Canton, the small, rural community of Cruso, and other nearby areas in August, killing six people and causing severe property damage.

“We were fortunate that we already had in place an ecumenical mission group that was very active in Canton called the Canton Missional Network,” said the Rev. Esta Jarrett, pastor of Canton Presbyterian Church.

“So we already had the group of pastors who are friends and mission partners in place that, as this was happening, we were texting each other. We got on a Zoom call” soon afterward, Jarrett said, then “we got together and served a free meal the next night. We had that system in place that we could get the ball rolling really, really fast.”

The flooding resulted from Tropical Storm Fred, which generated “buckets of rain in a short time, in a hurry,” swelling the Pigeon River, said Bill Neely, a member of the National Response Team for Presbyterian Disaster Assistance. Nearly all of downtown Canton was flooded, “which is pretty unusual.” 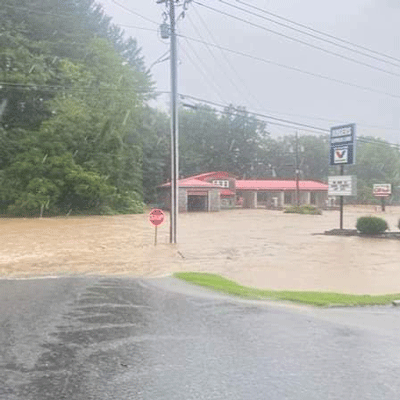 A flooded intersection in Canton, a historic mill town in the southern Appalachian Mountains by the Pigeon River. The city is a few miles west of Asheville, North Carolina. (Courtesy of Canton Presbyterian Church)

But Jarrett said the worst hit area was Cruso, where “the water moved through with the force of a bulldozer,” knocking homes off their foundations. At least one family watched a loved one being swept away.

With a lack of affordable housing for rent in the area, people are continuing to struggle. Some are hungry and in need of supplies, Jarrett said.

“As the cold weather has set in, we’re seeing the people who could not leave their ruined property, or chose not to leave, are really suffering from cold and from lack of electricity and lack of transportation,” she said. “It’s another kind of work that we can do to walk alongside them.”

PDA made an initial assistance grant to help with immediate needs, and long-term grants will be considered as needed, said the Rev. Jim Kirk, PDA Associate for National Disaster Response.

“This is a perfect example of the connectional church at work,” Kirk said. “Presbyterians in the impacted community are helping impacted siblings with hands-on support. The Presbytery of Western North Carolina and the National Church, through PDA, are able to bring additional resources to address the many unmet needs of those most in need. As with other disasters, PDA will continue to provide resources as able.” 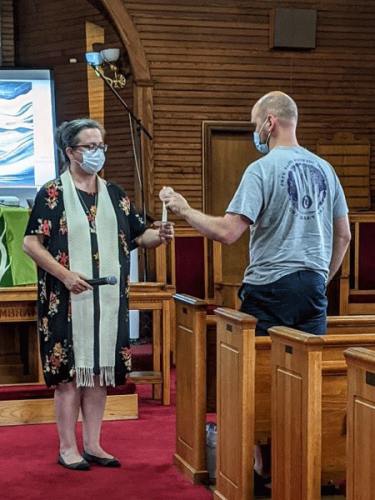 Other denominations or faith groups have been instrumental too, along with governmental entities and various relief organizations, Jarrett said. “Episcopalian, AME Zion, Presbyterian, United Methodist, Baptist, different kinds of Baptists, nondenominational. Just people have come together with a single purpose, and it’s been really powerful to see.”

The Missional Network, which has raised more than $70,000 for flood relief, and Canton Presbyterian Church both are working to assist people who would ordinarily “fall through the cracks” of government or larger charities, Jarrett said. Those targeted range from farmers and modest renters to the Latinx migrant worker community.

Though the church, which has raised at least $67,000, “we’ve been able to pay to provide two cars,” Jarrett said. “One to a single mom who lost her car in the flood and needed to get her kids to school and another to a migrant family of undocumented Latinx workers who, since the crops were washed out, lost their job and were living with a whole lot of different families in one small place and lost their car in the flood and needed a way to get to Florida,” where they have family.

The church also has been instrumental in helping people with livestock. “Our church has been able to buy bales of hay for farmers that don’t have any way to feed their livestock and are facing having to sell them because they can’t afford them,” Jarrett said. Also, “the session and I were able to hunt down someone who has room in their pasture” to benefit a woman who needed a place to put her donkey and her pony. 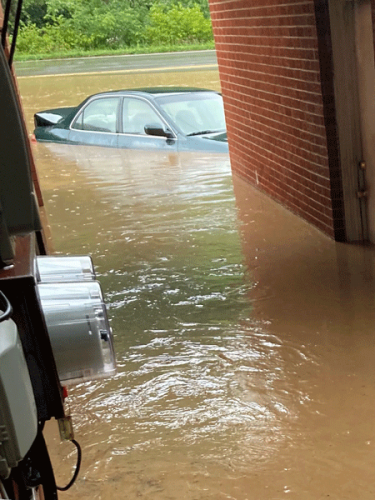 Kirk applauded Jarrett for the work that she is doing and said he is grateful that PDA is able to walk alongside people in the area.

Neely, who was deployed to the area in September to help with organization, said he thinks it will take at least three to five years for the area to rebuild from the flooding.

To help Presbyterian Disaster Assistance respond to this or other storms, donate to DR000169.