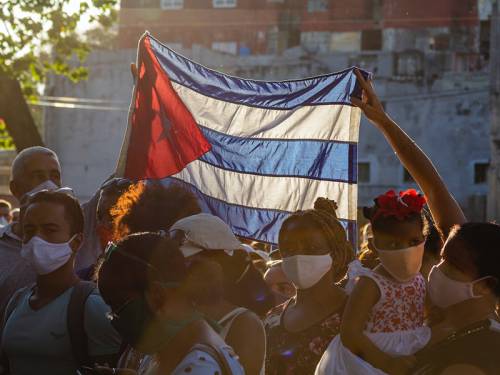 LEXINGTON, Kentucky — The Presbyterian Church (U.S.A.) is one of 24 churches and faith-based organizations to have signed on to a letter calling on the administration of President Joe Biden to lift the sanctions on Cuba, saying they prevent humanitarian aid from reaching people on the island.

“We know that Cuba’s economic crisis has been caused by numerous factors,” the letter reads. “However, it is clear that the U.S. economic embargo — intensified by the Trump Administration — is contributing to the worsening humanitarian situation the island is facing. We believe your administration should take the necessary steps to remove all obstacles preventing families and communities in the U.S. from helping families in Cuba.”

The letter’s signatories include the National Council of Churches, Church World Service, the Episcopal Church, Evangelical Lutheran Church in America, The United Methodist Church – General Board of Church and Society, and the Washington Office on Latin America (WOLA). This is the latest statement the PC(USA) and its Washington-based Office of Public Witness (OPW) have signed onto or initiated since protests broke out in July against the Cuban government over a dire economic crisis and suppression of civil rights.

“The humanitarian situation on the ground in Cuba is dire and the simple steps in the letter if taken by the Biden administration would help bring relief to our partners on the ground,” says Catherine Gordon, OPW’s Representative for International Issues. “Ultimately, the PC(USA) has called for a complete end to the U.S. economic embargo on Cuba.  But, at the current moment, given the crisis on the ground and depth of need of the Cuban people with the added issue of the COVID pandemic and lack of medical supplies, we feel the administration needs to take these immediate steps.  The fact that we are joined by 23 other organizations and faith groups shows the urgency of the issue and the need for aid for the Cuban people.”

Previous PC(USA) statements regarding Cuba this summer have included an Action Alert urging Presbyterians to call on Congress to restore trade relations with Cuba and a letter expressing solidarity with the Presbyterian Reformed Church of Cuba. The most recent Presbyterian policy on Cuba is “New Hopes and Policies in Cuban-American Relations: A ‘Nuevo Momento,’” passed in 2016 by the 222nd General Assembly.

“Many faith groups have partner congregations or sister churches on the ground in Cuba, and know from them how difficult the humanitarian situation is,” says Geoff Thale, President of WOLA. “They are speaking about Cuba not from a political perspective, but from a direct connection with communities on the ground, and their experience.”

The letter urges the Cuban government to respect the right of the Cuban people to peacefully protest.

“In Cuba, we hope that the Cuban government will respond to these protests with dialogue and action; as in other countries, we condemn heavy-handed responses to protest by security forces, and we urge the government to release all those detained for peacefully protesting or reporting on the protests,” it says. Hundreds of Cubans remain in detention for their roles in the protest.

But the aim of the letter is to call on Biden to lift many aspects of the longstanding embargo against Cuba, which has been widely regarded as outdated and causing more harm to the Cuban people than the government. In particular, the requests include lifting restrictions on remittances from Cubans in the United States to family in Cuba, suspension of licenses and other requirements to send medical and humanitarian aid to Cuba and lifting restrictions on financial and banking transactions related to humanitarian aid in Cuba. The letter also calls for re-staffing the U.S. Embassy in Cuba.

The United States had begun to ease relations and many restrictions with Cuba during the administration of President Barack Obama, but most of those policies were reversed under President Donald Trump. Thale and the Rev. Jim Winkler, President and General Secretary of the National Council of Churches, said they are disappointed in the Biden administration’s policies toward Cuba thus far.

“The Biden administration has, in my view, broken its promise to restore the Obama administration policies toward Cuba,” Winkler says. “I am deeply disappointed President Biden has, instead, chosen to pursue the reactionary policies of Donald Trump.”

The recent protests have prompted some in the United States to call for tougher sanctions on Cuba, which Thale said is the wrong way to go.

“President Biden campaigned on a pledge to take steps to improve conditions for Cuban families — making it easier to send remittances, to travel to visit relatives, and so on,” Thale said. “In its first six months, Cuba was not a priority concern; now, the protests in Cuba have led some to call, not to make the situation better, but to make it worse — to tighten sanctions even further.

“While the Cuban government ought to respect the right to protest, and we ought to call on them to honor the right to due process for anyone detained, punishing the Cuban people by tightening sanctions is absolutely the wrong thing to do. It will make a difficult humanitarian situation worse, and it won’t change the political dynamics on the island. The Obama administration recognized that dialogue and engagement was the right path for U.S.-Cuban relations, and the one most likely to open space in Cuba for faith communities, civil society groups and others.”

Thale pointed out that the Biden administration has an office specifically geared toward dialogue with faith communities. The PC(USA) is regularly part of those conversations.

Winkler says, “Our partners in Cuba value deeply the spoken witness we make on their behalf.”

While there are obvious political considerations in the situation, this is a humanitarian appeal.

“There’s been a lot of attention to the political situation in Cuba in recent weeks, after protests in early July,” Thale says. “The protests were driven by a lot of factors, but one of them is the serious situation with shortages, and COVID health concerns. U.S. sanctions make the shortages worse and make vaccine distribution and public health issues harder.

“We shouldn’t be ignoring those realities, or how hard daily life is for many Cubans, and we should at least take steps to ease our sanctions to respond to the humanitarian issues.”

Winkler says, “Our requests are modest and they meet immediate needs.”

Here is the complete text of the letter:

The unprecedented social outburst in Cuba last month has called attention to the difficult situation on the island.    We are deeply concerned about the worsening humanitarian crisis that is causing needless suffering and death for the Cuban people. Our partners in the Cuban churches—congregants, ministers, and their communities— have expressed their distress concerning the severe shortages of basic medicines, food, and other vital materials amidst the COVID-19 battle.

As faith-based denominations, organizations and partners, many of whom have a long history of work on the ground in Cuba, we are writing to ask you to prioritize the well-being of the Cuban people, irrespective of political considerations, by taking immediate humanitarian steps, and suspending U.S. regulations that prevent assistance from reaching Cuba and the Cuban people.

In Cuba, we hope that the Cuban government will respond to these protests with dialogue and action; as in other countries, we condemn heavy-handed responses to protest by security forces, and we urge the government to release all those detained for peacefully protesting or reporting on the protests.

We know that Cuba’s economic crisis has been caused by numerous factors.   However, it is clear that the U.S. economic embargo – intensified by the Trump Administration — is contributing to the worsening humanitarian situation the island is facing.   We believe your administration should take the necessary steps to remove all obstacles preventing families and communities in the U.S. from helping families in Cuba.

Specifically, we urge you to:

We hold you in our prayers and hope your administration can act immediately on this urgent request.  Our faith partners in Cuba are reaching out to us for assistance.  We hope that you will hear their plea.

Congregation of Our Lady of Charity of the Good Shepherd, U.S. Provinces

The Florida Council of Churches

National Advocacy Center of the Sisters of the Good Shepherd

The National Council of Churches of Christ in the USA

The United Methodist Church – General Board of Church and Society