…be led forth in peace. (Isaiah 55:12). Support to the Peace & Global Witness Offering.
Make A Donation Click Here >
Home › Expanding the narrative on the PC(USA)’s gender and leadership study 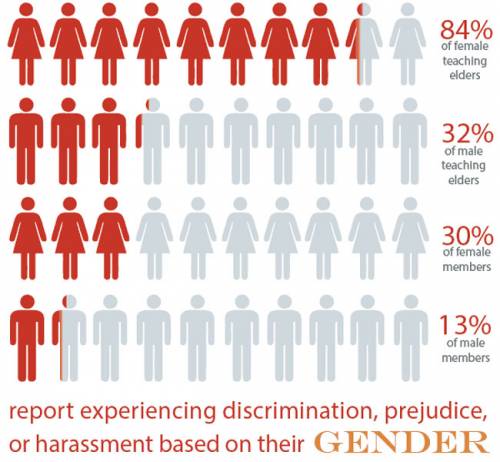 A video series is being made to update the Presbyterian Church (U.S.A.)’s 2016 study on gender discrimination.

LOUISVILLE — A 2016 study conducted by the Presbyterian Church (U.S.A.) Research Services, “Gender and Leadership in the PC(USA)” identified two key findings: gender discrimination is still pervasive within the denomination, and almost half its members are not particularly aware of it.  The study is a part of a larger research project assessing the status of women at all levels of the church.

The research was conducted in partnership with Racial Equity & Women’s Intercultural Ministries of the Presbyterian Mission Agency and the Study on the Status of Women Team, created by the Advocacy Committee for Women’s Concerns. The goals of the study were twofold:

In an ongoing effort to expand the narrative on the study, a series of videos is being developed to give further insight into the topic.

“The series is intended as an educational resource for congregational use and relates to the Gender and Leadership Report that was given at the 2016 General Assembly,” said Dr. Elizabeth Hinson-Hasty, professor of Theology at Bellarmine University in Louisville. “It is our hope that this video series, which will be a part of the Theocademy, will used for Sunday school classes and teachers or a confirmation classes or other study groups.”

Hinson-Hasty says the video series can be used as training for lay leadership as well as pastors. “We want to capture the attention and imagination of the next generation of Presbyterian and Reformed leaders,” she said.

Henson-Hasty says other goals defined for the project include:

Among women pastors surveyed in the 2016 study, 84% reported experiencing prejudice, harassment or discrimination based on their gender. Only about half of PC(USA) church members think gender inequality is a problem.

“How do you explain this disconnect?” asked Hinson-Hasty. “In this video series we will be asking women in leadership roles in the Presbyterian Mission Agency and Presbyterian Women, based on their interactions with leaders across the denomination, what are some of the most effective ways they see pastors and other leaders addressing this disconnect?”

Other areas to be explored in the video series include identifying movements and people raising important questions of gender and leadership. How does racial equity fit into that conversation?

Hinson-Hasty says that it is important that women’s voices across the church are heard in response to the issues and findings raised in the study.

Download the “Gender and Leadership in the PC(USA)” study here.