Christmas Joy Offering – Supporting our leaders: past, present and future.
Make A Donation Click Here >
Home › Dr. William Yoo, a seminary professor and author, helps the PMA Board take an honest look at Presbyterian complicity in slavery and anti-Black racism

A discussion of Yoo’s new book, ‘What Kind of Christianity,’ dominates the second day of the Presbyterian Mission Agency Board’s meeting at Stony Point Center 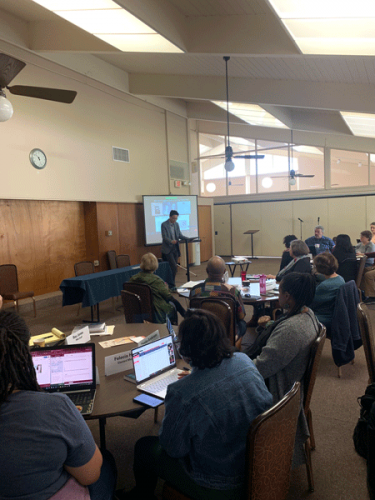 STONY POINT, New York — In the first paragraph of his new book “What Kind of Christianity: A History of Slavery and Anti-Black Racism in the Presbyterian Church,” Dr. William Yoo includes this question first raised by the Rev. Dr. Katie Geneva Cannon:  “Where was the Church and the Christian believers when Black women and Black men, Black boys and Black girls, were being raped, sexually abused, lynched, assassinated, castrated and physically oppressed? What kind of Christianity allowed white Christians to deny basic human rights and simple dignity to Blacks, these same rights which have been given to others without question?”

It was that second question especially that grabbed the attention of members of the Presbyterian Mission Agency Board on Thursday during the board’s meeting at Stony Point Center in New York’s Hudson River Valley. Yoo, Associate Professor of American Religious and Cultural History and Director of the MDiv program at Columbia Theological Seminary in Decatur, Georgia, led three sessions discussing his book, published last month by Westminster John Knox Press.

Some people have called Yoo’s work, in which he discusses the complicity of the majority of Presbyterians in promoting, supporting, or willfully ignoring the enslavement of other human beings during the early part of the 19th century, a “fearless book,” Yoo told the board. “I didn’t set out to write a fearless book,” he said, “but that’s where the research led.”

Yoo works to debunk several misinterpretations of history. One is that “white Presbyterians didn’t know how bad it was” for their enslaved siblings of color. If they’d known, according to the myth, white Presbyterians would have done something about it. “Many white Christians defended slavery so vigorously,” Yoo writes, “that some Black and white abolitionists identified white churches as the most impenetrable strongholds against their cause.”

Another is “the gross miscalculation on the stakes and consequences of slavery,” Yoo writes. “In subtle yet perverse forms, white Presbyterians have expressed that the most tragic result from the age of Black enslavement is the division of their church,” a division that lasted from the Civil War era until 1983. While many Presbyterians lament that century of division, “one struggles to find the requisite anger over the pain and torture that millions of enslaved persons suffered from white Presbyterian enslavers, supporters of Black enslavement, and guilty bystanders who chose to be complicit through inaction and indecision,” Yoo writes.

“It was sin for our Church not to separate sooner,” Yoo told the board. “It would have been more faithful to separate.”

Board members and some PMA staffers didn’t hesitate to offer their own ideas. 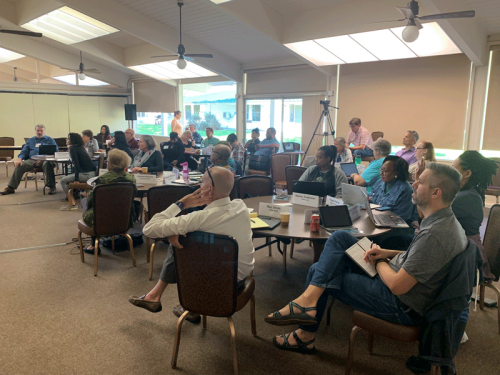 “When will we as a denomination take the next steps?” said the Rev. Dr. SanDawna Ashley. “We are preaching to the choir in so many ways. … Even the people who are the most ‘woke’ have microaggressions when their power is challenged.”

“I’ve been a fan of yours for a long time, and it took me three days to get through Chapter 1 because I was so traumatized,” the Rev. Denise Anderson, the acting director of Racial Equity & Women’s Intercultural Ministries, told Yoo. “It infuriates me to read the documentation you offer.”

“I want this to be required reading,” Anderson said of Yoo’s book. “God has been far too patient with us.”

“A book like this can only be written by someone like you. Had it been written by a Black person, it would have been rejected out of hand,” said the Rev. Gregory Bentley, Co-Moderator of the 224th General Assembly and a board member. “I thank God for what you have done and I hope the church receives and acts on this in a faithful way. It’s up to us if we repent and repair what’s been done or go the way of all flesh.”

“So many colleagues in parish ministry are afraid to speak the truth,” said the Rev. Michelle Hwang, who co-chairs the board. “It’s up to us preachers not to keep preaching niceties. We have to preach the truth.”

The other board co-chair, the Rev. Shannan Vance-Ocampo, said one system “that worries me is we keep elevating leaders we should not be elevating. We put people in places of power who choose not to be educated or to be brave, or are actively hurting and harming other people,” leaders “with no care for the Earth or where we show up in empire.”

The Rev. Dr. Diane Moffett, the PMA’s president and executive director, reminded everyone that Jesus requires us to take up our cross and follow him. “We act like that’s not real,” Moffett said. “For Black folk in particular, there are two basic things that happened in the founding [of the nation]: land theft and the kidnapping of Black labor, and chattel slavery.”

“There are Latin and Middle Eastern people being exploited by this system, and that’s what you’re laying bare,” Moffett told Yoo. “We can put water in front of a horse, but if the horse won’t drink it takes the Spirit to transform it in a powerful way. It doesn’t always look like victory, but on the other side there’s something so much better.”

“At the end of the day, it’s about reparations, and as this book has said, it’s all about money,” Hwang said. “If we are going to do what’s right, we need to take funds from churches that are being sold and direct it to communities of color.”

It’s hard, Yoo said, when there are “competitions rather than coalitions. It’s hard when 9% of Presbyterians [the percentage of Presbyterians who are people of color] are competing for 9%. That’s pretty messed up.”

“I want to get beyond saying, ‘My cause is more important than your cause,’” Yoo said when asked about justice for groups other than the descendants of those formerly enslaved.

After discussing the book further in small groups, some board members and staff members reported out to the larger group.

“The church has been complicit not only in the enslavement of people but keeping the story so it’s justifiable,” said Ken Whitehurst, a board member. “We have started down the road with Matthew 25, but we’ve got to take it beyond this room to presbyteries and congregations and people in the seats so they realize there’s more to history than they’re being told, or that history [that’s being taught] is wrong and pernicious. We are in a position to do that. We’ve got to take this book and put it not on our shelves at home, but to start the dialogue. … We need to let people know they are not disconnected from this story.”

Noting that Theology, Formation & Evangelism is holding an evangelism conference Oct. 30 through Nov. 1 at Montreat Conference Center, TFE Director the Rev. Dr. Ray Jones III said Presbyterians ought to be “on a larger, more expansive path that includes all of life, not just the afterlife.” Not fighting for justice in this life “is a complete disregard for someone else’s spirituality,” Jones said.

Anderson wondered “what we’re doing” when we offer a prayer of confession each week during worship. “How have we not developed the muscles to grapple with this part of ourselves? It feels like we’re faking. We’re just playing church.”

“Being prophetic is pastoral, and being pastoral is prophetic,” said the Rev. Dr. Dee Cooper, a board member. “When we separate them out, we do injustice to both, and to the gospel.”

“If you can’t tell the truth as a pastor or preacher, you might be working in the wrong job,” said the Rev. Shavon Starling-Louis, Co-Moderator of the 225th General Assembly. “I just think we have to be church. Our children are watching us, and what we aren’t saying is as important as what we are saying.” 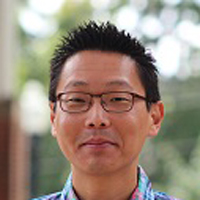 “My sense is this will be a drama of conflict,” Yoo said, drawing a squiggly line as a representation of how history often happens rather than the diagonal line of progress many of us imagine it to be. “People won’t say, ‘Diane, that’s a really good point. We’re going to do that.’ Some will hate it and resist it. We should not be surprised by and fear conflict.”

“The more you want change, the more there’s going to be resistance,” Yoo said. “That’s not good news, but it’s nothing to be surprised by,” he added, quoting Romans 12:3, where Paul advises Christians in Rome to “think with sober judgment.”

“That’s the gift,” Starling-Louis said. “Being able to look at real history.”