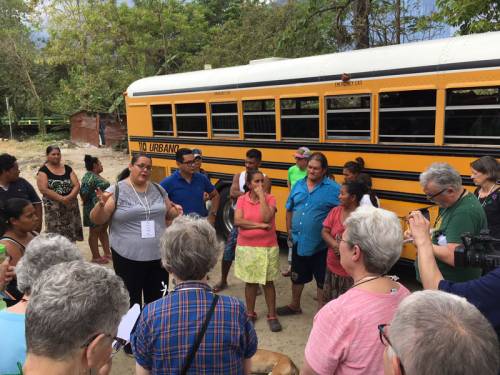 A 72-person delegation, including four Presbyterians, returned this week from a trip to Honduras to learn firsthand the root causes of migration. (Contributed photo)

LOUISVILLE — A delegation of 72 faith leaders and immigrant justice advocates returned from Honduras this week following a week of meetings with grassroots and religious partners to better understand the root causes of migration that have led thousands to flee Honduras.

The international, interfaith delegation — which included Catholics, Protestants, Jews and Buddhists — was co-sponsored by the Interfaith Movement for Human Integrity, SHARE El Salvador, Sisters of Mercy, and the Leadership Conference of Women Religious.

Honduras, which shares borders with Guatemala, El Salvador and Nicaragua, is one of the poorest countries in Latin America. Delegation members said they found Honduras to be a country of extreme economic inequality, widespread poverty and rampant corruption. Wealth and power are concentrated in 12 families. Nearly 70 percent of the population lives in poverty. 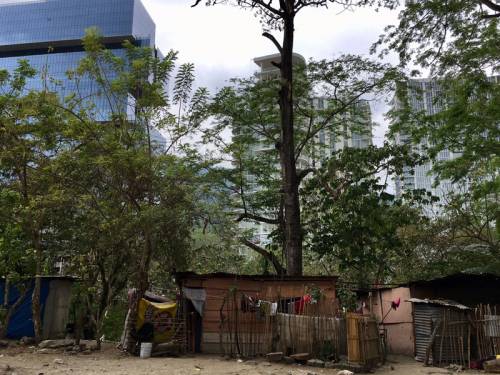 Delegation members met with poor communities being threatened with displacement by mining companies, hydroelectric projects, agribusiness, real estate developers and the tourism industry. Asked what message the Hondurans wanted delegates to take back to the U.S., the answer was always the same: Stop sending U.S. military and police aid to the Honduran government.

“U.S. weapons are killing our women and children,” one Honduran said. “We don’t need more guns! We need hospitals and doctors. We need schools and teachers.”

Members of the delegation shared these concerns with the chargé  d’affaires at the U.S. Embassy in Tegucigalpa and said they plan to communicate with members of Congress as well.

Even amid the great difficulties and challenges Honduras faces, delegation participants found hope in the strength and courage of the many Hondurans they met who, day in and day out, defend human rights, protect the environment, care for children and youth, empower women and promote alternatives to violence.

The dates of the delegation coincided with the 39th anniversary of the assassination of Monsignor Oscar Romero of El Salvador, who was a prophetic voice of justice for the poor. To mark the occasion, the delegation joined Hondurans in a theological forum, a cultural celebration, a “stations of the cross/crisis” procession and a Catholic Mass, all in honor of Romero, who is now revered by Catholics worldwide as Saint of the Americas.

Presbyterians interested in learning firsthand about the root causes of migration may be interested in the Central America Travel Study Seminar being organized by the Presbyterian Peacemaking Program. Participants in “Central American Migrant Trails: Exploring the Journeys to and from the United States and Why We Must Act” will visit El Salvador, Guatemala, and Honduras, February 17-28, 2020. Applications are due by October 1, 2019. For more information, click here or contact the Presbyterian Peacemaking Program staff by emailing peacemaking@pcusa.org or by calling 888-728-7228 x 5805.