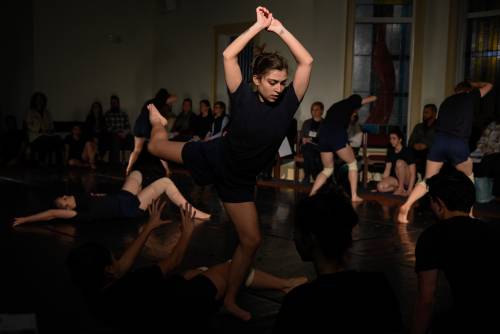 Emory University-based Staibdance presented “Moat,” based on director George Staib’s immigration  to the U.S. from Iran, at Columbia Seminary in Decatur, Georgia as part of the Migration and Border Crossings seminar Friday. (Photo by Rich Copley)

But participants in the Migration and Border Crossings conference at Columbia Theological Seminary saw both Friday night when the Atlanta-based troupe Staibdance presented two performances of its original work “Moat.”

The dance followed a day of talks and workshops focused on immigration and migration, including sessions with Presbyterian Disaster Assistance and the PC(USA) Office of Immigration Issues, putting into movement what speakers had been putting into words all day.

The work is inspired by director George Staib’s experience immigrating to a small town in Pennsylvania from Iran during the Iran Hostage Crisis from 1979 to 1981.

“Fueled by heightened anti-Middle Eastern sentiment in the United States, some locals reacted with hostility, throwing tear gas in the family’s yard and bullying the kids at school,” a description of the work said.

As the performance started, the stage in the Seminary’s Harrington Center Chapel was lined with 200 pounds of brick red rubber mulch that, in dancers’ hands and under their feet, became that tear gas, borders and land masses. The dancers portrayed gritty confrontations and painful separations that are part of many migrant stories, including Staib’s experience. 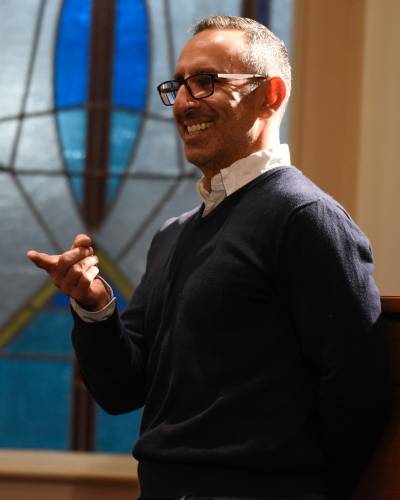 Following the half-hour performance, Staib told the crowd how he remembered his grandparents standing and watching them leave Iran. His mother could not look back at them.

“He never told us about that, when we were developing the work,” dancer Anna Bracewell Crowder said. “But we knew this was true to the experience.”

While she said Staib is “really specific with his imagery,” Crowder and Staib both said the development of “Moat” was a purely collaborative experience with the troupe. That, they said, was a key to making the story more universal.

The company began performing “Moat” in 2016 and had been developing it before that. Staib and Crowder said that as they rolled the work out, they were keenly aware that immigrants and immigration issues were returning to national headlines.

“It only gets more relevant by the day,” Crowder said. “We’ve been doing it and adapting it for three or four years, and what we see happening makes it clear we need to keep doing this.”

Through the dance, the audience sees struggles of travel, assimilation and cultural preservation, violence and isolation. At one point, the dancers lie still on the floor, their heavy breathing from the struggle filling the air. 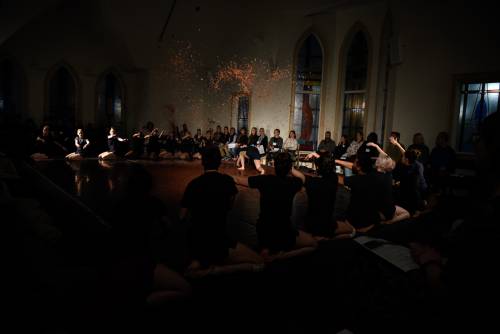 In the modern dance piece “Moat,” dancers threw mulch and manipulated it to form boundaries and land formations to help tell the story of an immigrant coming to a new community. (Photo by Rich Copley)

One viewer commented after the show that she initially thought, “this is the weirdest thing I’ve ever seen,” and regretted not sitting closer to the door. But as the work unfolded, “I got a grip on what the story was, and I was really immersed in all of the movements. It was just magical.”

Talking after the performance, Staib said, “It feels extra poignant right now. This is an experience many people are having every day.”

Tens of millions of people, as the conference participants had been hearing in various sessions.

Staibdance had been approached about performing “Moat” at the conference more than a year ago, and Staib said he was excited both to return it to its original in-the-round presentation and to present it to such a specific audience.

“It feels like an audience that will really understand using movement to tell the story of this upside-down world,” Crowder said. “We’re using our words.”