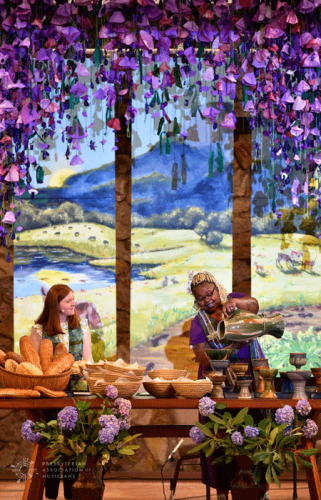 LOUISVILLE — During closing worship Friday at the Presbyterian Association of Musicians’ Worship and Music Conference, the Rev. Aisha Brooks-Johnson encouraged those present, in person and online, to become advocates for healing.

In preaching from II Kings 5:1-19 and Luke 8:40-56, which detail three healings — one by Elisha, a prophet of God, and two by Jesus — Brooks-Johnson confessed that she is one of those people who lives with a pair of chronic health conditions.

She’s had type 1 diabetes for more than 30 years and rheumatoid arthritis for almost 10 years. She’s doing better now thanks to her insulin pod and glucose meter. And after not being able to walk or even tear the communion bread or raise the cup, she’s found medicine that works for her arthritis.

Because of she lives with chronic health conditions, she said she loves hearing healing stories in the Bible.

“The first thing we need to become an advocate of healing is to trust that God is a healer,” she said.

Because when we trust that God is in the healing business, Brooks-Johnson believes our attitude, our outlook, and our language change, which keeps our hearts open to the way that God is always doing something underneath the surface and in God’s own time.

Secondly, to be an advocate of healing we need to tell others that God is a healer, even if healing takes time.  She told the story of gospel musician Richard Smallwood. During a live performance, he spoke about friends who’d told him they had lost both of their parents in a span of four weeks. Because they were hurting, they wanted a song about healing. But Smallwood didn’t have one. So, they asked Smallwood to pray on it. Two weeks later, he said he received this song in a dream.

The lyrics of “Healing” include:

There is a balm in Gilead, Brooks-Johnson said, reminding worshipers to remember the courage of the servant girl In Israel who been captured by the army Naaman commanded.  Now she served his wife. Hearing that this mighty warrior had leprosy, the young girl boldly tells him to go to the prophet Elisha for healing. 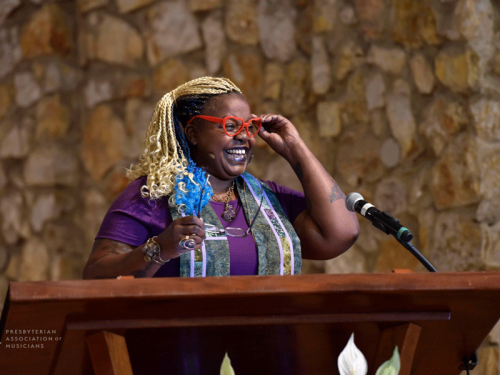 The Rev. Aisha Brooks-Johnson is executive presbyter of the Presbytery of Greater Atlanta. (Photo by Katherine Kupar)

“She spoke truth into his life, and we must tell those who are sick that God sees them,” Brooks-Johnson said.

When she sees how people are cut off from access to quality health care, how they’re forced to choose between prescriptions or food, and how they have limited services for needed rehabilitation, Brooks-Johnson wants to tear down the barriers to their healing. This, she said, is the third way to practice becoming advocates for healing.

Brooks-Johnson suggested the woman whom Jesus healed in the Luke passage was probably always lurking in the background, labeled as “the sick one.” When she made her choice to touch a piece of Christ’s clothing, Jesus lifted her out of the shadows. He gave her the opportunity to testify to her healing and called her “daughter” for participating in her miracle. As Jesus was talking with the woman, word came to Jairus, the ruler of the synagogue in Capernaum, that his daughter had died.

But Jesus was on the way to heal again, and he was right on time.

“His presence removed every barrier to her sickness,” Brooks-Johnson said. “Even as a household of naysayers laugh, he tells the little one to arise.”

When she was younger, Brooks-Johnson watched “The Wizard of Oz” every year. Then she got introduced to “The Wiz,” a kind of blues and jazz folk rendition of one of her favorite movies. Before asking for an “Amen,” she asserted, “There isn’t nothing like the one with Michael Jackson, Diana Ross and Nipsey Russell.”

When the Wicked Witch of the West is finally defeated, sunlight begins to move in for people working in a factory. As they unzip out of their unbecoming costumes, they step out in gold shiny outfits.

And then the music starts. “Can’t you feel the brand new day?” Brooks-Johnson sang.

There’s something about that image of offering people freedom and the kind of healing that sets people free “from every weight that keeps them bound,” Brooks-Johnson said.

“It’s a brand-new day for healing, for possibility and for peace,” she said. “Can you imagine it?”