CINCINNATI — The gift of $22,000, which after legal fees would be worth around $250,000 in today’s dollars, was given to Knox Presbyterian Church in Cincinnati exactly 100 years ago to aid the congregation in constructing a new church. But according to Knox’s pastor, the Rev. Adam Fronczek, there was “some lore” in the congregation about the gift, which came from a woman who wanted to be buried inside the walls of the church. 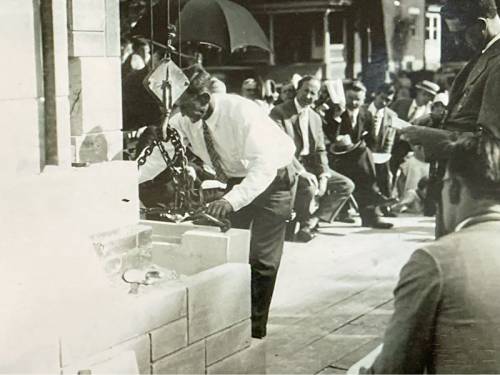 One hundred years ago, Knox Presbyterian Church in Cincinnati accepted a racist gift which helped the church construct its new building. The will, from a woman who wanted to be buried in the walls of the church, said her gift was to be for “a church of the white race only.” (Courtesy of Mike Fitzer/Film 180)

According to ruling elder Maggie Gieseke, it was important to Knox’s Racial Justice Task Force to begin working toward dismantling structural racism, one of the foci of the PC(USA)’s Matthew 25 vision, into the fabric of the congregation.  So instead of giving a bunch of money and then walking away, they asked each other, “How do we make this part of our church?”

One of ways racism works, Fronczek said, is the harm caused by many progressive white people who want to look back at history and have “a knee-jerk reaction” to a story like this by saying, “That’s not who we are anymore. thanks be to God. If this happened again, our congregation would react differently.”

“But who knows if that’s true?” he said. 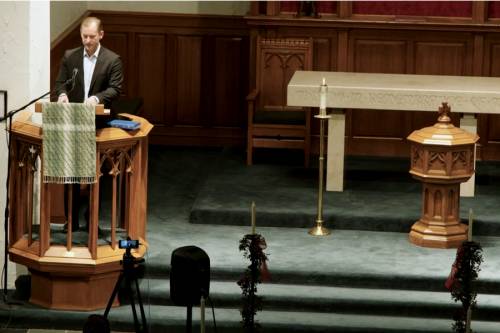 In June 2020, the Rev. Adam Fronczek preached a sermon designed to get the congregation working on dismantling systemic racism. (Photo by Mike Fitzer/Film 180)

In his June 2020 sermon, “Confronting the Truth About Racism,” Fronczek addressed white people’s reactions to stories of racism like this and the steps the church’s session was taking to confess and lament Knox’s racist history.

“We may have changed our hearts and do not believe in the same racist things people thought in the past, but the reality is that we took the money. One hundred years later, we continue to benefit from the property that was built with that money and the way its value has grown over time. We know that the benefits of a gift like this keep growing — and we could not have accepted the money in the first place except that we were white.”

Knox member Heidi Knellinger had an “immediate, visceral reaction” to the news that Knox had taken such a gift.

“I’m an emotional person. I’m a fixer,” she said. “The importance of it has become more internalized for me. I notice that I see injustice and racism now everywhere.” 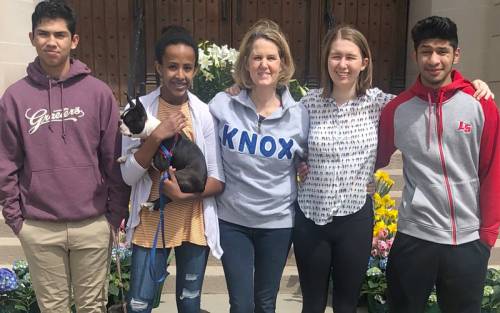 Maggie Gieseke was angry when she heard Knox Presbyterian Church had accepted a racist gift 100 years ago. Her family includes birth children, two sons from Guatemala and a daughter from Ethiopia. (Courtesy of Mike Fitzer/Film 180)

Gieseke was also upset by the news, saying she was “moved to tears.” She and her husband are the parents of three birth daughters as well as two sons from Guatemala and a daughter from Ethiopia. Knowing how much the church is a part of their lives and how they would’ve been disqualified back then from participating at Knox upset her.

Gieseke acknowledged that conversations about the story and structural racism have been hard work, both emotionally and spiritually. But the session believes it is necessary work, Gieseke said. Racial justice needs to be addressed, looked at and studied, she said, because “we need to do our best to change it.”

Some of Duke’s “heart learning” comes from just observing Knox’s 20-year relationship with a largely Black congregation, Third Presbyterian Church in Cincinnati, and noticing the inequities in the two church’s neighborhoods. 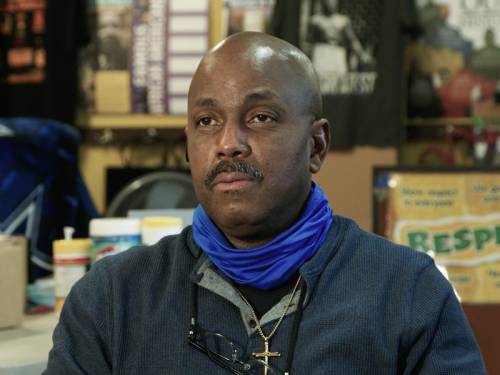 Third Presbyterian Church Ruling Elder Rodney Christian was “a little bit sad” when he heard the news about Knox accepting a racist gift 100 years ago, but said he felt confident about the long-term relationship he’s had with Knox for more than 20 years. (Photo by Mike Fitzer/Film 180)

Fronczek said one of the hardest things about the long history Knox has with Third is to look back and wonder, “How many times they were the white church helping the Black church, throwing their weight around and unaware of the ways they’d been doing things that are hurtful?”

He hopes and prays the acknowledgment of Knox’s racist history and present structural racism will continue to open up the conversation with Third so that the congregations can continue to be in ministry together.

“So that we can really be engaged with what their community knows they need and work together to meet those needs,” he said, rather than “working on some partnership that prioritizes us.”

As Fronczek looks at the Matthew 25 invitation and its emphases, he said it’s important to acknowledge the role structural racism plays in the realities of systemic poverty, and to look at congregational vitality to see how excited most Knox members are to have a conversation that they feel is real and important.

For Kerry Duke, that conversation is vital.

“I have a niece who’s married to Black man who lives in primarily a white neighborhood,” he said. “And it’s disturbing. There was one month where my niece tracked — he was stopped 17 times in one month on his way home from work by the same police officer in Louisville, Kentucky. So, it’s personal.”