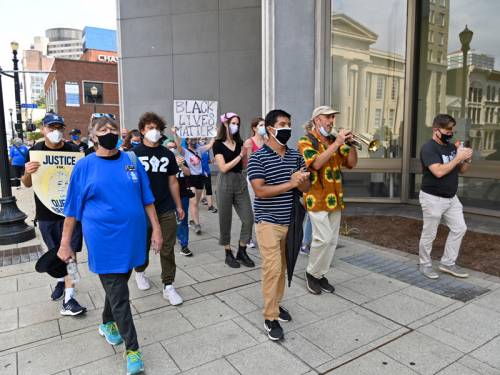 About 150 Presbyterians and their partners marched for racial justice in downtown Louisville, Kentucky,  onAug. 29 as part of the Presbyterian Week of Action. (Photo by Rich Copley)

LOUISVILLE — Leaders of the Presbyterian Church (U.S.A.) called the decision of a Louisville grand jury to indict only one officer involved in the death of Breonna Taylor on three counts of wanton endangerment “a travesty.”

“Our hearts break today upon the news that a grand jury will not seek stronger charges against the police officers involved in the shooting death of Breonna Taylor in Louisville, Kentucky,” said a statement signed by  officials in the Presbyterian Church (U.S.A.) national offices, located in Louisville, and Mid-Kentucky Presbytery, which includes Louisville. “The senseless death of this young woman has enraged this community and prompted thousands, including many Presbyterians, to take to the streets to call for justice in the last several months. And yet, today’s news of only three charges of Wanton Endangerment only makes us feel that our cries have fallen on deaf ears.” 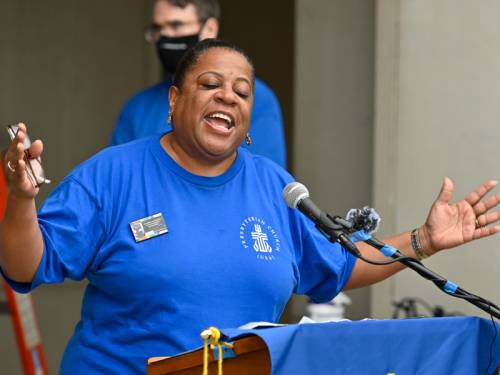 “We aren’t being political” by rallying, the Rev. Dr. Diane Moffett, president and executive director of the Presbyterian Mission Agency, told the crowd during the Aug. 29 march and rally. “We are being deeply spiritual and moral.” (Photo by Rich Copley)

“We grieve with Breonna Taylor’s family and continue to lift them up in prayer as her community seeks to heal,” the statement continued. “This is a travesty. People of color should not have to live in fear of those who are called to protect and serve.”

Taylor, who was Black, was killed on the night of March 13 when three Louisville Metro Police Department Officers served a warrant at Taylor’s apartment. In an exchange of gunfire with Taylor’s boyfriend, Kenneth Walker, Taylor was shot six times and died from one of the gunshots. Walker, a licensed gun owner, said he fired believing the officers were intruders.

Kentucky Attorney General Daniel Cameron said Wednesday the warrant was a “knock and announce” warrant and that an independent civilian witness verified that the officers did announce themselves. Walker has maintained he did not hear the officers identify themselves.

The grand jury indicted Det. Brett Hankison, who was fired from the LMPD June 23, with three counts of Wanton Endangerment with “extreme indifference to human life.” No charges were returned against the other officers involved in the fatal incident: Sgt. Jonathan Mattingly and Det. Myles Cosgrove.

Hankison faces up to five years in prison on each count if found guilty and posted a $15,000 cash bond Wednesday.

On Sept. 15, the City of Louisville agreed to pay $12 million and institute a series of police reforms in response to a wrongful death lawsuit brought by Taylor’s family.

Taylor’s death, along with that of George Floyd in Minnesota, has sparked a summer of protests against police violence against people who are Black and against systemic racism across the country. In Louisville, the PC(USA) Bearing Witness Committee organized an Aug. 29 rally at the Presbyterian Center in Louisville and march to Jefferson Square Park, which has served as a memorial to Taylor. 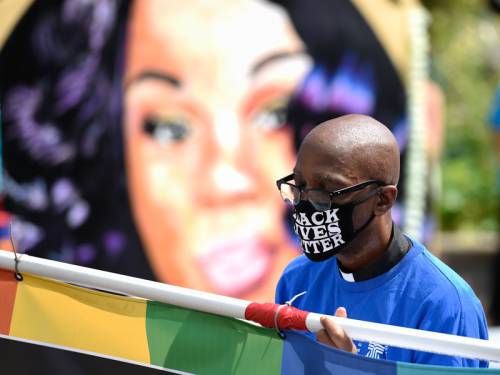 The Rev. Dr. J. Herbert Nelson, II, Stated Clerk of the General Assembly of the Presbyterian Church (U.S.A.), observes 8 minutes and 46 seconds of silence in Breonna Square on Aug. 29 (Photo by Rich Copley)

“There’s not an individual to blame,” Nelson said, speaking at the end of the rally. “It’s a system all across the United States of America of people making money off of the vulnerable and those who have been dislocated. … In the end, people die on the vine, and we turn the page on another chapter in the same story.”

One of three goals of the Presbyterian Mission Agency’s Matthew 25 invitation is dismantling structural racism, and the church has established many offices and activities to combat racism and affirm communities of color, including anti-racism training, advocacy work, and programs specifically designed to lift up marginalized communities.

That, the statement said, is the work of the church, which starts with acknowledging its own past.

“As Presbyterians, we honor all people as children of God; but we, in reality, have succumbed to pride, selfishness, and the love of power. Our history is replete with racial pride that has undergirded generations of exploitation of people of color, more often than not, to drive economic engines that have fed our privileged way of life.

“How can the Creator be pleased with this aspect of our history? The only proper response is repentance — what our scriptures call ‘turning around.’”

In acknowledging the church’s own history, the Presbyterian leaders also urged the church to be part of demanding and facilitating change, in Louisville and beyond.

“We pray that government leaders in Louisville will work to improve community building, address racism and focus on the growing problem of violence involving guns,” the statement said. “It is our responsibility to bring about change and redeem those who have been lost, damned, and dejected.

“Let’s stop sitting on the sidelines and get busy doing the work of transformative justice in the U.S. so all people may be free.”

PC(USA) and Mid-Kentucky Presbytery leaders were working Wednesday to determine if there will be any further observances in the wake of the grand jury decision. Presbyterian News Service will share details of any plans.