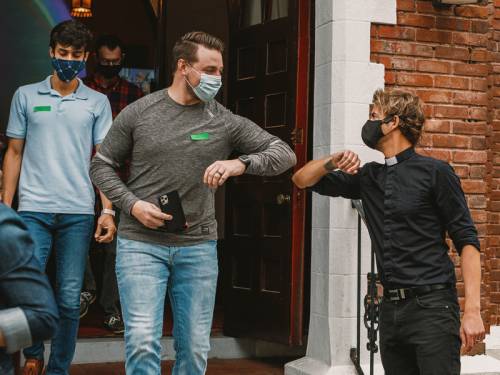 The Rev. Colin Kerr greets congregants as they depart from Sunday worship. Parkside Church in Charleston, S.C. has been conducting worship at 20% capacity with mask wearing and temperature checks. Nearly every person who joined the church since the pandemic began attended multiple services before committing. (Contributed photo)

LOUISVILLE — The Rev. Colin Kerr of Parkside Church in Charleston, South Carolina is in awe of what happened at the church plant he serves. When this new church development began, it began growing steadily. But just six months into that growth, the pandemic hit.

As everything was shutting down in Charleston, his new book, “Faith Hope Love: The Essentials of Christianity for the Curious, Confused and Skeptical” was released. Written originally as a disciple evangelism tool when Kerr was serving college students who were deconstructing from faith, the book quickly found a niche audience during the pandemic among people who were socially isolated and increasingly disillusioned by what many saw as an incompatibility between following Jesus and right-wing politics.

Since that last week in March 2020, Parkside has celebrated two adult baptisms. More than 30 people have joined the church.

“It’s really been amazing,” he said, “because as Parkside’s founding pastor I knew the coronavirus had the potential to wipe out a baby church like ours.”

During those early months of the pandemic, Kerr was concerned about avoiding the fate of other new church plants in Charleston. A friend who started a church at about the same time as Parkside launched saw the church close. Two other new churches, one Anglican and the other a satellite campus of a megachurch, were also victims of COVID.

Kerr had some ideas on how to keep Parkside going. Because people were struggling to connect, he felt like Parkside had to be creative about the centrality of relationships by taking advantage of opportunities to connect with people in the most authentic way possible. With the coronavirus taking away the person-to-person worship experience that had been centered on live music and the weekly communal experience of the Eucharist, Parkside doubled down on creating a quality Sunday livestream experience with real-time interaction on Facebook and  live question-and-answer sessions during the service.

Kerr moved the church’s small groups to Zoom and eventually outdoors, particularly leveraging a weekly collaborative sermon creation process with other congregants. He also had a different congregational leader preaching every month so that online worshipers could hear other voices besides that of a white male. 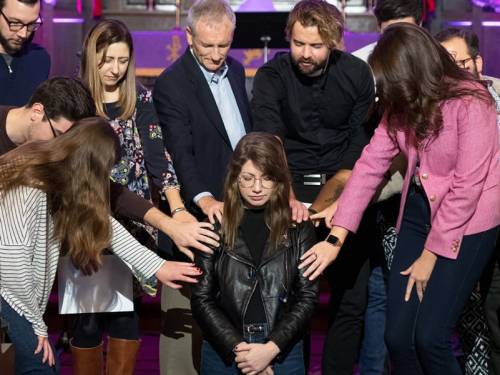 Tara Collins is installed as the Director of Worship and Creative Arts at Parkside Church. Collins also serves on the preaching team, which consists of women, BIPOC, and LGBTQ+ voices. (Contributed photo)

Yet in spite of Parkside’s heavy emphasis on producing a high-quality interactive livestream, Kerr came up with one more idea that was viewed as especially risky by church leadership and presbytery oversight. As the weather got nicer, he decided to take a two-month sabbatical from preaching during the summer of 2020 to focus on intentional evangelism.

“Initially it was born out of desperation because I felt like if we didn’t reach out and connect to the community, we would have to die,” he said.

Kerr had used social media to grow a multi-campus college ministry at College of Charleston and The Citadel. So, he began to do what he’d learned and was natural to him. Whenever someone new checked out Parkside’s online service — even with something as remote as a “like” — he would direct message them. 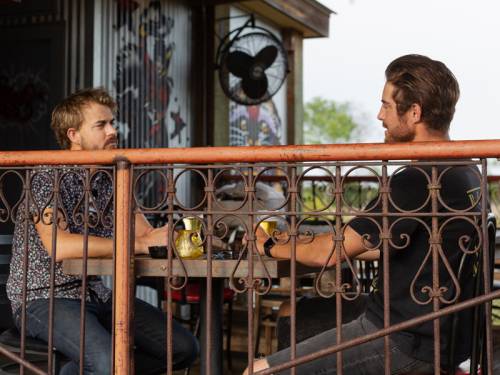 “I mean the worst thing people can say is no,” said Kerr, laughing. “Or you can have coffee or a beer and they can find out if they are a fit for the community you’re trying to create.”

Kerr found these outdoor in-person meetups highly enjoyable — and successful. He estimates that about 90% of the people he met with over the summer have joined the church and are now actively involved in Parkside’s mission.

“It’s reinforced what I believe — that people are desperate for relationship,” he said. “Last month a woman joined who had never been in the building. She’d been watching for five months, but meeting for coffee was enough.”

Parkside is meeting for in-person worship at about 20 percent capacity now and has also gone to in-person Bible study. But even after they go back to a more familiar in-person service, they will continue to livestream their services so that people can visit and interact with Parkside without setting foot in the building.

“In this post-church culture, people have had enough trauma,” Kerr said. “They don’t want to come into a church until they determine if your community is safe enough for them to do so.” 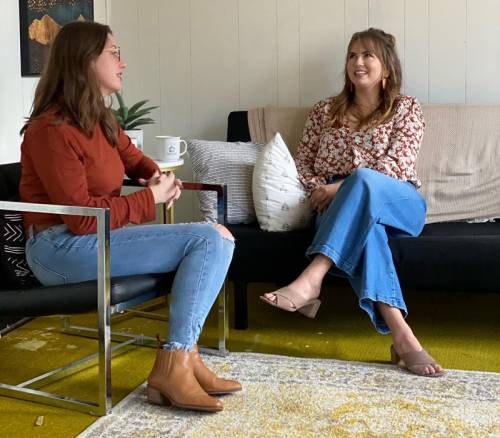 Tara Collins, Director of Worship and Creatives Arts, sits down with Molly Phillips for the weekly “Meet the Parksiders” clips. The sessions are brief introductory interviews with new participants in the church. (Contributed photo)

As Kerr reflects on strategies used to keep a new church alive, he’s noticed something else about spirituality: many of the people joining Parkside during the pandemic did so because of the church’s commitment to welcoming LGBTQIA+ people. They’ve said things to Kerr like, “I’ve been disturbed that the church I was at was not inclusive in this way” and “You are more welcoming” and “I’ve had tension with myself wanting to integrate my ethics more into my local church.”

Hearing those comments — and seeing a recent study which found that 1/3 of practicing Christians have stopped going to church during the pandemic and another 17 percent are checking out other local churches — helped Kerr get a clearer understanding that Parkside’s communal vision must also be a moral one.

“The pandemic is acting as sifter for people’s ethical and political concerns in regard to the local church,” he said. “So, if somebody is an anti-masker, they’ll start supporting a congregation that isn’t wearing masks. If they support Black Lives Matter, they’ll find congregations that preach on racial justice.”

Unfortunately, this “big sift” isn’t necessarily a net positive for PC(USA) churches. Apart from losing some congregants by requiring mask-wearing, Kerr recounts, “When we preached on racial justice, it was easy — because of the pandemic — for a few of our people to disconnect from our community and find another one that didn’t.”

But because of the clarity of communal and moral vision, and because they’ve been intentional about who they’re helping, giving at Parkside has been up 50% since the pandemic began.

“We gave thousands of dollars in direct aid to single moms and started e-learning labs for students in our neighborhood,” he said. “As difficult as this COVID has been, this has been a great opportunity for people to find and commit to a church — not out of typical consumer preferences, but because they really believe lives are being changed and the gospel is being lived out.”

Parkside Church received support from the Presbyterian Mission Agency in the form of a Mission Program Grant made available through  Racial Equity & Women’s Intercultural Ministries. The grants support the transforming work of new worshiping communities and mid councils.