Make A Donation Click Here >
Home › From blacksmiths to lawyers, professional services are in demand at Standing Rock 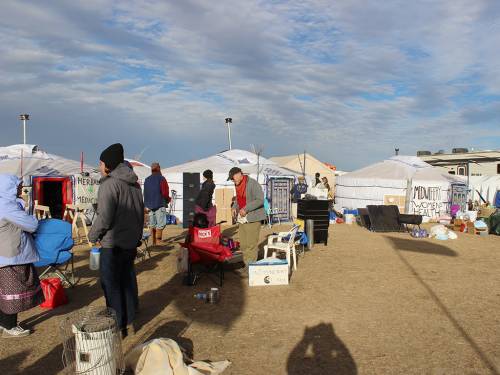 LOUISVILLE – The recent altercation between water protectors and law enforcement at Standing Rock proved the value of having professionals on site. Lawyers and medical personnel have been busy the past few days dealing with the legal and physical issues around Sunday night’s confrontation and the use of tear gas, rubber bullets and water cannons. But those are just a few of the professionals who have brought their talents to the camp to assist during these difficult days.

More than 3,000 people are preparing to spend the holidays fighting cold, windy conditions in Cannon Ball, North Dakota. Some have been there since April as the Standing Rock Sioux tribe began its efforts to stop the construction of an oil pipeline along the reservation border. Others have come for brief periods of time to work, share their support and return to their homes.

During a recent visit, a delegation of Native American Presbyterian leaders and supporters had the opportunity to tour the camp and meet with many of the people who have chosen to bring their skills and talents to the table.

“Little cottage industries have sprung from this movement, harnessing people’s talents and gifts,” said the Rev. Irvin Porter, associate in the Office of Native American Intercultural Congregational Support. “They’re helping other Native Americans learn how to cope with the conditions and organize to make things happen.”

At the Oceti Sakowin Camp, a young blacksmith stokes a fire in preparation for a long day’s work. “I work on just about everything the people need here and we are keeping busy. Right now, I’m creating about 200 tent stakes.”

A local company has provided approximately 80 portable toilets for the camp, but once the temperatures plummet and the units begin to freeze, the company will have to remove them. Groups have organized to build smaller, portable composting toilets, similar to what is sent around the world to communities impacted by natural disasters. Other companies provide dumpsters for trash, and freshly cut trees for firewood. 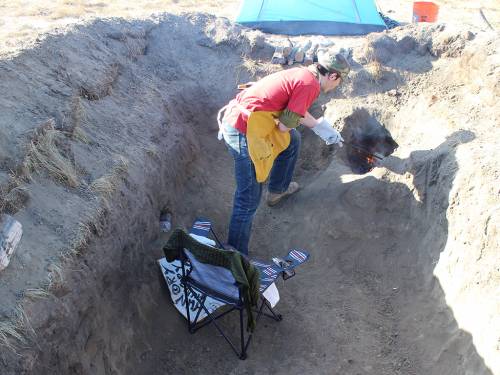 A blacksmith stokes the fire to begin creating 200 tent stakes at the camp. (Photo by Rick Jones)

There are many families in the camps and children are given the opportunity to attend one of many small schools on site. Lindsey McClure-Miller traveled to the camp with her husband to work with children, creating a space for them to share their stories.

“This land has endured a lot and I believe it is speaking loudly to people who are willing to listen and want it to remain the way it is, in partnership with people,” she said. “This land doesn’t want to be transporting anything in a pipeline, especially under a river.”

On the day of the delegation visit, many of the children were on a field trip. Several tents have been constructed to provide children a learning atmosphere.

Angela Bibens is a lawyer of Santi Sioux heritage. She visited the camp earlier in the summer with her children and felt called to provide her services to those who need it. Now, she is the ground coordinator for the Water Protector Legal Collective.

“I’ve been coordinating the court support for 15 water protectors who have been charged with felonies and their first appearances in court are taking place now,” she said. “There were 25 arrested last week and 19 of those individuals face Class C felonies for tampering with a public service. The action involved praying at a set of railroad tracks.”

Bibens thinks the local prosecutor’s office is over charging the group in hopes of intimidating them to leave.

“I don’t know how this will be resolved because the prosecutor has not shown any sign of loosening up and that means many people now face felonies,” said Bibens. “We don’t have a lot of attorneys right now and that is a huge issue. We are working with the Indigent Defense Council and are up to our earlobes trying to help people who are very panicky because they have no representation.”

Bibens says National Lawyers’ Guild has been very involved in the legal support and several attorneys have come to assist. She adds they could always use more.

“They have to make a week-long commitment to be vetted through our volunteer coordinator,” she said. “We have international, criminal and civil working groups,” she said. “However, there are not as many lawyers as we would like to see who are interested in handling these cases.”

Bibens adds they have some hope after sending a letter to the Bank of Norway, asking authorities to evaluate the bank’s $285 million investment in the Dakota Access Pipeline. They’re hopeful of a conversation with the bank in weeks to come. She has been leading the efforts to help those arrested during the Sunday action.

Medical teams have established a variety of support operations at the center of the camp.

“We have just about everything from medical to emotional wellness services to herbal medicines, a facility for mid-wife and women’s health and more,” said Dr. Hailey Wilson, who is of the Nez Perce Tribe, spent a week at the camp. “Right now the teams are preparing for winterization and getting the materials for a permanent dwelling.”

The medical team has placed an urgent call for wool clothing and zero-degree sleeping bags and other items to keep families from freezing this winter. Prior to Sunday’s action there had been a few ailments or minor injuries, and one birth in the last few months. As many as 200 people were reported injured in the action with law enforcement including one elder who suffered cardiac arrest on site.

“The unique thing about this camp is people are willing to help,” said Wilson. “If there is work to do, they just do it. If people have skills to offer, they are offering it. The only thing asked is that those who choose to stay here must respect the spiritual nature of the camp. It’s like a little hometown, only bigger than my hometown.”

The Rev. Buddy Monahan, pastor of the Westminster Presbyterian Church in Odessa, Texas relates closely to the group, coming from a region that is big on oil and gas.

“Being Native and also being a pastor, there is a strong sense of spirituality and community in the camps we’ve visited,” he said. “People are coming to the microphone and loudspeakers in need of a ride, a mechanic or carpenter and people are coming up to fill that need. This is what it should be like in the church.”

The Rev. Mark Koenig, coordinator for Leadership Development, Racial Justice and Network Support for the Presbyterian Mission Agency agrees, “One doesn’t necessarily have to go to seminary to serve the church, there are many ways to serve the church and people in need.”

The Synod of Lakes and Prairies has set up an account for donations to help the Standing Rock Sioux tribe’s efforts to stop the Dakota Access Pipeline. Checks can be sent to: