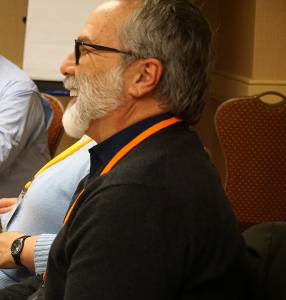 The Rev. Rick Behrens says when immigrants moved into the neighborhood “a beautiful thing happened.” It was a gift to the people remaining, and to the church, because now everybody wanted to live there. —Paul Seebeck

In response to a directive from the 220th General Assembly (2012), the offices of Immigration Issues and Theology and Worship of the Presbyterian Church (U.S.A) recently held a three-day immigration consultation in St. Petersburg, Fla., called “Being Church Together.”

The Rev. Charles Wiley, coordinator Theology and Worship at the PC(USA), says the ultimate purpose of the consultation is to develop worship and study resources around immigration—that support churches efforts at multicultural integration at the congregational level.

“We have to recognize that integration is a two way street,” says Teresa Waggener, coordinator of the PC(USA) Office of Immigration Issues. “Being church together moves from ‘welcoming the stranger’ to building community with people who are different from each other. For this consultation we called together people who are actually doing this work.”

Consultation participants (listed below) acknowledged one of the first steps of multicultural integration—that leads to a congregation planning, worshiping and taking action together as equal partners—is to acknowledge the things that separate us.

“For those of us who are strangers hearing ‘you need to welcome me’ makes me go ‘huh?’” says Marissa Galvan-Valle, associate for Presbyterian Mission Agency resources and relationships with Hispanic/Latino constituencies. “You’re calling me a stranger? The tricky part is recognizing we are now part of the reality of this country, part of its core.”

So Galvan-Valle asks, “How do we do ministry together, with everything we bring to the table, in the richness that God has created in us?”

The Rev. Rick Behrens of Grandview Park Presbyterian Church in Kansas City, Kan., began wrestling with that question in the mid-nineties. The neighborhood around the church was less than five percent Latino/Hispanic, but by 2005 it was 70 percent. At first, Behrens and Grandview ministered to kids. They didn’t really know how to interact with the adult population because they didn’t know their language.

But in 2002, one of the kids Grandview had ministered to—now a high schooler—started coming to church. He began working with Pastor Behrens and translating for the church’s new bilingual service. In 2003, an evangelist from the Presbyterian Church of Guatemala arrived at the church. Soon there was large contingent of immigrants from Central and South America attending the church, now representing more than 40 percent of the 70 worshippers. Shortly after the evangelist had come some of the Latina women came to Grandview’s all Anglo session meeting. They wanted to know, “What is this coffee hour thing you do?” says Behrens. 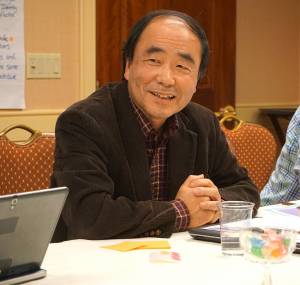 The Rev. Young Ghil Lee, pastor of Korean Church of Boston, enjoying a moment with colleagues at the Immigration Consultation “Being Church Together.” —Paul Seebeck

The session explained it was time for fellowship after church to get to know each other, and how on special days they’d have coffee cake before going to lunch at Applebee’s.

Hearing this, the ladies asked, “Can we try something next week?”

Behrens says the session couldn’t think of a reason why not and now Grandview has a meal after worship. Every week a family signs up to cook for the congregation.

“It’s such a huge financial commitment for them,” says Behrens. “But so important to them to sit together and share food. So many are away from their families.”

The Grandview congregation wouldn’t have it any other way now. Which is why the anti-immigration rhetoric dominating the current election season is so troubling to them. A woman who has become a leader in their congregation talked jokingly about what will happen if one of the outspokenly anti-immigrant candidates is elected president.

“We all know she’s sort of joking, but also making plans,” says Behrens. “It has ratcheted up my commitment to do this work. To not give up. To continue to speak.”

The “Being Church Together” immigration consultation continues through January 20—giving participants a chance to share stories of what they have learned about immigration ministry in their own context.

In addition to recognizing integration is a two way street, and encouraging—and moving beyond—a welcoming attitude, consultation members talked about:

Being Church Together is happening in conjunction with a Presbyterian Mission Agency Disciple Making Church Conference and a training event for 1001 New Worshiping Community coaches.