#GivingTuesday – Join the PC(USA) in responding to a world in need! Give now!
Make A Donation Click Here >
Home › Baltimore premiere of PDA’s ‘Flint’ shows water issue bigger than one city

Screening first outside of Flint area since world premiere; Baltimore home of congressman featured in documentary 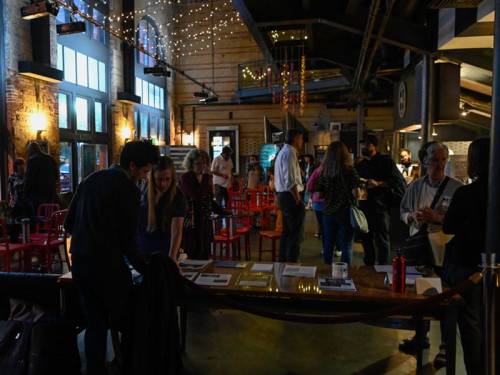 The Charles Theatre was the site of the Baltimore premiere of “Flint: The Poisoning of an American City” on Monday. (Photo by Rich Copley)

BALTIMORE — It’s a line that appears twice in the documentary, “Flint: The Poisoning of an American City.”

“What happened here is now happening in other places. It could happen in any city in the United States. It did happen in the city of Flint, Michigan.”

The passage comes from the cheery narration of a documentary about Flint in its glory days as a General Motors Factory town, when $40,000 to $60,000 jobs were easy to come by, there were lots of opportunities for people of color, and education was a cornerstone of a community filled with happy homeowners.

But in the documentary from Presbyterian Disaster Assistance’s Story Ministry, the line is also an ominous warning that what precipitated Flint’s water crisis, which made national headlines, could go wrong in communities across the country. Monday night was the film’s first chance to drive that message home.

“Flint” had its first public showing Monday following its world premiere in its namesake city and a weeklong engagement at other Michigan theaters. Monday’s screening was at Baltimore’s Charles Theatre, kicking off a string of major city premieres in coming weeks. 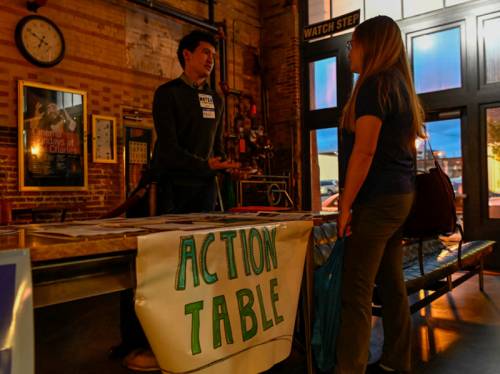 “Flint” screening campaign manger Myles Markham spoke to patrons at a table with information on how people can get involved in water issues in Baltimore at the Charles Theatre in Baltimore Monday. (Photo by Rich Copley)

There was a reason to start in Baltimore.

Before Monday night’s showing at the Charm City arthouse, director David Barnhart told the audience how he and producer and editor Scott Lansing were just about to wrap production of the movie when someone in Flint told them they needed to check out the House Committee on Oversight and Reform hearings on the Flint water crisis.

In those hearings, U.S. Rep. Elijah Cummings, D-Maryland, whose district includes Baltimore, emerged as a fiery interrogator of officials who were in charge as the Flint water crisis unfolded. In one sequence included in the film, Cummings, who now chairs the committee, comes unglued asking Keith Creagh, then director of the Michigan Department of Environmental Quality, if Flint residents were being required to pay bills for water they could not drink or wash with.

“Congressman Elijah Cummings was really trying to get at the truth,” Barnhart said of the Maryland representative’s role in the hearings.

Cummings was slated to co-host Monday night’s Baltimore screening but, according to Barnhart, he was unable to attend due to a medical procedure. 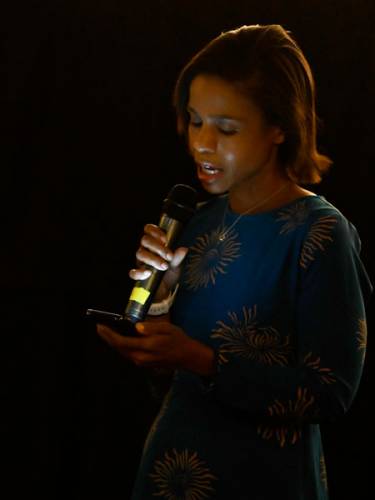 Britteny Jenkins, staff director of the Subcommittee on Environment at House Committee on Oversight and Reform, read a statement from U.S. Rep. Elijah Cummings, D-Maryland, before a screening of “Flint: The Poisoning of an American City” at the Charles Theatre in Baltimore on Monday. (Photo by Rich Copley)

The congressman was represented by Counsel Britteny Jenkins, staff director of the Subcommittee on Environment at House Committee on Oversight and Reform, who delivered a statement from Cummings.

“Films like the one you are going to see tonight are so important because they won’t let people forget what is still happening in Flint,” Jenkins read. “Films like this one keep Flint’s story alive and underscore that what happened in Flint isn’t an isolated tragedy. It’s happening all over our country to people who don’t have the influence and the political power to fight back.

“But we will fight back, and we will not stop until every single American’s right to clean drinking water is safe and secure.”

That’s a message that Barnhart and Lansing are trying to emphasize, taking the film around the country before it has its video-on-demand premiere Nov. 5. Following Monday’s showing, “Flint” is scheduled for premieres in in Atlanta (Oct. 10), Los Angeles (Oct. 12) and New York (Oct. 16), with other screenings in the works.

Like Baltimore on Monday, the subsequent screenings will feature local panels made up of experts in the local water situations. 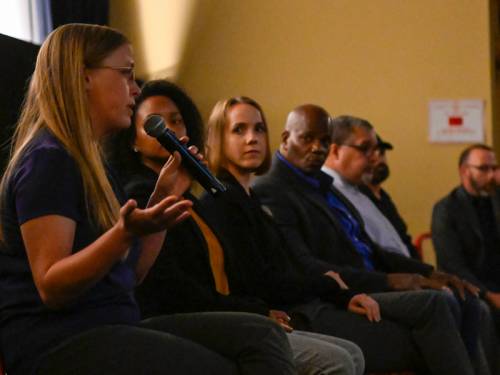 Jennifer Kunze, Maryland Program Manager for Clean Water Action, spoke during a panel discussion following a screening of “Flint: The Poisoning of an American City” at the Charles Theatre in Baltimore Monday. (Photo by Rich Copley)

Mary Grant, Public Water for All campaign director for Food & Water Action, said that her national group was aware of the Flint water crisis, a multi-pronged problem highlighted by high levels of lead in the city’s water due to aging pipes and pollution, before it made national headlines. But she said its high profile put a spotlight on water issues and that the film will help keep attention on water issues.

“I hope it will energize people to see that clean water is a human right,” she said before the screening. 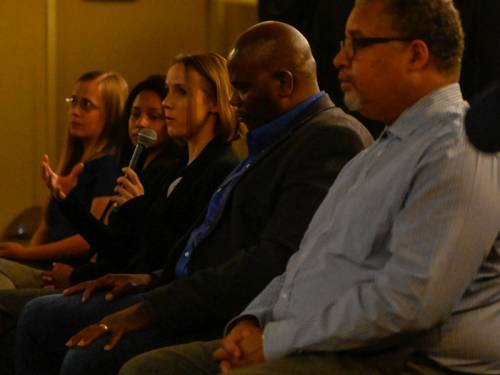 Mary Grant, Public Water for All campaign director for Food & Water Action, spoke during a panel discussion following a screening of “Flint: The Poisoning of an American City” at the Charles Theatre in Baltimore Monday. (Photo by Rich Copley)

Joining Grant and Kunze in the post-show panel discussion were Mariah Davis, Field Director of Choose Clean Water Coalition; Sean Stinnett of the  West Arlington Improvement Association; and the Rev. Greg Timmons of Calvary United Methodist Church in Flint, who helped keep a Flint perspective in the discussion of Baltimore issues.

Timmons encouraged the Baltimore advocates to do things such as lobby for air monitors in houses after hearing about regular sewage backups of 12-20 inches in basements, and the role of churches in advocating for people with water issues.

“It’s important and valuable for communities of faith to raise their voices and highlight issues of justice,” Kunze said of “Flint” coming from the Presbyterian Church (U.S.A.) 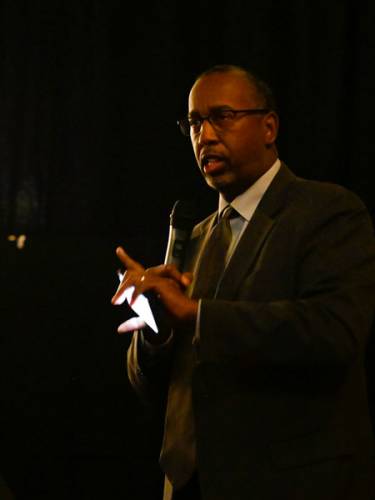 The Rev. Jimmie Hawkins, director of the Presbyterian Church (U.S.A.) Office of Public Witness in Washington, gave closing remarks following a screening of “Flint: The Poisoning of an American City” at the Charles Theatre in Baltimore Monday. (Photo by Rich Copley)

The Rev. Jimmie Hawkins of the PC(USA)’s  Office of Public Witness in Washington  delivered closing remarks, saying, “We’ve got to define water as a right. It is a right for every person to have fresh drinking water. If you are person of faith … find out what your denomination is doing and ways to partner with them as we continue to work together.”

For Barnhart and Lansing, the evening did exactly what they wanted in terms of bringing the film to different communities so they could look at it through their own lenses and experiences. Barnhart also said he hopes to raise awareness as even in his home base of Atlanta, discussions around Thursday’s premiere have brought up area issues he was not aware of.

“It’s exciting to see the film used as a starting point for conversation around local water issues,” Lansing said. “It’s interesting to hear the different issues. There are parallels to what happened in Flint” but are localized problems, he said.