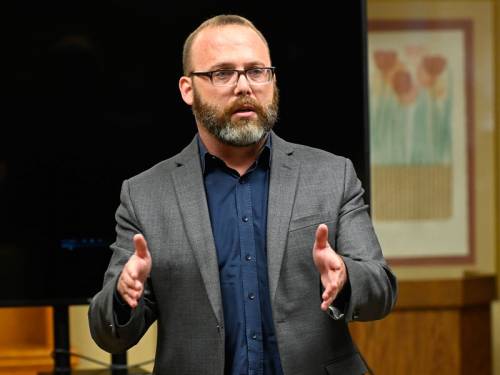 “This is new ground for the church,” director David Barnhart said on Tuesday.

The documentary shows gun violence from the perspective of victims, survivors, and their loved ones. The film explores efforts to combat the problem from protests to organizations such as The Coalition to Stop Gun Violence to university-based research programs.

The episodes of gun violence portrayed vary from mass shootings such as the April 2007 shooting at Virginia Tech to individual attacks in urban and suburban areas. The impact ranges from a mother who lost her only daughter when she was a teenager to the effects of media coverage of gun violence across culture. At one point the film looks at a neighborhood where children don’t play outside because they and their families are afraid of gun violence.

“Trigger” also delivers some eye-popping statistics such as less than one percent of the gun dealers in the country account for 60% of the guns used in crimes. It suggests that a lot of gun violence could be stopped with changes to laws that make it easy for criminals to get guns.

“These stories and voices need to be heard and we have an incredible opportunity with this platform on Amazon Prime,” Barnhart says. “’Trigger’ reveals the humanity that is at the heart of this epidemic of gun violence and that is so needed right now.”

The documentary was initially seen as broadcasts on NBC affiliates around the country in 2012 while “Trigger” was still in production. The final version came out in 2017 and was shown at festivals and venues such as the Martin Luther King Jr. D.R.E.A.M Film Series.

“Flint: The Poisoning of an American City,” the latest project from Barnhart and Story Productions, will have its public premiere at the Capitol Theatre in Flint, Michigan, at 7:30 p.m. on Sept. 12. Tickets are not on sale yet, but Presbyterian News Service will let you know as soon as they are available.