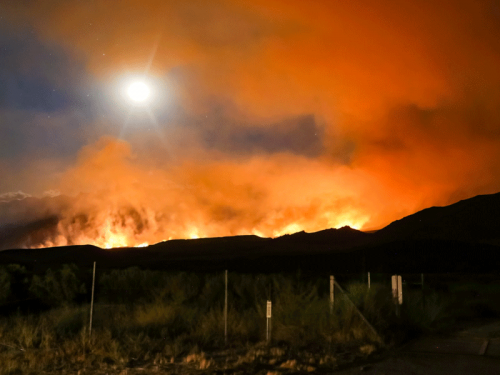 Wildfire burns in the Sierra Nevada Mountains of California. (Photo by Ross Stone via Unsplash)

LEXINGTON, Kentucky — On Tuesday, The New York Times ran the headline “Two Americas: One Parched, One Soaked” over a map that showed a marked increase in rainfall over the eastern United States in the last 30 years, and decreasing precipitation over the West during the same period.

The Rev. Jim Kirk, Presbyterian Disaster Assistance’s (PDA) Associate for National Disaster Response, doesn’t need a map to see what is happening. He’s seen it through disaster responses that consistently involve addressing wildfires in the West and rain events from hurricanes to flash floods in the East.

The latest example of that came last weekend as more than 17 inches of rain fell in less than 24 hours in Western Middle Tennessee, creating flash floods that killed more than 20 people and demolished homes, buildings and roads. That came on the heels of devastating flooding in Western North Carolina last week when the remnants of Tropical Storm Fred swept through the region, killing at least  five people.

Meanwhile, in California, residents are facing some of the largest wildfires in the state’s history as fire season becomes longer with more widespread and sustained blazes. News of a new fire in Southern California Wednesday stoked concerns the fire threat may be moving south.

Kirk said the disaster committee of North Central California Presbytery is actively involved in addressing the situation. A post on the Presbytery Facebook page reads: “Pastor Laura Barnes of the Federated Church in Placerville is working with the Red Cross to identify ways they can offer meaningful aid to those impacted by the Caldor fire. Thanks be to God for these and many other partnerships that are bringing much-needed help as we learn how to love one another through highly complex, difficult times. God’s love is not in a drought, it is like (a) mighty stream!”

The post noted that gifts to Presbyterian Disaster Assistance have helped enable the presbytery’s response to the fires.

Presbyteries and churches in Tennessee and North Carolina are also responding to the flooding in those states, with PDA making an initial assistance grant to Middle Tennessee Presbytery. Kirk said that at this time there has not been an assistance request from Western North Carolina Presbytery. He also noted PDA has been in touch with presbyteries in the Northeastern United States impacted by Hurricane Henri last weekend, but there have been no requests for assistance at this time.

Kirk says the current crises and this year have been indicative of the influence Climate Change is having on weather patterns, creating events with greater, and particularly in the case of flash flooding, unexpected impact. Fortunately, Presbyterians continue to respond in kind.

“In the midst of these very impactful events, local Presbyterians are stepping up to the plate and offering hope, compassion, reaching out with the hands of Christ,” Kirk said. “We’re grateful that through the generosity of Presbyterian siblings across the country, the denomination, through PDA, can support the response.”