LOUISVILLE — The Presbyterian Hunger Program is rallying support for a march taking place in Florida this weekend to urge the Wendy’s restaurant chain to join a program to help protect farmworkers.

The Coalition of Immokalee Workers, a partner of the Presbyterian Church (U.S.A.), is holding the march on Saturday to get the fast-food giant to join the Fair Food Program, a worker-led monitoring and enforcement program that was started by CIW to help prevent human rights abuses against farmworkers.

“We’re talking about a population that is mostly foreign born and learning English, often as a second or third language, (and) one of the most discriminated against and exploited sectors in the whole country,” said Andrew Kang Bartlett, a PHP staffer supporting the march. “Yet, they’ve been able to achieve amazing things because of their brilliant strategizing, their gorgeous artwork and energized rallies.”

Several Wendy’s competitors, including McDonald’s and Taco Bell, have joined the Fair Food Program, which is considered to be the gold standard for protecting farmworkers against forced labor, sexual violence and other human rights abuses in food retailer supply chains, according to the coalition. 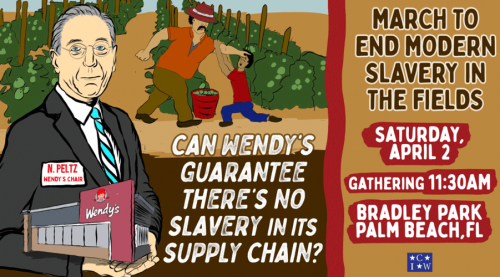 The Coalition of Immokalee Workers is holding a march on Saturday to help improve conditions for farmworkers.

“It is appalling that Wendy’s has refused to commit the fast-food chain to the Fair Food Program’s best-in-class protections for nearly a decade, and especially now, given the horrific rise of modern slavery cases in North American agriculture,” said Nely Rodriguez, senior staff member of the Coalition of Immokalee Workers, in a news release. “On April 2, we’re marching with a simple question for Wendy’s Board Chair Nelson Peltz: Can Wendy’s guarantee there is no slavery in it is supply chain?”

In recent memory, federal authorities have uncovered multiple forced labor operations on farms that aren’t in the Fair Food Program, according to the coalition. The U.S. Justice Department announced in November the indictment of 24 defendants on felony charges, stemming from an investigation into human smuggling and labor trafficking and conditions that included subjecting illegally imported workers to “brutal conditions” on farms in south Georgia, according to federal authorities.

The plight of farmworkers in general was discussed earlier this week in “What You Can Do to Support Farm Workers.” It was hosted by an organization called the National Farm Worker Ministry (NFWM), which has been working in solidarity with farmworkers for 50 years (PHP serves on its board).

“Farmworkers themselves, even though they harvest the food that feeds the rest of us, are often food insecure themselves,” said speaker Jeannie Economos of the Farmworker Association of Florida, a longtime partner of PHP. “They have some of the lowest wages of any occupation. They face discrimination because of race. In Florida our farm worker population (is) largely Hispanic, from Guatemala, El Salvador, Honduras, and Mexico. But also we have farmworkers from Haiti, and we still have some African American farmworkers. They face intimidation, often because of their race or because of their immigration status. They’re exposed to toxic pesticides and they are victims of a policy of agricultural exceptionalism, which means that they are excluded from many labor laws that protect all other workers.” 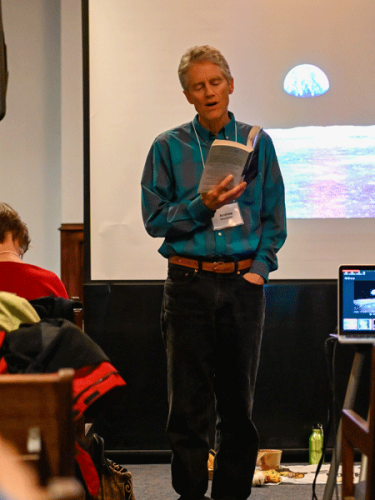 Kang Bartlett, Associate for National Hunger Concerns for PHP, will be going to Florida to support the farmworkers by taking part in the march. He urges others in the church to do so as well.

“Presbyterians care about justice and fairness, and this is such a clear case where workers have been abused, underpaid (and) endangered for decades. This Fair Food Program has a proven track record of improving conditions and providing a more livable wage,” Kang Bartlett said.

For those who can’t make it to the march, there are other ways to support the cause, Kang Bartlett said. Examples include helping to cover expenses, such as the cost of buses to transport people to the march; organizing a small rally in your own area; or delivering a letter to a local Wendy’s manager to keep pushing for change and show your solidarity with the farmworkers.

“They don’t give up, so we shouldn’t give up either,” he said.

The Presbyterian Hunger Program is one of the Compassion, Peace & Justice ministries of the Presbyterian Mission Agency. Its work is made possible by your gifts to One Great Hour of Sharing.