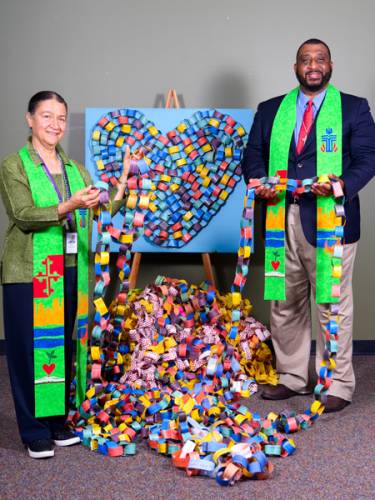 The Co-Moderators of the 224th General Assembly, Ruling Elder Elona Street-Stewart and the Rev. Gregory Bentley, are pictured with some of the Links of Love that awaited their arrival last week at the Presbyterian Center in Louisville, Kentucky. (Photo by Rich Copley)

LOUISVILLE — When General Assembly Co-Moderators Ruling Elder Elona Street-Stewart and the Rev. Gregory Bentley were elected on Saturday, June 20, they were immediately given the option of moderating the first-ever, fully-online 224th General Assembly (2020) of the Presbyterian Church (U.S.A.) from their respective homes in the upper Midwest and the Southeast.

They respectfully took a pass.

Had they chosen to moderate the historic gathering from home, not only would they have missed the opportunity to interact — always at a safe, six-foot distance — with members of the technical crew and national staff who were scattered across several conference rooms at the Presbyterian Center in Louisville, Kentucky, but also the colorful display that awaited them.

Prior to their arrival in Louisville last Wednesday, Presbyterian Giving Catalog staff members saw to it that a length of paper chain in the shape of a heart, representing “Links of Love,” found its way into their open hands, assuring them of a grateful denomination’s prayers, love and support. 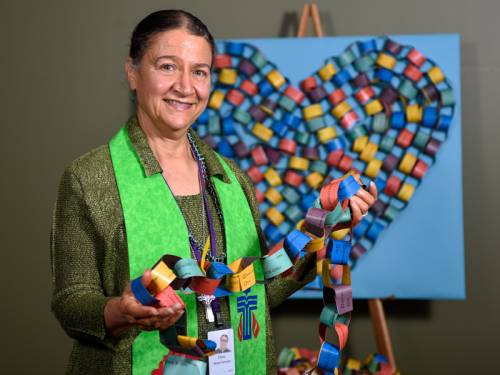 “Links of Love,” a simple activity in which individuals, congregations and mid councils were invited to create paper chain links for every gift they made through the Presbyterian Giving Catalog, was originally intended to be displayed in Baltimore, but the online assembly rendered it almost entirely virtual. Only the modest paper heart and the mound of links beneath it —representing hundreds of feet of Presbyterian generosity across the denomination, country and globe — are currently on physical display.

“As we look at these ‘Links of Love,’ we understand that a little can mean a lot,” said Street-Stewart. “It builds our understanding of being generous.” 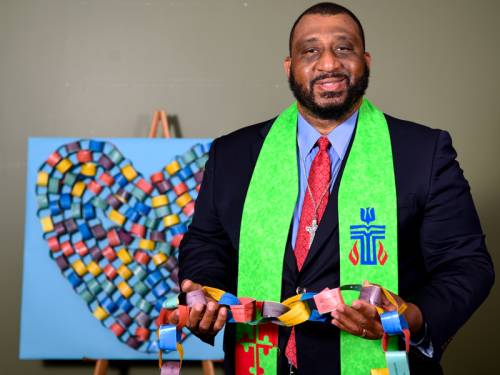 The Rev. Gregory Bentley is Co-Moderator of the 224th General Assembly. (Photo by Rich Copley)

Additional shipments continue to be received at the Presbyterian Center toward the initiative’s ambitious goal of building a paper chain that will encircle the entire world — a world that will be positively impacted by the gifts that these paper links lovingly represent, such as aid for refugees, access to clean water and helping to end hunger.

“Love is not just an emotion, it’s devotion,” said Bentley. “It’s not just about how we feel, but how we connect as a body of believers.”

Participation is easy … Link up today and be included — click here.