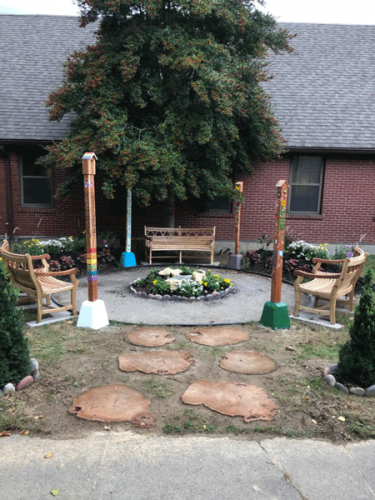 LOUISVILLE — Asked by Special Offerings to develop a sermon marking the Peace & Global Witness Offering that many churches collect on World Communion Sunday on Oct. 3, the Rev. Marissa Galván-Valle said her first reaction was, “Oh my Lord, I don’t know how I will do this.”

Then Galván-Valle, the Spanish-language editor for the Presbyterian Publishing Corporation and pastor of Beechmont Presbyterian Church in Louisville, thought for a moment. As a clergywoman and person of color leading a diverse congregation, “when asked to lift my voice I will try to make space for it,” Galván-Valle told Bryce Wiebe and Lauren Rogers Monday during the broadcast of Between Two Pulpits, Special Offerings’ weekly half-hour broadcast, which can be viewed here.

In addition, Beechmont had a project illustrative of the text selected for the sermon, 2 Thess. 3:16-18, which opens with this sentence: “Now may the Lord of peace himself give you peace at all times in all ways.”

As the pandemic began to take hold in the spring of 2020, Beechmont was building a peace garden, which Galván-Valle notes in her sermon “was important for a church that had members and friends that came to this country fleeing from civil war, crossing borders to find a place where violence and economic hardship was not a prevalent part of life, and people facing economic challenges.”

“We wanted to make a place where people could sit down and be reminded of God’s gift of peace: a place that also came intimately related to justice and a holistic sense of well-being.”

Decades ago, Beechmont began its ministry as a white suburban congregation. Through working with refugee ministries and by opening its doors to all, it’s evolved into a congregation with members and friends from Central America, the Caribbean, Africa, South Korea, the Philippines, “and from Pittsburgh and Wisconsin and Michigan,” Galván-Valle told Wiebe and Rogers. “There is an acknowledgement that a lot of folks have come from places that aren’t peaceful.”

A person from Haiti “who has fought for justice and peace” is a central figure in the creation of the peace garden. “It’s a place of encounter for us,” Galván-Valle said. “It’s really a state of who we are and what we bring in all those experiences when we worship together or serve together.”

In serving such a diverse church, Galván-Valle said she’s learned “that everybody is a library. All our faiths, all the cultures we bring to the table are important in order to understand God’s Creation, God’s image, God’s desire to diversify, to create all these colors and experiences.”

“We are in a dominant culture, the U.S. culture. How do we create spaces so that everyone’s power can thrive and take shape? How do I give voice and a place to thrive, to be, so that you can be yourself? In church we talk a lot about family. It’s not blood ties — it’s the mere fact that God created all of us as siblings,” she said. “We want the leadership of the church to look as diverse as the church. We still aspire to become that, and we are learning to be creative and spontaneous.” 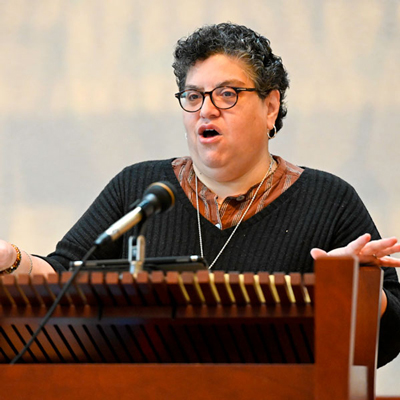 Galván-Valle used a video during worship this past Sunday on suicide prevention, part of the congregation’s participation in the 2021 Season of Peace. A few years ago the church worked on trauma healing for Beechmont folks from South Sudan, and now they’re doing that again for children from Honduras, who “experienced trauma coming here and then were thrown straight into [distance learning during the pandemic],” Galván-Valle said. “Peace can be aspired to, if not created, and we can give tools to people so they can be promoters of peace in their families and their communities.”

What’s your hope, Rogers asked Galván-Valle, for the future of the church?

As one who’s worked for the national Church for 16 years, “I hope we are the Church God wants us to be, and I mean that creative God I’ve been talking about,” Galván-Valle said. “We try to put things in uniformity and God is not like that. When we talk about eradicating racism or climate change, we honor the creativity and imagination of God. That’s my hope for the church, honoring the creative God that starts in Genesis and has victory in Revelation. I think we will get to that kingdom value we are striving for.”

Between Two Pulpits airs at 1 p.m. Eastern Time each Monday via Facebook Live. Find it here.