Share God’s love with our neighbors-in-need around the world through One Great Hour of Sharing.
Make A Donation Click Here >
Home › A small building in the Republic of Georgia with a large impact on interfaith dialogue

The Peace Cathedral will become a spiritual home for Abrahamic faiths 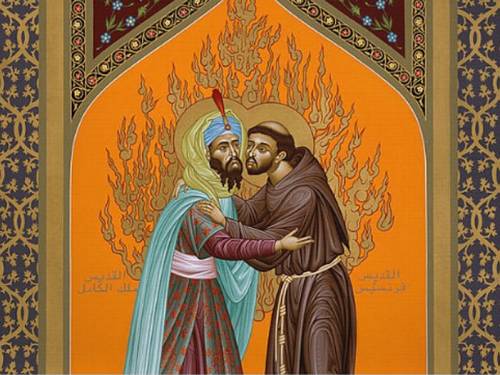 A depiction of St. Francis meeting the Sultan of Egypt during the 13th century. (Image courtesy of the Peace Cathedral)

LOUISVILLE — In the early 13th century, St. Francis of Assisi traveled to Egypt to meet with the Sultan so Francis could show the people there the way of salvation. What happened instead was a conversation about peace, interfaith dialogue and the necessity to join in service together regardless of religious differences.

That is just one of the historical inspirations for the Peace Cathedral in the Republic of Georgia to construct a mosque and a synagogue attached to the church building to create a spiritual home for Abrahamic faiths. Once the project is complete, the building will stand as a profound example of what the world should be.

Georgia is country at the intersection of Europe and Asia, a former Soviet republic. Georgians officially adopted Christianity in the early 4th century. 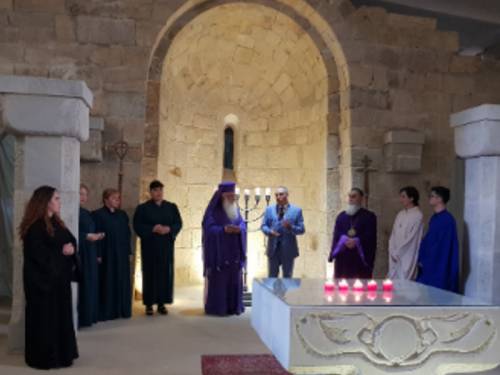 The Ambassador of Israel at the Peace Cathedral. (Photo by Natela Tochilashvili)

“The Peace Cathedral is a self-acknowledged small church from a small country doing big things, reaching out beyond the borders of Georgia and across faith traditions to help where help is needed,” said Ellen Smith, World Mission’s regional liaison for  Central and Eastern Europe.

She said the organization is exploring partnership opportunities with World Mission.

“Connecting our work with the Peace Cathedral in Tbilisi would be very important, both for its geographical location, its interfaith and peacemaking work, as well as the connections they make between the Middle East and Eastern Europe,” said Luciano Kovacs, World Mission’s coordinator for the Middle East and Europe. “As we affirm old partnerships and develop new ones, we are mindful of how interfaith solidarity and peace work are connected to PCUSA’s Matthew 25 foci.” 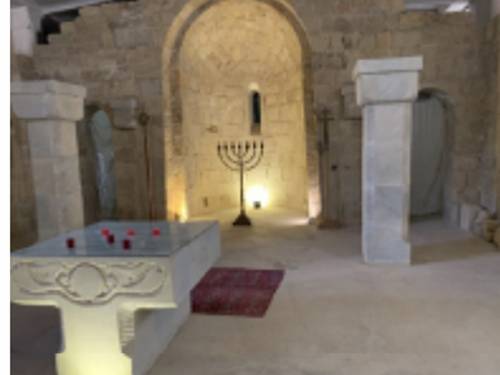 The Cathedral’s Muslim house of prayer will be called Masjid As-salam – مسجد السلام (Peace Mosque), and the Jewish home will be called Beit Kneset ha-shalom –בית כנסת השלום (Peace Synagogue). Although not physically large spaces, their impact on interfaith cooperation will be substantial.

In the course of its history, Peace Cathedral has repeatedly taken bold stands in support of oppressed minorities, even as the church has suffered periodic harassment from religious extremists. It has embraced gender equality, ordaining women to serve as deacons, ministers and bishops, and provided hospitality and safety to Muslim refugees during the Chechen-Russian war and to those who lost their homes and livelihoods when Russia invaded Georgia in 2008. 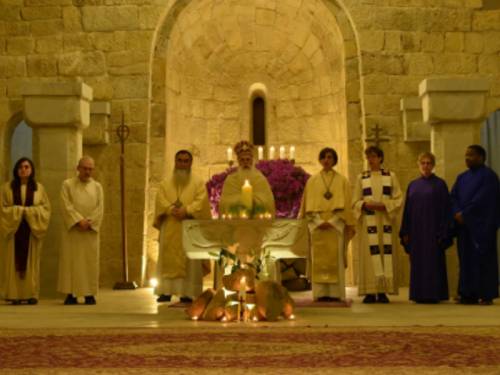 After completion of Peace Mosque and Peace Synagogue, the Cathedral will become an interfaith pilgrimage destination for people who are weary of sectarianism, tribalism and religious antagonism. Prayers for peace will be offered in Islamic, Jewish and Christian liturgical traditions. Peace meditation and liturgical traditions will be shared in respect and reverence and will be open to everyone.

The Peace Mosque is almost finished. Construction has been done in the tradition of ancient stone workmanship. The Peace Mosque repeats the features of the main nave of Peace Cathedral, where the apse is not completed. Neither has the main wall of Peace Mosque been completed. These features are intended as a statement that God’s work is never finished and should be continued from generation to generation. The estimated cost is $15,200.

The work on the concrete shell of the Synagogue is the priority for 2021. Portions of the building will be built in sandstone and green diabase stone from the mountains of Georgia. Some features will be reminiscent of some features of the Dura Europos Synagogue in Syria. The estimated cost of completion is $41,000.

This principle was created to encourage mutual fundraising among Muslims, Christians and Jews to encourage each other’s work and witness and the appreciation of diversity and celebration of the global heritage of religions. There is also an option to make a contribution to the overall project, which will be used to purchase literature and equipment for the library and to organize international and national interfaith seminars and lectures.

In the aftermath of the second Russo-Chechen war, Chechen refugees came to Georgia. The Peace Cathedral participated in relief work with the refugees. That encounter with Muslim refugees changed the Cathedral’s perspective on Muslim-Christian relations.

In its promotional materials, the Peace Cathedral refers to the Book of Esther, which includes a story of the genocide of the Jews targeted by the state power of Persia because they were “different” from others.

“Then Haman said to King Ahasuerus, “There is a certain people scattered and separated among the peoples in all the provinces of your kingdom; their laws are different from those of every other people, and they do not keep the king’s laws, so that it is not appropriate for the king to tolerate them.” (Esther 3:8). 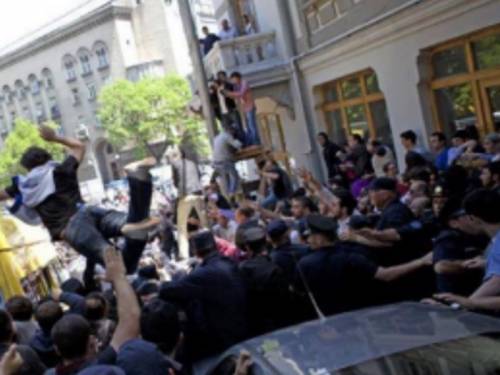 A mob attacks members of the LGBTQ community in Georgia on May 17th, 2013. (Contributed photo)

After 2010 Georgia saw unprecedented growth of the people in society who were different from the majority population. The groups particularly targeted were Muslims and members of the LGBTQ community. On May 17, 2013, a small group of LGBTQ people and their supporters were attacked by more than 20,000 people, including bishops, priests, deacons, monks, nuns, and laity.

“It is a tradition of Peace Cathedral to respond to these acts of ugly bigotry with acts of beauty and creativity,” said organizers. “Construction of sacred spaces for the people of ‘different’ religious traditions is one of the responses of Peace Cathedral to counter the intolerance and bigotry which was inspired and orchestrated by the majority Georgian Orthodox Church.”

For more information about the Peace Cathedral, contact ellen.smith@pcusa.org.