Alan and Ellen are periodically in the USA.
Email them to extend an invitation to visit your congregation or organization.

About Alan and Ellen Smith’s ministry

Al’s primary duties relate to the ministries of PC(USA) partners among minority groups in Russia. This includes the Roma people, formerly known as gypsies, who have been marginalized for generations. He also works with refugees from Africa and Asia who have come to Russia in recent years and who have no legal rights and face extreme discrimination.

Download: a bulletin insert that lifts up the Smiths’ work in Germany and Russia

Al and Ellen Smith and their ministry partners are committed to breaking down barriers that divide people. Ellen likes to tell of the reconciliation efforts of Father Vladimir Klimzo, an Orthodox priest who serves in the small Russian village of Davydovo.  Father Vladimir is involved with a ministry with special needs children and their families.  “These families so often feel like outcasts in a society that for 70 years institutionalized those with special needs,” Ellen says. “People are not used to seeing them and too often react unkindly.” In order to protect children from insults, the parents often isolate themselves and their children.  Father Vladimir wants to change that, so he is reaching out to children with cerebral palsy, blindness and deafness.

Ellen arranged for Father Vladimir and other Russians engaged in special needs ministries to visit programs in Germany that serve people with special needs.  She is also seeking specialists and other resources from the United States that will help them develop their model. Father Vladimir has a small farm that he hopes will someday provide employment for people with special needs. He already has acquired 35 head of cattle. “We ask for your prayers for this developing ministry; that their steps would find solid ground, guided by the Holy Spirit and that others might join them in the journey,” Ellen says.

In his outreach to minority peoples Al works with partners like Andrey Beskorovainiy, a Roma pastor in Russia, who strives to help Roma people experience full inclusion in the church and society. While visiting a Roma camp in Carpath-Ukraine, Al and Andrey saw how severe the Roma’s alienation can be. People were living in ramshackle housing made of homemade bricks and plywood. “How anyone survives a winter is a mystery,” Al says. “The camp is very crowded; men, women, children, and stray dogs wander everywhere, and few people are able to find gainful employment.” Al was heartened that a nearby Reformed congregation was tending to the physical and spiritual needs of the people in the camp. Andrey preached in the camp, and the Roma were gratified to hear a sermon delivered by a Roma minister. The Roma in Russia also face serious challenges, Al notes. “It’s pretty unusual for Roma to go to school through the 10th grade like most Russians do. They wind up as people with very limited job skills.”

When communism fell in the late 20th century, the freedom for Christians in Eastern Europe to practice their faith was greatly expanded. The Presbyterian Church (U.S.A.) has accepted the invitation of several of the region’s historic churches to accompany them in this new chapter of ministry. Expanded freedoms have helped Eastern Europe recover a rich and diverse history, but they have also brought to the forefront many ethnic and nationalistic tensions that were repressed when the region was dominated by the Soviet Union. Al and Ellen Smith and other mission co-workers are helping PC(USA) partner churches in the region in ministries that seek to move Eastern Europe beyond those historic tensions toward a more harmonious future.

About Al and Ellen Smith

For several years Al and Ellen’s ministry in Russia has included facilitating relationships between U.S. Presbyterian congregations and Russian congregations. This program of twinning congregations has strengthened congregations in both countries, they say. It also makes a positive statement about the gospel’s ability to overcome barriers.

“When we come together across so many boundaries, the unity we have in Christ is transformative,” Ellen says. “The witness we share with non-believers when Russian and American Christians work together as servants in camps, orphanages, outreach, drug rehabilitation, family ministries and other projects is powerful.”

Prior to entering mission service Al and Ellen were both secondary school teachers in North Carolina. Al practiced law before becoming a teacher. Both earned undergraduate degrees from Carleton College in Northfield, Minnesota, and Al holds a law degree from the University of Minnesota in Minneapolis.

Al and Ellen are both ordained to the ministries of ruling elder and deacon and are members of MacPherson Presbyterian Church in Fayetteville, North Carolina. They are accompanied in mission service by a teenage daughter, Emma. They also are the parents of two adult daughters, Allison and Margaret. 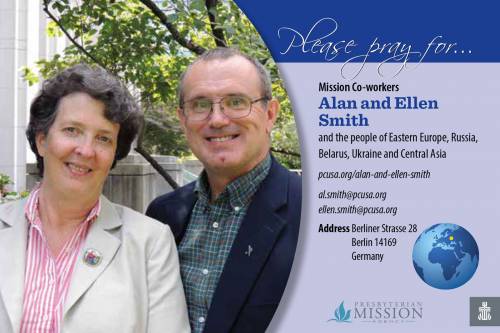 Use this card as you pray for mission co-workers Alan and Ellen Smith. This card includes a photo and overview of their work. In addition…

Give to the ministry of Alan and Ellen Smith