Christmas Joy Offering – Supporting our leaders: past, present and future.
Make A Donation Click Here >
Home › A Princeton Theological Seminary webinar tells a captivating story of how one inmate gained freedom and now serves his community

Billy Taing and the Rev. Diane Ujiiye of API Rise are guests of the Center for Asian American Christianity 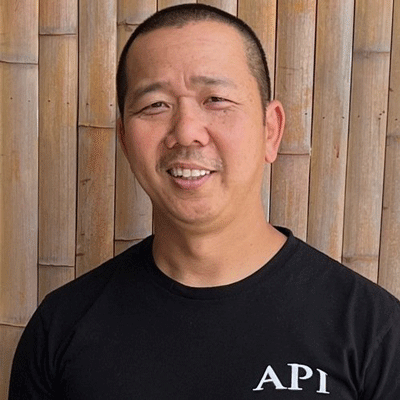 LOUISVILLE — It was Billy Taing’s candor that made for a memorable and moving webinar hosted last week by Princeton Theological Seminary’s Center for Asian American Christianity. Taing joined his fellow co-director with the organization API Rise, the Rev. Diane Ujiiye, for a discussion titled “Freedom? A Conversation About Incarceration and Being Asian in the U.S.” Dr. David Chao, director of the Center for Asian American Christianity, was the host. Listen to their conversation here.

Formerly incarcerated in the California state prison system for more than two decades for kidnapping and robbing people aboard a tour bus, Taing petitioned for and received a full and unconditional pardon. After leaving prison, he also left a union apprenticeship as an electrician to serve his siblings in the Asian American and Pacific Islander community in API Rise. Taing co-founded the Black and API Solidarity Group.

Taing was born in Cambodia in 1974, a year before the Khmer Rouge began one of the most brutal genocidal campaigns in human history. When he was about 18 months old, the Khmer Rouge “barged into our home, accused my father of speaking Chinese and beat him up in front of us. They dragged him away and we never saw him again,” Taing said.

He, his older brother and their mother were sent to a labor camp. By 1979, they’d made their way to the border with Thailand, where they were taken in by American soldiers. The next year the family made it to Atlanta, then San Diego and Monterey Park, California.

His brother joined a gang when he was 12. “I wanted to be embraced by people and naturally I gravitated there,” Taing said. “I started committing crimes and hanging out with people in that lifestyle. I felt a sense of belonging.”

At age 19, Taing laid plans to rob a tour bus going to Las Vegas. “My intention,” he said, “was not to harm anybody.” Police charged him with kidnapping and robbery, and Taing was incarcerated in the Los Angeles County Jail. Following his trial, the judge told Taing he was “showing mercy” by sentencing Taing to two life sentences.

When the doors closed at the maximum-security prison he was sent to, “there was a sense of despair. I thought, what am I going to do for the rest of my life?” Taing said. “During my incarceration, I caused my mom so much suffering and pain. She would take the bus all night to come visit me. … At 19, most kids are going off to college, and I was learning [to sharpen a toothbrush] to defend myself among grown men.”

Three years later, Taing was sent to a lower security prison that offered educational and other programs. A sociology course “opened my eyes to a world bigger than the one I grew up in,” he said. “I started to learn about the impact of my crimes. No one got hurt physically, but I traumatized people and robbed them of their emotional security. That realization allowed me to take a path of transformation, learning about the ripple effects of my actions.”

By the time Taing appeared before the parole commission, “I was deep into my transformation. I understood what led me to be that 19-year-old boy who committed the crime that day. Trauma plays a huge role in that. I had felt weak and abandoned, and the trauma has impacted me throughout my whole life.”

While Taing was found suitable for parole, he next had to face immigration officers because he’d never sought U.S. citizenship. He served more than four months in a detention facility, then gained his release. A support organization introduced him to API Rise, “where I saw guys who were formerly incarcerated and lawyers and students who are really supportive and didn’t care about my past. … In Asian communities, we carry burdens of guilt and shame, but in API Rise space it wasn’t like that.”

During the Trump administration he was again detained, this time for six months. “It was disheartening to witness. I said if I ever get out of this, I will do what I can to be more vocal about how inhumane the immigration system is,” Taing said. His lawyers prevented him from having to board an airplane three days before he was to be expelled from the country.

Taing received his pardon on Christmas Eve in 2018, “the best Christmas gift ever. It allowed me to stay with family, plan for my future and serve my community. I am fortunate to be here,” he said. “For me, this is where I belong. This is my home, my community. My passion is to help others, brothers and sisters who are struggling. … I still get nervous speaking in front of crowds. I still struggle, but I learn from all of you. Hopefully one day we can sit down and have a face-to-face discussion.”

During a question-and-answer session, Chao told Taing he was struck by how calm Taing was even while relating all the twists and turns he has endured. “I think that’s a real tribute to your inner resilience and resources,” Chao told Taing. “There is no way I could tell that story with the calmness you did.”

Taing said he owes his calm to meditation. “For a long time, they didn’t allow Buddhist monks into prisons,” Taing said, explaining that he learned he could meditate up to 30 minutes in a prison dorm setting “without worrying I would be attacked. I have found inner peace and inner freedom. My experience defines who I am today,” someone who’s “not cuffed by the mistakes I have made.” 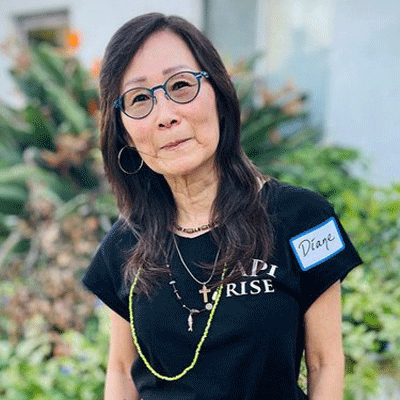 The Rev. Diane Ujiiye is co-director of API Rise.

“I share now with a mind to allow people to learn from my experience,” he said, “and I think that really helps me.”

In her closing prayer, Ujiiye invited everyone “to see a face. If you don’t know someone who’s doing time, see Billy’s face. As you reflect on those faces, reflect on the face of Christ.”

Her prayer included these petitions of the Almighty: “Instill in us a courage the overcomes fear. We ask for your mighty intervention as we continue to fight systemic racism and poverty, that we will find ways to stand in the gap and speak boldly, even if we’re the only voice in the room.”

Chao offered these words of prayer: “Thank you for brother Billy and the peace you have given him through meditation. Thank you for his courage. We pray we will have a chance to sit face-to-face and visit with one another. Thank you for Diane’s ability to speak truth and shine a light on stories that aren’t known. We pray that people of faith will be awoken.”