by Presbytery of Milwaukee | Special to Presbyterian News Service 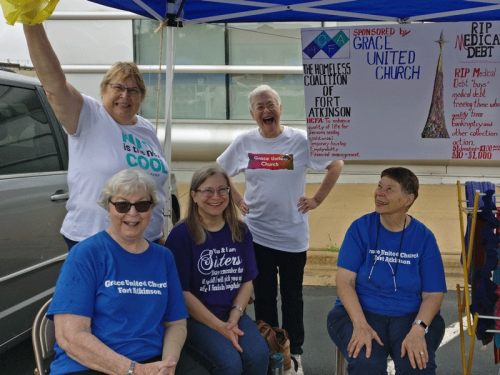 LOUISVILLE — Grace United Church of Fort Atkinson, Wisconsin, a merged congregation of the Presbyterian Church (U.S.A.) and the United Church of Christ, recently completed a fundraising project to nearly triple a gift of $2,000, to be used with the Matthew 25 invitation’s foci in mind: alleviating hunger and poverty, confronting racism, advocating for criminal justice reform and addressing other social justice needs.

Along the way, Grace members and friends learned a retelling of another parable found in Matthew 25, Jesus’ Parable of the Talents.

Last fall, the Presbytery of Milwaukee received an anonymous gift of $100,000, with instructions to distribute $2,000 to each member congregation, allowing each to use the funds in any way they saw fit, as long as the use met the conditions of Matthew 25: 37-40:

The logo for the Matthew 25 Invitation represents unity and equality. The three interlocking figures represent the equality of all people without gender or race bias.

The congregation of Grace United Church took up the challenge, selecting the Homeless Coalition of Fort Atkinson and RIP Medical Debt to receive the funds. The congregation went one step further by also adopting Jesus’ teaching in the Parable of the Talents, in which two of three slaves double their master’s money. The members and friends of Grace United Church believed they could at least double the $2,000 gift to expand the ministry of the funds received.

Beginning in Lent and ending on Labor Day, members of the congregation sold homemade baked goods, handcrafted items, collectibles, and other items at church and at the Fort Atkinson Farmers Market. In addition, they collected donations, more than doubling — and almost tripling — the original $2,000 seed money from the presbytery, bringing the total funds to $5,864.

The congregation’s pastor, the Rev. Delisa Buckingham-Taylor, who has since moved to Ohio to be with her husband, who’s also a pastor, said, “Grace United Church has a strong commitment to relieving suffering and offering God’s love in tangible and practical ways. Members and friends at Grace Church like to say that they ‘put arms and legs on God’s love.’  The Matthew 25 Project strengthened our commitment to serve Christ through ‘the least of these,’ and help move this world closer to the fulfillment of God’s reign of justice, peace and love for all.”

The Homeless Coalition of Fort Atkinson will use the funds to purchase a transitional home for families experiencing homelessness who need a safe temporary home while addressing issues related to their homelessness. Learn more about the Coalition’s transitional housing program here.