Presbyterians show their support as impact of flooding is felt 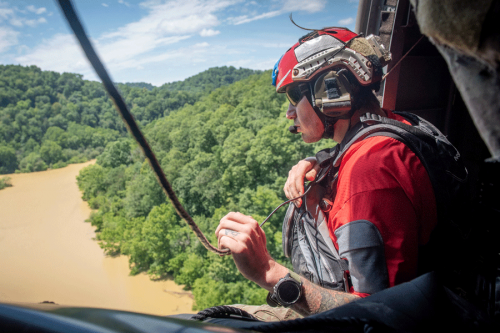 LOUISVILLE — Days and weeks after summer flooding ravaged various presbyteries this summer, the extent of the damage continues to be assessed. But the known effects have been significant, from displacing school children and pastors to damaging church basements and parishioners’ homes.

At least six churches in the St. Louis area have been affected to varying degrees by what’s been called a 100-year flood, said the Rev. Liz Rolf Kanerva, associate presbytery leader in the Presbytery of Giddings-Lovejoy.

“It’s really been a mixed bag of destruction,” she said.

“We have $100,000 worth of damage in the portion of our building where we have our school,” King said. “It’s a huge financial challenge to consider where that money will come from when it’s not built into the budget. And the second thing is that any repairs that need to happen will not be completed in time for the school to open, so we’re going to need to move where the classrooms traditionally are.”

The church is fortunate enough to have Sunday school rooms to accommodate the kids, “but it will mean moving all of the equipment and sort of repurposing those rooms” and figuring out how to share them, he said. “It will be a lot of effort for our teachers to figure all that out.” 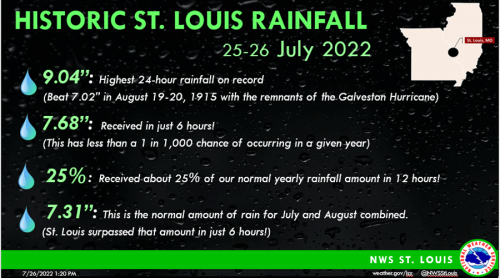 Missouri is one of three areas in which Presbyterian Disaster Assistance has been in contact with church leaders to offer support recently because of destructive and sometimes deadly flooding. The others are eastern Kentucky and western Virginia.

“Because of the generous support of the denomination, PDA has been able to consider grants in all three presbyteries and deploy national response team members to two of them,” said the Rev. Jim Kirk, Associate for National Disaster Response for PDA.

The Rev. Philip Lotspeich, general presbyter in the Presbytery of Transylvania, spoke of Presbyterian generosity in the wake of historic flooding in eastern Kentucky. (Read about a recent visit to the area here. The account was written by the Rev. Jerry L. Utt, II, Transylvania’s stated clerk.)

“I’m getting calls from presbyteries and churches and people from around the country wanting to help, wanting to express their concern and their prayers, and so it’s been really wonderful to see the larger church get involved and show how much they care about their brothers and sisters in eastern Kentucky,” Lotspeich said. “We’re trying to make sure they know how much people care about them, so when we go down there, we’re carrying all those connections and concerns and prayers with us.”

“We were fortunate that the flooding was mostly confined to the basement of those buildings,” he said. Buckhorn’s “sanctuary sits up fairly high,” but there’s an outbuilding that’s used for multiple purposes, including a kitchen and fellowship hall, and “we’re going to have to work on that.”

Additional concerns may arise. “Part of the challenge is we’re not even really into the assessment phase yet,” Lotspeich said. Residents and volunteers are still “trying to clean up and figure out what’s wrong. At Buckhorn, as of earlier this week, “they didn’t have electricity, so we don’t know what’s working (or) what kind of electrical damage there’s been,” Lotspeich said.

Another issue is that the manse is not livable right now, so co-pastors Tom and Gayle Burns will be moved to a location with electricity, air-conditioning and Wi-Fi, Lotspeich said. 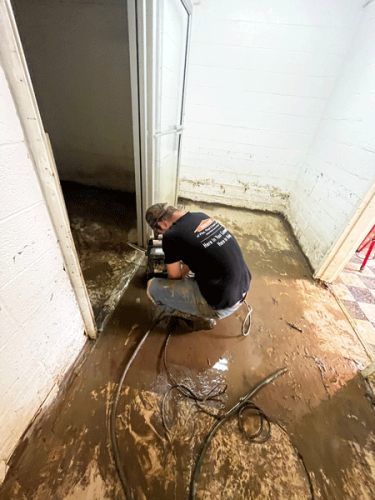 In the Whitesburg church, there were offices and other things, such as classrooms, in the basement, so they had to discard a lot of things because “the water was pretty nasty,” he said.

Also, a number of parishioners have been impacted and a couple of houses destroyed, and “we’re still trying to figure out exactly who all was impacted and help them take care of their parishioners as well,” he said.

Members of PDA’s National Response Team visited Virginia about 10 days ago to get a feel for flood damage there and provide support. Buchanan First Presbyterian Church in Gundy, which is located near a creek, sustained damage.

“They had about four feet of water and mud and muck and debris in their basement and then all throughout their parking lot as well,” said the Rev. Ann Elyse Hicks, presbytery leader and stated clerk in Abingdon Presbytery. But “they do believe as a whole the church is salvageable. … They are doing pretty well, all things considered.”

Presbyterian Disaster Assistance is one of the Compassion, Peace and Justice ministries of the Presbyterian Mission Agency. To support PDA’s response to the recent flooding and future natural disasters, make gifts to DR000191.