Christmas Joy Offering – Supporting our leaders: past, present and future.
Make A Donation Click Here >
Home › A journey toward hope

One Great Hour of Sharing gifts bring the promise of life — and life abundant — to the U.S.-Mexico border 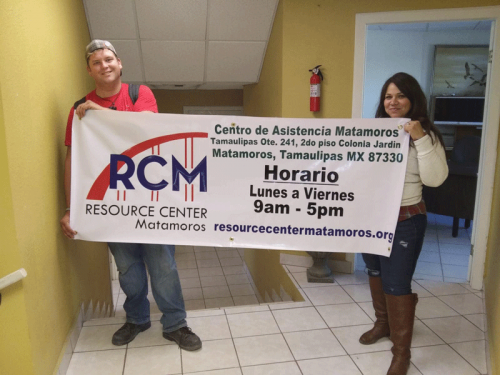 LOUISVILLE — In an increasingly interconnected world, never has hope seemed so close.

And yet, for Paola M., so very far away.

As if coping with the pandemic wasn’t hardship enough for the native Venezuelan, last year brought her and her family even more devastating news. Her father was diagnosed with a rare type of stomach cancer, for which a high-risk surgery — followed by chemotherapy and radiation — was indicated.

“This news really brought us down for a moment because we didn’t have the necessary financial resources,” she said, “plus which the socio-political situation in Venezuela didn’t allow us to access public health institutions for my father’s treatment. So, we had to turn to the internet to find other humanitarian agencies and institutions who could help.”

Fortunately, Paola’s search led her not just to any list of names but straight to the name that made all the difference, Gabriela Zavala.

“Within a few minutes, I was able to contact Gaby [Zavala] and explain to her the situation we were going through,” Paola said. “She guided me by giving me some options, among them the option of immigrating to the United States, a country of great opportunity where I knew they could perform my father’s medical treatment.”

Zavala, who is both founder and president of the Asylum Seeker Network of Support, is also director of its Resource Center Matamoros, a grassroots effort that has provided direct humanitarian aid to thousands of asylum seekers in Matamoros, Tamaulipas, Mexico, since 2019.

The seemingly tireless Zavala brings her passion on behalf of the marginalized along with her years of direct, hands-on experience advocating for the vulnerable to the critical work she does every day at the border. 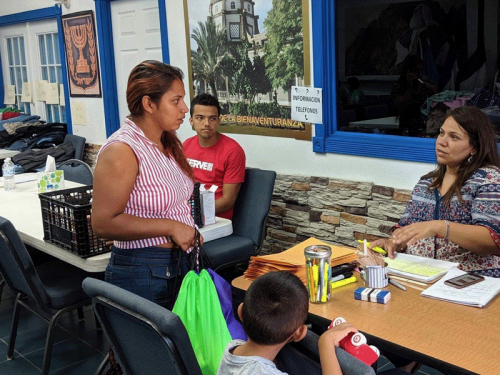 Although not formally educated as a social worker, Zavala and her team — many of whom were asylum seekers and refugees themselves — serve as caseworkers for families like Paola’s, providing them with information and access to legal, medical and social support services through such international organizations as HIAS. Originally founded as the Hebrew Immigrant Aid Society in 1881 to assist Jews fleeing pogroms in Russia and Eastern Europe, HIAS, according to the mission statement on its website, now welcomes and serves all who have fled persecution.

In addition, the Center assists families with shelter space, food and transportation should their application for asylum in the U.S. be approved.

“There is a lot of personal experience that I put into training our staff, a lot of skill sets that I try to pass along to them,” said Zavala, who earned her bachelor’s degree in biology and is currently pursuing a master’s in public administration. “I’ve worked in nonprofits since I was 19 years old, so I have that experience basically on the job.”

It was experience that served her well in advising Paola’s family on how to apply for a humanitarian visa. And although their eventual decision to seek entry into the U.S. was by no means an easy one, in the end Paola saw it as their only possible choice. It entailed tremendous sacrifice, loss and struggle, including family members first having to cross the Venezuela-Colombia border to make their way to Mexico, since no international flights depart from Venezuela.

“Because my father wanted to live,” she said, “we were willing to do whatever was necessary.”

Today, in part because of a generous grant to Resource Center Matamoros from Presbyterian Disaster Assistance (PDA) through One Great Hour of Sharing, Paola, her father Raul M. and their extended family are, in her own words, “happy and fulfilling a dream, improving our quality of life and giving my father many more years of life.”

In many ways, Paola’s story is unusual in that her family’s crisis was resolved promptly and successfully while most of the people in Matamoros face long waits before gaining entry into the U.S. More often, even with the help of Resource Center Matamoros and other organizations, most are turned back.

“It’s the ultimate fulfillment when you see a family like Paola’s come through and we’re able to process their application within a couple of days,” said Zavala, who regularly goes above and beyond to meet people’s immediate needs and help all whom she can.

Making hopeful outcomes possible has been the goal of One Great Hour of Sharing for over 75 years.

Founded in 1946 by Episcopal Bishop Henry Knox Sherrill, the Offering has a storied history as an ecumenical endeavor. Although many aspects of the Offering and its participants have changed since its founding, its original purpose of helping neighbors in need around the world remains the same, giving the PC(USA) a tangible way to share God’s love since Presbyterians first joined the effort in 1947.

“Interestingly enough, One Great Hour of Sharing was started in response to refugees coming out of Europe,” said Susan Krehbiel, PDA’s associate for Refugees and Asylum, “and although it’s used for other kinds of relief nowadays — hunger and other needs — it really was birthed as a way for different churches to work together in responding to the refugee crises of the 1940s.”

Today, the need for churches to work together in support of partners such as Resource Center Matamoros is greater than ever as the count of displaced people, refugees and asylum seekers swells across the globe, surpassing even post World War II numbers.

The resonance of the PC(USA)’s Matthew 25 invitation with this dire, worldwide, humanitarian crisis — perhaps hitting U.S. Presbyterians closest to home at the Mexico border — is not lost on Krehbiel.

“The Matthew 25:31–46 passage that lifts up the many ways that we serve Christ is just one of over 90 scriptural references to welcoming the stranger in the Bible,” Krehbiel said. “The Resource Center Matamoros lives out this understanding of the Gospel in what it does day in and day out. It is the very core of their mission to welcome the stranger, feed the hungry, clothe the naked and provide human connection to those who have lost so much. And, more often than not, they are focused on the most vulnerable among the vulnerable — pregnant women, people with medical issues and victims of violence. The PDA grant made possible through One Great Hour of Sharing, Matamoros, in effect, becomes a part of the PC(USA)’s outreach ministry.”

Krehbiel believes that the situation at the U.S.-Mexico border demands the PC(USA)’s urgent attention in the name of Matthew 25.

“The reasons that people stay on the border — some are coming out of kidnapping or extortion attempts — puts the already vulnerable at even higher risk,” she said.

Zavala agrees that the end goal for all nongovernmental organizations doing humanitarian work with refugees is to see them granted access to asylum by gaining entry into the U.S.

“This kind of work is different for us,” Zavala said, referring to her organization’s previous oversight of the former Matamoros Refugee Camp, which was closed as a top priority of the current administration due to its dangerous and deteriorating conditions.

“Our earlier work was a little intimidating, especially during the previous administration when a lot of people would demonize us,” she said. “So being able to guide somebody from the south all the way up to the border is unique. Under the new administration, we feel at liberty to guide people using the legal routes for entry into the U.S. Without this guidance, a lot of people would pay human smugglers.”

In the important role that Matamoros serves in connecting asylum seekers with the services they most need, Krehbiel recognizes yet another connection with Matthew 25, namely the Resource Center’s efforts to dismantle structural racism, one of the three stated foci of the Matthew 25 vision.

“This is evident both in the work they do to help people who are excluded from our asylum system because of their nationality or the color of their skin, and because of what the Center can teach us,” Krehbiel said. “In traditional church mission or service models there is a divide between ‘those who are in need’ and ‘those who help.’ But from the beginning, the Resource Center in Matamoros recognized that the asylum seekers themselves are the best informed about how to respond to their needs.”

Because many of the Resource Center’s first employees were themselves asylum seekers, Matamoros has built up trust between the staff and those who seek asylum. “There is much we can learn about how to be in ministry when there are differences in power, wealth and social status,” Krehbiel said.

In the meantime, as the needs at the border continue to escalate, Zavala is grateful for the generous gifts of Presbyterians, which help the Resource Center maintain its presence there.

“Being able to be a support for people that have been so unsupported throughout their entire journey really makes a world of difference,” she said. “A lot of times if it weren’t for us, people would not have the resources they need to gain access to asylum and to escape these dangerous situations. Supporting us directly supports people having access.”

“From here my best wishes to you, hoping that you continue to do such a beautiful work,” she wrote as testimony, “and that you can continue to help more people in vulnerable situations. We will be eternally grateful to you.”