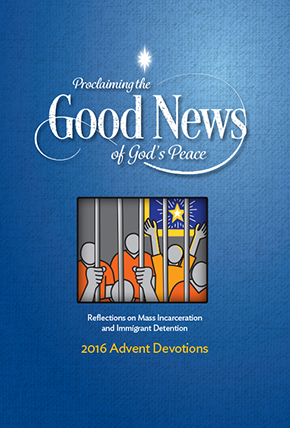 LOUISVILLE – Advent symbolizes the coming of Christ, and the hope and anticipation that comes with celebrating his birth and presence in our life. Each year the Presbyterian Peacemaking Program publishes Advent Devotion books that congregations can use as a resource for devotion, reflection, and action in the special time of the year leading up to Christmas. This year Proclaiming the Good News of God’s Peace: Reflections on Mass Incarceration and Immigrant Detention invites you to consider the challenges of mass incarceration and immigrant detention, and focus on the need for Christ’s transformative hope amidst the themes of desolation and isolation found in detention and imprisonment.

“Our country is putting record numbers of Americans, mostly young African Americans males, behind bars. We are detaining immigrants, often mothers with small children, in for-profit detention centers constructed as prisons to fulfill capacity quotas,” said Carl Horton, coordinator of the Presbyterian Peacemaking Program and editor of this year’s book. “Most of this is happening beyond our awareness. It’s easier to not recognize or acknowledge that this is happening in our communities today.”

The United States, despite having just five percent of the world’s population, is responsible for 25 percent of the world’s prisoners and has the world’s highest prison population rate, 716 per 10,000 people. Since 2005, nearly 750,000 immigrants have been prosecuted in federal courts for improper migration, contributing to mass incarceration and prison overcrowding. Immigrations and Customs Enforcement (ICE) more than quadrupled its detention of asylum seekers between 2009 and 2014, many of whom are held in prolonged detention without bond hearings.

A volunteer chaplain writes in one reflection that as many as 3,000 immigrant women and children are currently incarcerated and seeking asylum in South Texas. Most are victims of horrific violence from Central America’s Northern Triangle of Guatemala, Honduras, and El Salvador. They are seeking asylum not to have a better life, but to have a life at all because to remain in, or return to, their homeland could mean death.

Another reflection, written by a Presbyterian teaching elder, recounts her visit with a young girl held in a detention center south of Phoenix. The girl came to America seeking a new life after witnessing her brother’s murder, but after 19 months, is still waiting for freedom outside the razor wire and electrical fences designed to hold criminals. “I pray so I have hope,” says the young detainee.

“Jesus would be there, visiting the imprisoned, proclaiming release to the captives, challenging our treatment of strangers and immigrants, exposing the injustices of our systems,” writes Horton in the book’s introduction. “Thankfully, Presbyterians are there: ministering with the incarcerated, visiting the detained, working for reform of broken criminal justice and immigration systems.”

Congregations and individuals can order Proclaiming the Good News of God’s Peace: Reflections on Mass Incarceration and Immigrant Detention online at the PC (USA) church store. Each copy is 50 cents.

Advent Devotions are supported by the Peace & Global Witness Offering.