by Gwen Haspels | Gwen and John Haspels served as mission co-workers in Ethiopia for nearly 40 years. They worked primarily with the Suri people and continue their ministry in the region.

Two years ago Presbyterian mission co-workers John and Gwen Haspels were driving down a road in Ethiopia when a man carrying an assault rifle jumped out in front of them. As the couple drove on, the man fired at them, severely injuring both of them. Presbyterians Today recently invited them to reflect on that fateful day and what reconciliation means in the aftermath of such an attack.

Even though you intended to do harm to me, God intended it for good.—Genesis 50:20 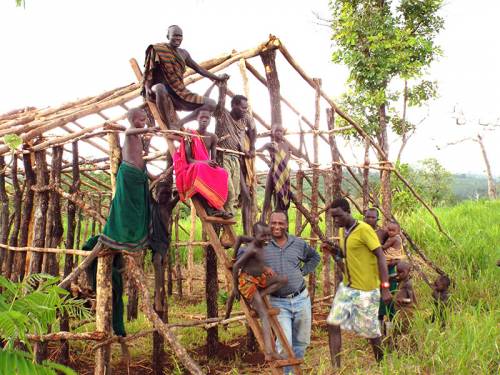 Ethiopian people work together to build a new church. More than half of the population of Ethiopia is Christian. The PC(USA)’s partner church, the Ethiopian Evangelical Church Mekane Yesus (EECMY), includes 17 synods, five of which are Presbyterian.

On October 1, 2014, John and I were traveling to the remote village of Moga, Ethiopia, to build a house for the Wycliffe Bible translator. We made a detour to allow a Suri Baale man to catch a bus in Dima, back to his work in Mizan. Shortly after crossing a river valley known as Chelema Ishet (Valley of Darkness), we rounded a corner and a man clutching an AK-47 assault rifle jumped into the road in front of us. Not knowing his intentions, we kept going and he jumped out of the way. As we passed by he shot through the open passenger’s window. The bullet hit me in the mouth, taking out 20 teeth and part of my upper left jaw, which splattered across John, causing multiple lacerations. Pieces of “shrapnel” hit John in the forehead and put out his left eye. The bullet hit John’s clavicle, breaking it, then ricocheted into the roof above his head. John was yelling, “I’ve been hit!”

As I turned to see where John was hit, I saw my reflection in the side mirror, and the left side of my face was gone. I briefly thought, “Is this the last day of my life?” I covered my face with my scarf and tried to help John. Two passengers had bailed out, and the two remaining were yelling and wailing. We were weaving all over the road as John yelled, “I can’t see!” I wiped John’s right eye to clear the blood dripping from his forehead, and the vehicle straightened out. 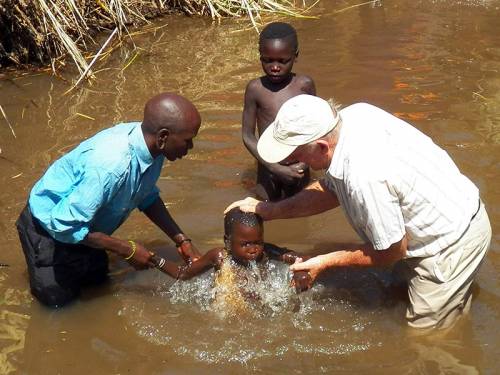 We drove only a little way before John had to stop because of dizziness. I gave him something to drink and his head cleared. We drove on to Dima. John asked me if I remembered the covenant I had made with my two daughters and an Ethiopian friend to pray only thanksgiving and praise prayers for the month of October. I nodded and we both praised and thanked God for what had just happened. John thanked God for 65 years of good use of his eye. I reminded him that he was 67.

We also both verbalized forgiveness for the young man who had shot us: “Father, forgive him, for he didn’t know what he was doing.”

In 30 minutes we got to a little clinic in Dima. As we walked in, the nurse in charge asked belligerently, “What are you doing here?” I took the scarf down from my face. Looking horrified, the clinic workers sprang into action. I was given IV fluids, and they tried to stitch John’s bleeding face and neck. We were taken in a rickety old ambulance to the hospital four hours away. I couldn’t lie down due to blood in my throat and a lacerated tongue, so John held me with his arms, checking every little while to see if I was still alive. It was a hellish trip, but we finally arrived at the hospital and were met by a doctor friend, who got me into surgery for repair of my tongue and a new dressing. We spent the night in the hospital with crowds of people coming and going—even into the surgery area. All our friends from the town came to see us—some weeping and wailing, others praying. My Ethiopian daughter came to see me and promptly fainted. I told them all, “No weeping and crying! We are praising and thanking God!”

The next morning we were evacuated by Abyssinian Flight Services. The pilot suggested a plane-to-plane transfer at the Addis Ababa airport because, he said, “If you ever get into a hospital in Addis, you will never get out.”

Our daughter Heather finally convinced the airport authorities to let her come out to the plane. As she entered the plane weeping, I told her, “No crying! We are only praising God this month.” She smiled tremulously. We were flown to Milpark Hospital in Johannesburg, South Africa. I was immediately taken to surgery and knew very little for the next week. Our son John came from Kenya to help us, and our daughter Desta came from Kansas City. She stayed the whole two months I was in the hospital. Heather came with her family, and our son Chuck came from Kansas for a week.

John had surgery to clean out his left eye. Fragments of bone and filling were extracted. He had no pain in his broken clavicle the whole time in South Africa. Many prayers were lifted up on our behalf—40,000 hits on the Presbyterian Church (U.S.A.) website in the first two days. What a testimony to the power of prayer as we both healed so quickly! Multiple surgeries were done to reconstruct my jaw and face, and finally, in January 2015, we returned home to the United States for more surgery. John’s eye surgery was done a second time, with another two fragments removed, but sight did not return. My face has been completely rebuilt by plastic surgery.

Practicing forgiveness along the way

Wherever we go to share our story, we ask people to pray for the young man who shot us. We talk about the miracles God did in keeping us alive and about all the people he set in place to help us along the way. 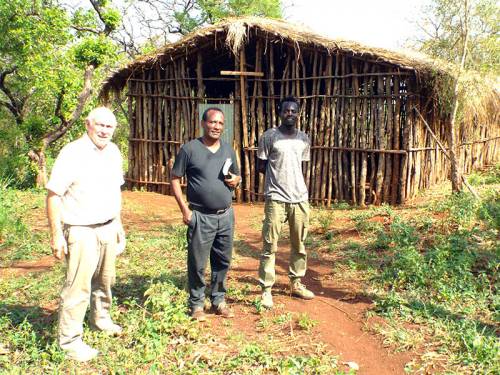 John Haspels works with synod leaders in Ethiopia on issues of reconciliation at both the congregational level and the denominational level.

How do you forgive something like this? You practice—long before something terrible happens. God began to teach me about forgiveness when I was a young mother of two on the mission field, and John was always gone. I remembered the words of Basilea Schlink, founder of the Evangelical Sisterhood of Mary. She says there are times we need to forgive someone who isn’t actually doing anything wrong. John was doing his job and I was unhappy about his being gone all the time. I began to forgive him and gained much peace.

More lessons on forgiveness came in the years among the Suri people—so much killing, so much violence against the innocent. I had to forgive. When we forgive, we are not saying that what was done is OK. It is not OK. It is not OK that John lost his left eye and that I have been through so much surgery. But when we forgive and bless the offender, we get healing, and we let God repay them. “Vengeance is mine,” says the Lord. Praying for and blessing our enemies brings us to a point where we ask God not to repay them but to forgive them.

There is also a need to ask for forgiveness. We all do things that need to be forgiven, but sometimes we have to ask forgiveness when we haven’t done anything wrong. Why would we want to do that? To be reconciled and to be healed. Our daughter was in nursing school under an instructor who had nothing good to say about Christians. I counseled her to pray for her, to bless her and to thank God for her. The Holy Spirit went a step further. The Spirit encouraged her to ask forgiveness of her instructor for whatever Christians had done to her. It changed the whole tone of this instructor, and she no longer denigrated Christians in class.

John has had opportunities to return to Ethiopia, to encourage the Suri church and to baptize many new believers that God is bringing into God’s kingdom. In March he baptized people close to the village of the young man who shot us. At the baptism John heard that the young man also had shot and killed two other people and had to run for his life. The good news is that a church is being built in his village. Isn’t God awesome? God has taken the prayers for the young man and caused people from his village to come into the kingdom!

John has also had the opportunity to work on reconciliation between church leaders in Suri land, between an evangelist and the synod, and in a wonderful all-day conference to help cleanse old wounds between synod leaders and congregational leaders and members. With weeping and hugging, forgiveness was asked for and received, and feet were washed in humility. God has begun a new thing and will bring it to completion. We hope to return to Ethiopia in October this year and will share our story of forgiveness with other tribes who are enemies.