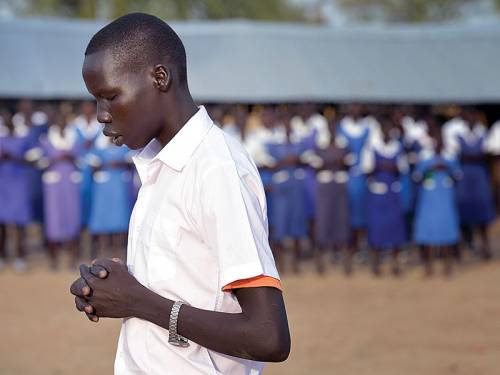 When violence forced John Khamis to flee South Sudan for a refugee camp in the scrubland of Uganda, he did not leave behind his commitment to Christian peacebuilding in a country embroiled in civil war.

Khamis lives in Bidi Bidi, the world’s largest refugee camp, along with 270,000 other South Sudanese from both sides of the conflict. They are at the camp to flee violence in their homeland.

In the camp, food is rationed, and clean water is scarce. Residents are given rudimentary materials to build dwellings and seeds to plant vegetables on small plots of land. But it doesn’t feel like enough to thrive. The conditions are hot. And crowded. The anger between rival ethnic groups sometimes threatens to spill over. The conditions in the camp put Jesus’ call to love your neighbor to the test.

Khamis strives to heal bitterness as he bears witness to Christ’s call to reconciliation in a country in which about 60 percent of the people are Christians, 33 percent adherents of folk religion and 6 percent Muslims. He is an Episcopal clergyman and for many years served as a trauma specialist with RECONCILE International (Resource Center for Civil Leadership), a South Sudanese ecumenical organization that works for a healthy, peaceful and democratic society in South Sudan. In July 2016, the staff had to leave RECONCILE’s offices in Yei, South Sudan, because the fighting became so intense. 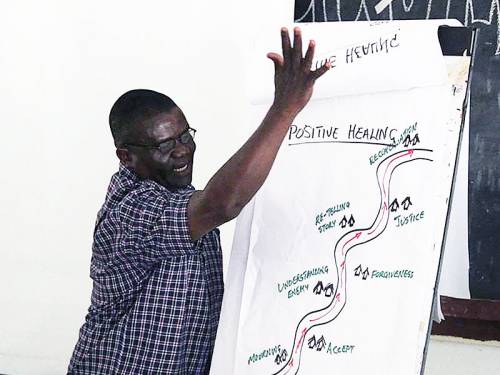 John Khamis taught a class on trauma healing at the RECONCILE Peace Institute in South Sudan before violence forced him to the Bidi Bidi refugee camp, where he continues to work for reconciliation. (Othow Okoti)

In the refugee camp, Khamis is at the center of efforts to initiate trauma healing and peacebuilding. He and others seek to heal the wounds of war and displacement, and they bring together members of rival ethnic groups to engage in peacebuilding activities. Some alumni of the RECONCILE Peace Institute, who live at Bidi Bidi, and sense a call to continue the ministry of peacebuilding, join Khamis in this work.

Gifts to the PC(USA)’s Peace & Global Witness Offering will help RECONCILE continue its dogged pursuit of peace amid tremendous adversity. “This offering helps the Presbyterian Church (U.S.A.) to proclaim Christ’s peace in places both near and far,” said Bryce Wiebe, the PC(USA)’s director of Special Offerings. “Congregations retain a portion of the offering to respond to local needs most urgent to them, and the national church uses its share to address pressing global needs for peace, including places like South Sudan.” Most congregations receive the offering each year on World Communion Sunday, which is observed on the first Sunday of October.

Khamis yearns for peace and works faithfully to end violence, but he does not remember an extended period when the region known as South Sudan was at peace. Prior to South Sudan’s independence in 2011, the people in the southern region of Sudan were engaged in a decades-long civil war with the Khartoum-based government in the North.

After independence, political and ethnic tensions began to mount among the South Sudanese; the result has been 50,000 deaths, 1.9 million internally displaced people and 1.8 million who live as refugees in other countries. While the war rages, 5.5 million people, almost half of South Sudan’s population, face severe hunger, according to the United Nations. Famine has been declared in parts of South Sudan, and tens of thousands face starvation.

Like others at Bidi Bidi, Khamis struggles to cope with life in the camp, and he misses his home and the life he once knew.

“Sometimes life here is so overwhelming I find myself asking if this is really me,” Khamis acknowledged. “I once had a comfortable home and plenty of clean drinking water.” 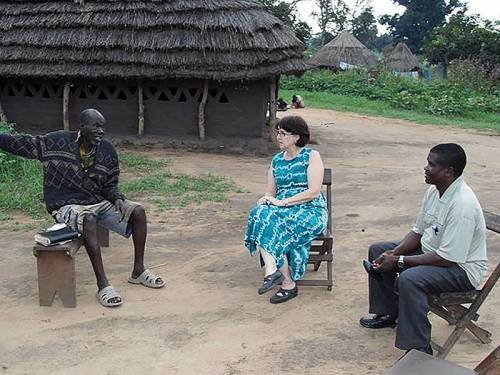 Occasionally, Khamis hears “war songs” directed at a rival ethnic group, which are sad reminders of the work that needs to be done. He is moved by other songs that are sung in church that voice a longing for peace and prayers for God’s abiding presence. He said he was brought to tears by a lament sung by youth that expressed feelings of abandonment. They sang: “We are perishing. We are perishing. Who will help us survive here?”

So Khamis and others seek to incarnate God’s presence at the camps. One way he envisions extending God’s healing is through peer counseling in youth centers at Bidi Bidi, where youth come to socialize and play board games.

“Here in our camp we can train peer counselors from each of the three zones (in the camp),” he said. “This is very important.”

Youth and children have paid a particularly high cost in the conflict. Many who have come to Bidi Bidi have lost mothers, fathers or siblings, and some arrive at Ugandan refugee camps alone. Such circumstances make the interventions that Khamis is working to accomplish even more important.

In Yei, Khamis lived in a duplex apartment adjacent to an apartment occupied by Presbyterian mission co-workers Shelvis and Nancy Smith-Mather and their children. The Smith-Mathers were in the United States when Yei was attacked and, like Khamis, have been forced to do ministry on the move because of the violence. They are now based in Arua, Uganda, and are facilitating the peacemaking and trauma healing work in the refugee camps from there. The Smith-Mathers have served on the RECONCILE staff since 2011.

Shelvis notes that Khamis is no stranger to adversity. Prior to the formation of South Sudan, he did relief work among prisoners of war during the conflict that preceded South Sudan’s independence. His determination to help prisoners was fueled by personal experience.

“While he was in seminary, he was captured at different times by both sides and was accused of being a spy,” Shelvis said. “He was able to flee each of those times he was detained.” After seminary, he received additional training in counseling and social work. “He went to great lengths to get training and go back into the conflict and be a presence of God’s love and care for people in greatest need.” As a RECONCILE staff member, he traveled throughout South Sudan doing trauma work with orphans, survivors of sexual violence and child soldiers.

Achol Majok Kur, chair of the Women’s Desk for the South Sudan Presbyterian Evangelical Church (SSPEC), also is committed to pursuing peace and helping victims of violence in South Sudan. She has worked with internally displaced people who have found safety in United Nations camps and has organized SSPEC women to participate in a national dialogue called for by South Sudan President Salva Kiir.

Women, she said, carry both huge responsibilities and vulnerabilities in South Sudan. “They are the breadwinners, as many women are widows,” she said. “They are the heads of families. Imagine this at a time of hardship.” While shouldering this burden, she adds, they are “subject to killing, domestic violence, rape, forced/arranged marriages and no access to employment due to no or low levels of education.”

Kur will be sharing her story throughout the United States this fall as a Presbyterian Church (U.S.A.) International Peacemaker. This ministry, another beneficiary of the Peace & Global Witness Offering, seeks to help Presbyterians better understand peace and justice issues around the world and offers insights that inspire Presbyterians to greater faithfulness.

Kur says she will tell U.S. congregations about South Sudanese churches’ advocacy for peace and about their hope that God will heal their land. “In the absence of peace there will be no education, no health services, no food, no development,” she said.

In addition to speaking prophetically in their own country, South Sudanese churches reach beyond their country’s borders in their quest for peace, Kur said. Churches ask the international community for investments in peace rather than armaments, she said. The voices of South Sudanese partners are amplified by the Presbyterian Ministry at the United Nations, which also receives funds from the Peace & Global Witness Offering.

The PC(USA) has been an important partner for churches seeking peace in South Sudan, Kur says. “I will thank the churches for their tireless support and for putting South Sudan in their prayers.”

Shelvis Smith-Mather noted that some groups have backed away from financial commitments as the turmoil in South Sudan has escalated, but he said the PC(USA) has maintained its support.

Gifts to the Peace & Global Witness Offering continue this consistent commitment to South Sudan. Half of the offering goes to the PC(USA) for its work to transform cultures of violence in places like South Sudan, but congregations can retain up to 25 percent for local peacemaking ministries. Another 25 percent goes to mid councils for similar work.

“This offering exists so that the whole denomination can proclaim the peace of Christ, but it is primarily about the local congregation,” Wiebe said. “What I’m talking about includes more than the 25 percent that stays in the local church. It also encompasses the resources and projects of the national church that are designed to equip congregations for this work.”

Congregations, he says, are helped by tools that teach peace and reconciliation skills, connect peacemakers across the country and around the world, facilitate congregational dialogue in times of disagreement, aid congregations seeking to assist veterans returning home and equip congregations to stand with people affected by domestic violence through the Presbyterian Peacemaking Program.

Peacebuilding in South Sudan is highlighted in this year’s offering promotion because of its tremendous need of direct support and international advocacy, Wiebe says. However, he stresses that U.S. Presbyterians can learn from “the persistence and hope that serve as a foundation of their dream for peace.”

“It is my hope that congregations all over the United States will be inspired by their faithful work to bridge divisions,” he said, “and then respond to the racial, ethnic, political and religious divides in their local communities.”

By the numbers: The South Sudan conflict