Joseph occasionally returns to the U.S. and is available to speak to congregations. Email him to extend an invitation to visit your congregation or organization.

About Joseph Russ’ ministry: Joseph will minister with and support the Calvinist Reform Church in El Salvador and their education and development agency, Alfalit, while strengthening a network of partners working on migration issues in the Northern Triangle. Based on the experiences of migrants and local partners themselves, U.S. individuals, congregations, presbyteries and mid councils can join them in solidarity and advocate for policies that support migrants and prevent forced migration. Together, all of us can help people who want to stay in their homes stay, and welcome those who need to migrate.

Regional context: The Northern Triangle of Central America refers to the three Central American countries of Guatemala, Honduras and El Salvador. These countries are unified not only by their geographic proximity but by the large numbers of people who migrate irregularly from this region to the United States, Mexico and Canada. Widespread poverty, violence, and corruption in the Northern Triangle contribute to migration to diaspora communities that were established in North America during the turbulent 20th Century. In particular, brutal civil wars in Guatemala (1960-1996) and El Salvador (1980-1992) led to a massive spike in migration, and as Central American communities grew in North America, this created networks of support for future migration.

The Northern Triangle suffers from causes that favor migration and forced displacement. These are extreme poverty, lack of job opportunities, insecurity and violence. Food insecurity occurs within a framework of limited access to social protection, depletion of natural resources and adverse impact of environmental degradation and climate change. Agriculture and rural development are considered key to effectively addressing the causes of migration. This region of extreme vulnerability due to its damaging social, economic and environmental consequences deserves special attention.

Economically, the Northern Triangle is one of Latin America’s poorest regions. According to internal census data, sixty per cent of Hondurans and Guatemalans live in   poverty. As countries like the U.S. rely on exploitable migrant labor to keep profits high, the remittances Salvadoran immigrants send home to family form almost 25% of El Salvador’s GDP, entangling the two countries economically in a way that depends on the exploitation of immigrants in the U.S.

The pace of economic growth in El Salvador, Guatemala and Honduras has been low and has not allowed these    countries to generate substantial job opportunities for a predominantly young and growing population. Twenty-           five percent of the population are young people between 15 and 35 years old. The young population also faces high levels of unemployment, which contribute to poverty and crime. Population growth, the lack of opportunities and the overflow of violence and insecurity have become the main drivers of emigration from these countries.

In addition, chronic violence can be attributed to longstanding civil wars in the region, political volatility and expansive criminal networks. In the mid-nineties, the United States ramped up deportations with the Antiterrorism and Effective Death Penalty Act and the Illegal Immigration Reform and Immigrant Responsibility Act of 1996. The increase in deportations included many members of gangs that began in Los Angeles during the 80s and 90s. These gangs took advantage of insecurity and instability in the region left over from a violent century and have grown into larger criminal groups with transnational ties that control large swaths of territory and through violence and threats, sustaining themselves primarily through extortions. Widespread gang violence and the states’ iron fist response have created violent conditions which contribute to migration today.

The Northern Triangle has also experienced high rates of both emigration and migration. Research conducted by the PEW Research Center found that between 2007 and 2015, the number of emigrants from this region into the U.S. rose by 25%. According to surveys and other research conducted in this region, the high levels of migration and emigration can be attributed to dire social, economic and environmental factors.

About Joseph: Joseph writes, “I have known I wanted to be a pastor since I was 15 years old. After reluctantly sharing a message as part of a youth-led service, one of our church members came up to me and said, ‘You know… you should be a pastor!’ It was the first time I’d ever considered it, but after some prayer and discernment, I realized this was where God was calling me.

I first came to El Salvador as a young adult through the United Methodist Church’s young adult missions program in 2016 after graduating from college. I knew I wanted to be a pastor, but I wanted to experience something else first, to travel abroad, and to do justice work of some kind. So, I signed up for the program. Visa issues delayed me from getting an assignment for months, but despite the temptation to move on and try something different, I stuck with the God’s call until I was assigned to El Salvador.

In El Salvador, I fell in love with the people, the country, and the rich tradition of liberation theology. I knew this was where God was calling me. I believe that the best way for uncovering the richness of Christian theology is through intercultural exchange, where we can bring together a variety of tools of analysis to come closer to an understanding of God, the world, each other, and ourselves. So, I look for attempts to invite people into dialogue and engagement as we grow together and strengthen our faith.

Sometimes, I feel like Jacob on the banks of the river wrestling with the angel, struggling to resist the God’s call all in an almost antagonistic relationship with God. Whether it feels hard to accept, or new things come up, or it’s not “my plan,” it feels like a challenge. But then, I settle into a dance, a perichoresis as some early church theologians describe the Trinity. Moving together, holding hands in a wide circle, exchanging spaces with one another in a divine dance.

It’s a dance that we can join and that we can invite others into. It’s the dance that exemplifies the relationship we are called to pursue in missions, one where we don’t speak for others, but listen to one another tell our own stories. One where we are in a mutual relationship holding hands in a circle, not a hierarchy. With one above the other. When I say I am discerning, that is usually the struggle as I look for the dancers, listen for the beat, search for how to join.” 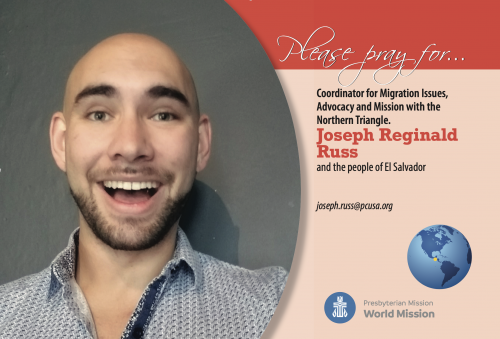 Use this card as you pray Joseph Reginald Russ serving Christ in El Salvador as Coordinator for Migration Issues, Advocacy and Mission with the Northern…

Give in honor of the ministry of Joseph Russ