Chenoa occasionally returns to the U.S. and is available to visit congregations. Email her to extend an invitation to visit your congregation or organization.

Chenoa organizes, accompanies, and interprets for visiting delegations, helping to ensure that these visits reflect the mutual mission priorities of the partners. She sets up in-country logistics, assists in planning itineraries, and works with trip leaders and the communities that are visited by the delegations.

Peru was home to many Andean civilizations, including the Inca Empire, which was conquered in 1532 by Spain. Due to the vast territory and relatively easy access to gold and silver deposits, Peru was by far the most important colony held by Spain. Peru declared its independence in 1821, and with the help of General San Martín of Argentina and Simón Bolívar of Venezuela, the Spanish were defeated in 1824. After that, Peru began a long struggle to establish constitutional government and to diversify an economy heavily dependent on extractive industries. From 1980 to 2000, Peru battled internal terrorist movements. Abuses by both terrorist groups and the armed forces left a legacy of violence in the highlands and the jungle that deeply damaged Peru’s social fabric. A Truth and Reconciliation Commission worked from 2001 to 2003 to carefully document more than 70,000 deaths during this period.

Much of Peru’s indigenous population lives in poverty, both in remote areas and on the urban periphery. The Joining Hands Peru Network was started in the 1990s with the help of the Presbyterian Hunger Program. The member organizations work at the grassroots level, accompanying communities and non-governmental organizations as they empower at-risk communities and challenge systems that generate hunger and cause environmental depredation. The Evangelical Church of Peru (IEP) began with the efforts of Swedish and Scots missionaries in the 1890s and follows a Presbyterian system of government. Rev. Dr. John Mackay, the noted ecumenist and former president of Princeton Seminary, was sent as a mission worker to Peru by the Free Church of Scotland in 1916.

Although she grew up as the daughter of Presbyterian co-pastors, Chenoa never imagined her life would take the journey towards mission that it has.

Chenoa’s interest in long-term mission service did not begin to take shape until after she earned an elementary education degree from Wittenberg University in Springfield, Ohio, and became a Presbyterian Young Adult Volunteer (YAV) in Kerala, India. In India, she taught English for a primary school of Sevika Sanghom, the women’s group of the Mar Thoma Church. While in India, she immersed herself in the local culture and, guided by mission partners, began to see the world, its connections, its differences and her role in it in a new light.

About a year after finishing her assignment in India, Chenoa accepted a mission appointment in Sri Lanka as companionship facilitator for Praja Abhilasha (People’s Aspirations), a newly formed Joining Hands network. This network was created after the 2006 tsunami, whose destruction affected many fishing communities and their right to land and water. In a situation further complicated by a three-decade-long civil war, Chenoa joined the network in collaborating with communities to protect the interests of fishermen, tea plantation workers and their families.

As Chenoa was completing her term in Sri Lanka, she realized the call to justice and to walk with our neighbors was now deeply engrained in her. She says Micah 6:8’s call “to do justice, love kindness, and to walk humbly with your God” expresses her summons to service. Hearing those words, she sensed a call to her next assignment in Bolivia.

Chenoa accompanied the Bolivian Joining Hands Network, UMAVIDA (Joining Hands for Life), for eight years, walking with them in their struggle for environmental justice. Though Bolivia is the poorest country in South America, it is rich in minerals that support the economy, but contaminate the people. UMAVIDA, a network of grassroots groups, churches and non-government organizations, advocated for communities affected by mining contamination, calling for clean water and an updated Water Law.

As UMAVIDA began to re-think its mission in Bolivia’s volatile political context, Chenoa accepted a call to work as partnership coordinator with PERUSA in Peru. In this role, she helps to build vital, interdependent mission partnerships between U.S. churches and presbyteries and PC(USA) mission partners in Peru.

Chenoa’s faith, grounded in advocacy and justice, developed through her relationship with her parents, Revs. Carleton and Elinor Stock. Through their love, sustained presence, encouragement and questioning, they have fully supported her in each step of her discernment for ministry. Seeds of faith planted through her parents’ influence grew when she was a student at Wittenberg University, where she served on the chapel music team. Building on this foundation, Chenoa has continued to mature throughout her years of service.

“My faith,” Chenoa says, “is grounded in a call to share God’s love and compassion in a time when many experience inequality and have lost hope, but they know that they can create change when the spirit of love and trust are shared.”

Chenoa is a native of Pittsburgh and a member of the city’s East Liberty Presbyterian Church. She is accompanied in her service by her husband, José Luis Claure, and son, Leandro Aiden. 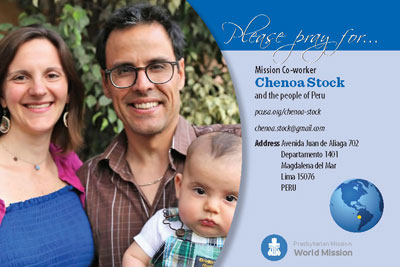 Use this card as you pray for Mission Co-worker Chenoa Stock. The card includes a photo of her and an overview of her work. Chenoa…

Give in honor of the ministry of Chenoa Stock