Eric and Betsey occasionally return to the U.S. and are available to speak to congregations. Email them to extend an invitation to visit your congregation or organization.

About Betsey and Eric’s ministries: Betsey is working as a facilitator for the Intercultural Encounters Program of the Protestant Center for Pastoral Studies in Central America (CEDEPCA). CEDEPCA provides North American church groups, theological seminarians, and college/university students the opportunity to discover Guatemala in all its diversity, beauty, and complexity, and to experience the everyday life of Guatemalans through immersion programs. Betsey is part of the team that receives visiting groups, plans and facilitates their educational program and itinerary, interprets, and leads reflection discussions.

The Protestant Center for Pastoral Studies in Central America (CEDEPCA) is a long time Presbyterian World Mission partner. It has close ties with many presbyteries and Presbyterian congregations across the United States. In addition to the Intercultural Encounters Program, CEDEPCA oﬀers training in pastoral, biblical, and theological studies, oﬀers programs in women’s empowerment, and provides ministry in times of disaster.

Country context: Guatemala is the most populous and the most industrialized country in Central America. It is also by far the country with the highest percentage of the indigenous populations. The Maya, whose highly developed civilization from 300 to 900 C.E. made magnificent advancements in architecture, music, and mathematics, built an extensive trade network. The Maya were enslaved in the 1500s by the Spanish conquistadores, who forced the Maya people to serve colonial estate owners. Since gaining independence in 1821, the country was ruled by the military for most of its history, except for two popularly elected governments that provided ten years of democracy from 1944 to 1954. Amid U.S. government claims of communist influence, the democratically elected government was toppled in 1954 in an invasion by U.S. backed Guatemalan exiles. The ensuing military rule helped perpetuate an intense concentration of wealth and land that left the indigenous Maya population almost totally disenfranchised and thus contributed to a 36-year civil war. While peace accords were signed in December 1996, the country continues to struggle with violence, corruption, and economic challenges. Though traditionally a Roman Catholic country, a sizable portion of the population now belongs to Protestant (mostly Pentecostal) churches.

About Betsey and Eric: Betsey writes, “With the Intercultural Encounters team at CEDEPCA, I will help to design trips and seminars that are transformative for our North American visitors, equipping them to return home with a broader perspective on the current context. I am drawn to this work because I see the urgent need for understanding and bridgebuilding, especially on the part of citizens of the U.S. whose policies directly influence our brothers and sisters in Guatemala. Intercultural Encounters also offers everyone involved the opportunity to see Christ in one another and to see the beauty in our shared communion.”

Betsey tells the story about the semester she spent in Central America with twenty-five other students from Whitworth College. On that trip, she heard stories that would change the way she understood herself as a Christian, and she saw the actions of her own government had a significant impact on the people in Central America. Having served churches in the United States for sixteen years and leading people on short term learning and service trips, she feels ready to do similar work alongside Guatemalans to help people grow through intercultural encounters.

Eric has been a professional musician in the U.S., playing and teaching trumpet in the community and church and looks forward to using music as a way to connect with people in Guatemala. Eric will also serve in ministry in the home with the Moes’ three school-age children.

Betsey and Eric are looking forward to experiencing life in Guatemala: the beautiful landscape, the colors of the textiles and flowers, and the warm hospitality of the people. They are looking forward to joining with a strong partner like CEDEPCA, who is clear about its mission and has been doing significant work in education and justice in the name of Jesus Christ.

Betsey and Eric write, “We are excited about the possibilities that will come through story-sharing, music-making and friendship-building. We are confident that the Spirit of God is always doing something new and creative in the church. We hope that through Intercultural Encounters, we and others will see the world differently and feel emboldened to live out our faith in new ways.”

Watch a video of Betsey and Eric Moe 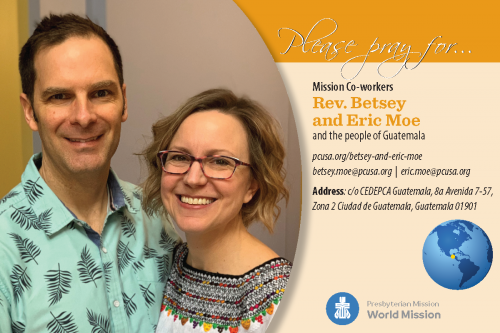 Use this card as you pray for mission co-workers Betsey and Eric Moe. This card includes a photo of them and a description of their…

Give in honor of the ministry of Betsey and Eric Moe