Leslie is periodically in the United States and available to speak to congregations as her schedule permits. Email her to extend an invitation to visit your congregation or organization.

As regional liaison for Mexico and Guatemala, Leslie Vogel helps Presbyterian World Mission in discerning how to minister in Mexico, and in establishing new partnerships there. She also supports Presbyterian World Mission involvement in Guatemala. She serves as a facilitator of PC(USA) support for partner programs, relationships and activities, and as an implementer of regional strategies. Leslie supports PC(USA) mission personnel through communications, information sharing, mentoring/guiding, and encouraging missiological reflection. In addition, she serves as a resource for sharing connections and information between partner and PC(USA) entities in conjunction with World Mission. Leslie facilitates and seeks to strengthen healthy, effective and missiologically appropriate relationships between PC(USA) congregations, presbyteries and partners in Mexico and Guatemala.

Mexico has a rich history of many ancient and powerful indigenous groups. The Aztec people were at the height of power when they were conquered by the Spanish in the early 1520s. Mexico’s independence from Spain was won in 1821. The next century was marked by war and revolution that caused widespread death for the Mexican population. Finally, peace and stability came in the late 1920s.

With the stability came marked economic growth until the economic crisis in 1982, which highlighted the massive burden of foreign debt carried by underdeveloped countries worldwide. Mexico again stabilized, but was hit by the negative impact of the Free Trade Agreement (NAFTA) signed with the United States.

Thus, Mexico has been described as a land of contrasts. Natural beauty and urban blight, poverty and affluence exist very close to each other. Most Mexicans have little chance of attaining an economically prosperous lifestyle. An answer for some economically, politically, and socially disenfranchised Mexicans is coming to the United States in search of better opportunities.

Guatemala is the most populous and the most industrialized country in Central America. It is by far the country with the highest percentage of indigenous population. Among the indigenous are the Maya, whose highly developed civilization from 300 to 900 C.E. made magnificent advancements in architecture, music and mathematics. In addition, the Maya built an extensive trade network. They were enslaved in the 1500s by the Spanish conquistadores, who forced the Maya people to serve colonial estate owners.

Since gaining independence from Spain in 1821, Guatemala has been ruled by the military for most of its history, with the exception of two popularly elected governments that provided a 10-year period of democracy from 1944 to 1954. Amid U.S. government claims of communist influence, the democratically-elected government was toppled in 1954 in an invasion by U.S.-backed Guatemalan exiles. The ensuing military rule helped perpetuate an intense concentration of wealth and land that left the indigenous Maya population almost totally disenfranchised and thus contributed to a 36-year-long civil war. While peace accords were signed in December 1996, they were never ratified by Guatemala’s Congress; the disparities continue and the country continues to struggle with violence, corruption and economic challenges. Those in marginalized communities, the majority of whom are indigenous (Maya, Xinka and Garifuna), remain politically, socially, and economically disenfranchised. Mission work done on behalf of the PC(USA) in Guatemala is done in partnership with the National Evangelical Presbyterian Church of Guatemala (IENPG) and the Protestant Center for Pastoral Studies in Central America (CEDEPCA).

As a student and later as a teaching assistant at Whitworth College (now University), Leslie participated in two extended study/service experiences in Central America that changed her life. “Sometimes I think they should put a label on trips like these that says: ‘Warning: participation in this experience could change the direction of your life permanently.’ Nevertheless, I do not regret those changes.”

In Central America, she encountered “incredibly faithful and courageous people who were facing life-threatening and life-altering situations.” Their committed discipleship amid great suffering changed the way she read and interpreted the Bible and led her to seek long-term service opportunities in the region.

Following graduation from San Francisco Theological Seminary in 1985, Leslie worked for almost eight years in El Salvador, a portion of which as a Presbyterian Church (U.S.A.) mission coworker. She also served two years under Presbyterian mission appointment as a co-coordinator of the Central American Education Program at Stony Point Center, New York.

Leslie shares that throughout her life and ministry, she has been guided by “a sense of call that has always been expressed best by the Hebrew prophet, Micah (6:8): ‘What does [God] require of you but to do justice, to love tenderly, and to walk humbly with your God?’ This call has challenged and nurtured my soul by leading me to serve as a bridge between peoples and cultures, especially with Latin American women on a grassroots level.”

After working for a number of years in local ministries and with immigrant populations in Arizona, Leslie returned to Central America in 2013, where she served as a facilitator for the Intercultural Encounters program of CEDEPCA in Guatemala. That work focused on challenges related to poverty and violence and to transformative education for church leadership, work that aligns with the three critical global issues identifed by Presbyterian World Mission as priorities: addressing the root causes of poverty, especially as they impact women and children; sharing the good news of God’s love in Jesus Christ; and engaging in reconciliation amidst cultures of violence in the U.S. as well as in Latin America.

Leslie expects that these critical global issues will continue to guide and inform her new role as regional liaison:

“I deeply value the work of our PC(USA) partners, and of US Presbyterians, in seeking to address the root causes of poverty with an understanding that women and children are the large majority of ‘the poor,’ and in examining the cultures of violence on many levels of society (political, criminal, and domestic) in Guatemala, Mexico and the United States. I value the many ways US Presbyterians are working with our global partners to address these concerns, grounded in our common faith in Jesus Christ.”

Leslie continues to live in Guatemala. Her adult children, Luz Rebeca and Amando, live in the San Francisco Bay Area. Leslie is a teaching elder of the Presbytery of the Grand Canyon and is affiliated with Palo Cristi Presbyterian Church in Paradise Valley, Arizona.

Watch a video of Leslie Vogel 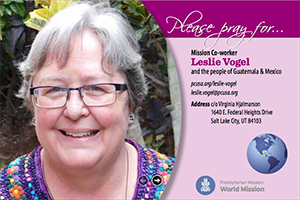 Use this card as you pray for mission co-worker Leslie Vogel. This card includes a photo and overview of her work. As regional liaison for…

Give in honor of the ministry of Leslie Vogel