This update comes to us from Sarah Marriott, Development Manager for Workers’ Dignity/Dignidad Obrera.

On the heels of Workers’ Dignity’s (WD) involvement in the successful Mosaic Apartment housing campaign which kept 89 BIPOC families housed, our team received another call from folks seeking anti-eviction support. This call came from a group of concerned tenants living at the W.C. Mobile Home community in East Nashville. This community faced a surprise two-month notice to vacate the trailer homes some had been living in for over two decades, so that a mixed-use luxury condo development could be built. Even worse, the tenants soon learned that property owner Tony Clouse had known about the eviction for over a year. Despite knowing these homes would soon be destroyed, in the months leading up to eviction, Clouse encouraged tenants to purchase trailers from him and stood by as they spent thousands on renovations. When the community came to Workers Dignity seeking support, they were out of time, and without much leverage. 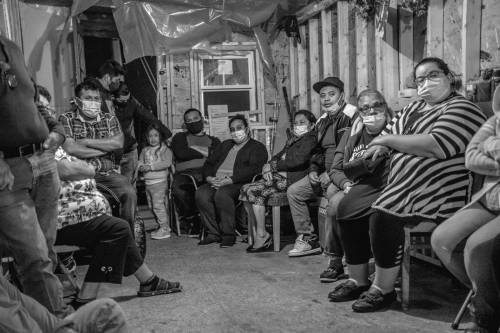 The WD organizing team along with the remaining 23 families rapidly began strategizing on the best way to move forward. The tenants formed a collective, which they named Dickerson Road Unidad y Lucha or Dickerson Road United in Struggle. Their first action as a collective was to show up at the August Metro City Council meeting where the rezoning decision that would permit their eviction was being voted on. Tenants and their families, concerned East Nashvillians, teachers, faith leaders, and Workers Dignity staff and supporters showed up en masse to pack the city council building, holding a rally outside beforehand. For two hours, tenants shared moving testimony about their love for their community, and their rights as Nashville residents.

“We are asking for more time for the people who have still not been offered any compensation for their trailers. We are not asking for a handout, we are asking for what we deserve for having lived in this community for anywhere from 3-25 years. We need to be treated with justice because this is our community and out of state developers are trying to displace us,” – Alejandra Vasconcelos (DRUS member).

Demands such as the one above were repeated by tenant after tenant. After hearing these individuals speak and witnessing the outpouring of community support, Metro council decided to delay the rezoning decision, giving the residents two more months in their beloved homes. 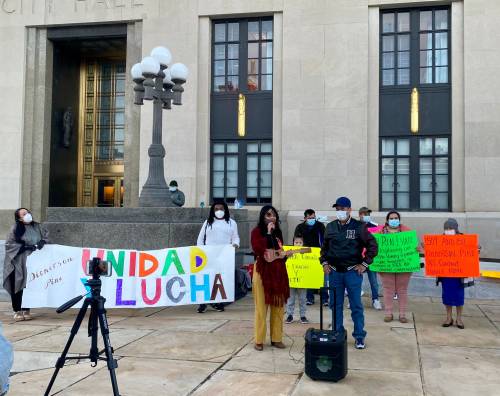 Recognizing that this was not enough, WD continued to work with the members of DRUS, and in October, showed up again to the Metro Council meeting to push for more time. Again, this demand was granted, and families were given until the end of 2021 to stay in their current homes. Simultaneously, WD and the members of DRUS were pushing the out of state developers Key Real Estate to provide families with financial compensation for the loss of their homes. For nearly five months, these discussions continued, WD secured legal representation for tenants, and continued with strategic public pressure campaigns. Finally, in December 2021, Key Real Estate bent to the demands of the DRUS tenants, and agreed to a $200,000 compensation package for the 23 families. This is on par with the largest compensation packages any trailer park community has ever won in the United States, and is proof of the power that communities hold when they come together to fight for their rights.

Workers Dignity is immensely proud to have been a part of DRUS’ fight for justice, and remains in awe of the leadership and dedication that these individuals showed throughout the challenging campaign.