Have you ever seen a movie that starts with a bird’s-eye view of a person at their desk or in their bed? Then the camera rises straight up and you travel through the ceiling and you’re looking down on the house, the neighborhood and soon the city as the camera goes up, until gradually you see the whole state, the country and then the planet.

Kathia Ramirez is kind of like that. I’ll explain.

Kathia was born and grew up in Los Angeles, although her roots are from Oaxaca, Mexico. She has been reclaiming her indigenous Zapotec identity and continues to learn about their knowledge and practices. After hearing that her great-grandmother was a town medicine woman in Oaxaca, Kathia became interested in herbal medicine as well. After graduating in 2013 from Mount Holyoke College, Kathia joined up with the Farmworker Support Committee/El Comité de Apoyo a los Trabajadores Agrícolas (CATA).

Kathia is the food justice coordinator at CATA, which was founded in 1979 by migrant farmworkers and is a long-term grantee partner of the Presbyterian Hunger Program (PHP). She coordinates the Food Justice Program, which includes community gardens where farmworkers, former farmworkers, and other immigrant workers and their families produce food.

Kathia reminds us, “Farm work is really invisible. During the growing season, farmworkers sometimes get to the fields as early as 5 a.m. and go home as late as 9 p.m. — a 16-hour day.” She knows that addressing this and other challenges that immigrants face, along with the challenge of changing our food system into one that is equitable and sustainable, requires many people and groups working together at local, national and international levels. 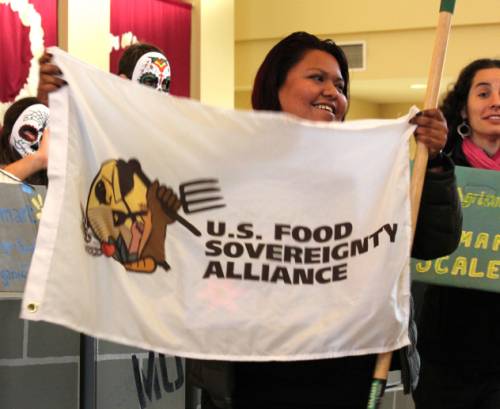 Focusing in, here is a shot of Kathia acting in a sociodrama (mística) about transforming the food system at the latest assembly of the U.S. Food Sovereignty Alliance (USFSA). The USFSA is a U.S.-based coalition of food justice, anti-hunger, labor, environmental, faith-based and food producer groups that works to uphold the right to food as a basic human right and to connect local and national struggles to the international movement for food sovereignty.

Imagine the camera rising up to look down on her and, rising farther, soon the three small CATA offices in New Jersey, the Pennsylvania and Maryland come into view.

Now it gains altitude so the view includes the United States as well. CATA is a member of the national USFSA as well as the Food Chain Workers Alliance, which campaigns for better conditions and the rights of workers throughout the food chain. 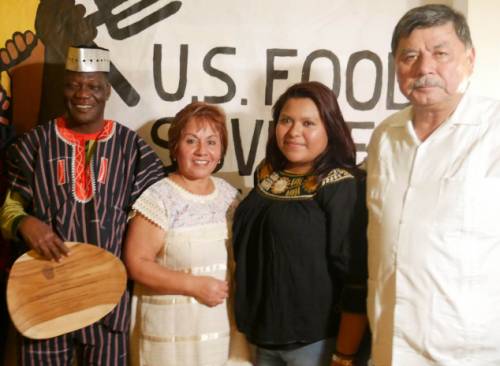 Farm work is the most dangerous and lowest-paid occupation in the whole country. “Farmworkers labor long hours to earn more money,” Kathia says, “despite the toll it takes on their bodies, which can later lead to long-term illnesses. Common health risks are work-related musculoskeletal disorders and exposure to pesticides.”

Panning out farther, in the lower right of the screen we see the island nation of Cuba, where Kathia represented CATA at a meeting of the People’s Agroecology Process, which emerged from an Agroecology Encounter hosted by a member group of the USFSA. 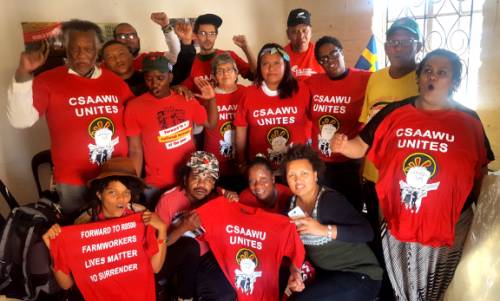 Going higher, South Africa comes into view. There, Kathia (in the middle with light blue headband) joined a farmer from Mississippi, farmworkers from Florida and Washington, and a food justice advocate from New York — all members of the USFSA — to learn from and strategize with South Africa’s Surplus People Project and food sovereignty practitioners from all over the world.

PHP has learned from Kathia, CATA, and partners around the U.S. and world that we are stronger together and it is only a movement — made of individuals, congregations, mid councils, community-based organizations, nonprofits and broad coalitions — that has the capacity to move our communities, nation and world toward compassion, peace, equity and sustainability. To get at the roots of hunger and poverty in the U.S., PHP joins these partners to dig into the interrelated justice issues of race, gender, food, agriculture, labor, environment and climate.

Thanks to the trust and generosity of Presbyterians, PHP financially supports CATA and many local, state and regional groups, as well as national coalitions like the Food Chain Workers Alliance and USFSA. These alliances connect local leaders to one another, they amplify local voices and stories, and they provide leadership development opportunities. National alliances help cross-fertilize successful approaches and enable the development of coordinated strategies to resist the bad and build the good. This includes Congregation-Based Community Organizing coalitions, which have an amazing track record in battling homelessness and increasing affordable housing in our country.

Beyond financial support, PHP also collaborates to help strengthen these formations, while always deferring to grassroots, frontline and membership organizations that know the realities and solutions the best. The goal is certainly to build power. But as important, the ultimate aim — which transcends material gains or even winning or losing — is to build the relationships, the spirit of community and the love needed to turn the tide. 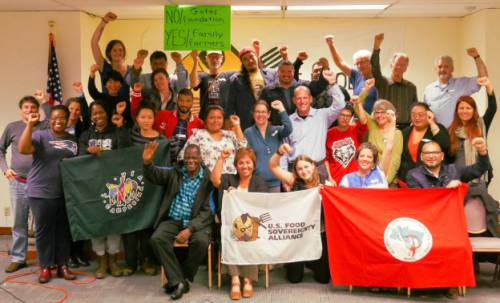 Kathia Ramirez (middle with white flowered blouse) joined with representatives of groups from across the U.S. and Africa at the Food Sovereignty Prize Encounter in Seattle in 2016. Photo credit: Colette Cosner

Don’t miss Kathia presenting on August 27 on Farmworkers in the Pandemic. Get the zoom link from sdopevents@pcusa.org or just go to the PHP facebook at noon (eastern). 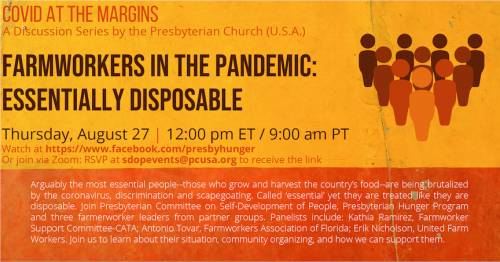