Four percent of the One Great Hour of Sharing Offering is used to address homelessness. The lack of affordable housing is one cause of homelessness as well as a root cause of hunger and poverty in the United States. Congregation-Based Community Organizing has a great track-record of successfully pushing towns, cities and counties to finance and incentivize affordable unit creation through Affordable Housing Trust Funds and other methods. The Presbyterian Hunger Program manages this grant program and has been funding the Fox River Valley Initiative (FRVI), a protagonist in a recent win for low-income residents of Elgin, Illinois. Thanks to FRVI for sharing their story! 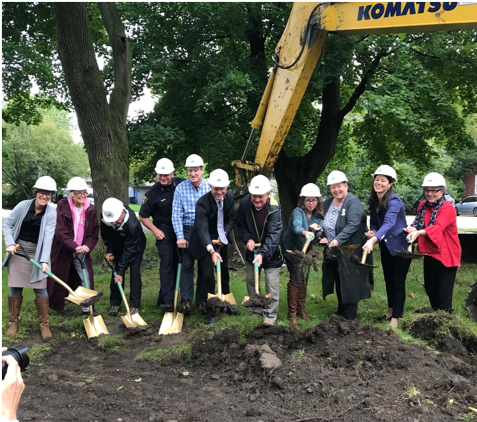 Braving the threat of serious rain, more than 100 enthusiastic supporters gathered under a tent at 1212 Larkin Avenue in Elgin on the afternoon of Friday, September 27, to celebrate the groundbreaking for a new affordable housing development. The ceremony featured several speakers who remarked on the effectiveness of a partnership between the Fox River Valley Initiative (FRVI) and Full Circle Communities, which engaged in a year of planning that led to the event.

Lindsey Haines, Vice President of Real Estate Development for Full Circle Communities, proudly noted that the developme nt will combine 12 housing units created through the historic preservation of the existing Larkin building, which has been shuttered for the past five years, with an additional 36 new living units on the surrounding grounds. Altogether, the project will be home to about 100 women, men, and children.

The development will have 10 dedicated 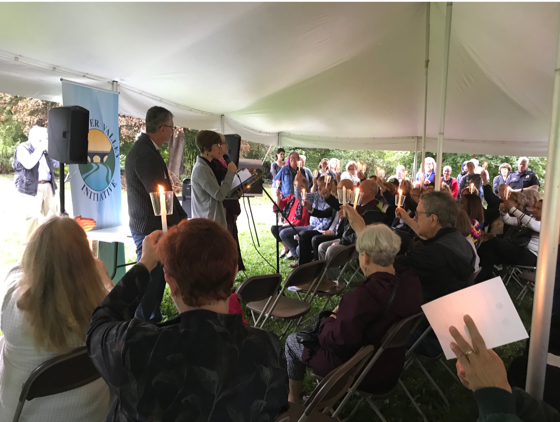 units for people with mental or physical disabilities, with onsite case management. The other 38 units will be 2-3-bedroom apartments for people living on 30-60% of the surrounding area’s medium income. Part of the case for the new development is that more people who work in the Elgin community will be able to live near where they are employed. These include library assistants, preschool teachers, maintenance workers, and those in many other professions.

Linda Hamann, a FRVI leader from the Cornerstone United Methodist Church observed, “I am so glad to see this historic site be restored to what it has done in the past– service individuals in our community who have needs.”

“We need to continue taking bold steps to rebuild our communities into places that are welcoming to everyone.”

Elgin’s Mayor Dave Kaptain expressed his appreciation to Full Circle Communities for bringing the project to Elgin. He observed, “My vision is to bring quality housing for every citizen of Elgin.” Under his leadership and with the support of FRVI, the city council had voted 8-0 in support of the project after a thorough review by the Elgin Planning Commission.

Kane County State’s Attorney Joe McMahon also spoke, recalling a meeting in Washington, DC, when he and others from the partnership met with federal officials who tried to discourage their efforts. He noted “Well, here we are – less than a year later. That takes real courage and real leadership.” He recognized the importance of the development, saying that affordable housing for working people, including some with mental challenges, leads to lower crime, fewer incarcerations, reduced homelessness, and fewer people clogging area emergency rooms.

Another FRVI Leader, the Reverend Katie Shaw Thompson from Highland Avenue Church of the Brethren in Elgin, led a blessing of 1212 Larkin. While people held 48 candles representing the promise of 48 living units, she said, “We need to continue taking bold steps to rebuild our communities into places that are welcoming to everyone.”