Make A Donation Click Here >
Home › Agroecology › More corn into our fuel tanks in the middle of a war? 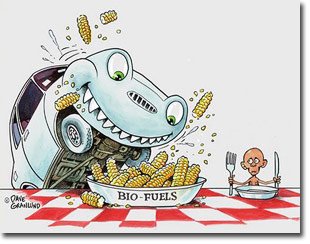 Our politicians are worried about high gas prices and inflation. Fine. But diverting arable land into biofuels as we face food crises around the globe is short-sighted and can cost many lives. Michael Grunwald, in his April 19 article titled, “Biofuels are accelerating the food crisis — and the climate crisis, too” highlights the absurdity. Here is how Grunwald describes the current moment —

“Ukraine has stopped exporting its grain because it’s at war. Russia’s customers have stopped buying its grain because it started that war. Famine is stalking East Africa, where a brutal drought has ravaged harvests — and now the region can no longer supplement its production with Ukrainian and Russian imports. Drought is also parching farms in the United States, especially in the West and the southern Plains — another contributor to higher food prices and growing food shortages.

The United Nations was warning even before the war in Europe’s breadbasket that the world faced ​“unprecedented catastrophic levels” of food insecurity, and now that global food prices have reached an all-time high, we’re facing the worst food crisis since 2008. It’s a weird time to divert more grain from the food supply to fuel tanks.”

Our president visited Iowa to announce that more corn ethanol would be mixed into our gasoline, saving consumers about 10 cents per gallon. The less visible result is that food prices will go up as a result. Grunwald explains —

The amount of corn it takes to fill an SUV with ethanol could feed a person for a year, and the U.S. and Europe could immediately replace the lost grain exports from Ukraine’s breadbasket by cutting their biofuel production in half. So it’s pretty obvious why this food crisis is a dumb time to accelerate biofuel production. In fact, a bunch of studies have confirmed that biofuel mandates were a leading driver of the 2008 food crisis, driving up prices by driving up demand for grain and vegetable oil.

While this is dumb now, it wouldn’t make sense even if the war wasn’t happening and the pollstars weren’t panicking out about inflation —

The thing is, the reasons biofuels are dumb when the world is freaking out about its food supply are the same reasons most biofuels are always dumb: Land is much more efficient at growing food than growing energy. Using land to grow fuel induces the clearing of additional land to grow food, wiping out forests and other carbon sinks we need to save the climate. And for the foreseeable future, the world should always be freaking out about its food supply.

The bottom line – in an age of climate chaos and chronic hunger – is that the best use of land is to grow food, not to produce fuel. And the more land diverted to ethanol and biodiesel, the more forests will be felled  to grow needed food — and the hotter the planet gets. This push for land also squeezes small- and medium-holder farmers off their land; the very people who grow more than half the world’s food. These farmers, on the whole, produce with far fewer emissions and a lower environmental footprint than the industrial farms growing corn, soybeans, sugar, palm and other fuel crops. When done right, agroecological farming captures carbon from the atmosphere and cools the planet.

Read Grunwald’s article for more, and help PHP support groups that are scaling out agroecology and food sovereignty to make a transition to the just and sustainable world we need!

Your gifts to One Great Hour of Sharing and the Hunger Fund make that possible. Thank you!