Presbyterians have expressed concern for those who work in the livestock industry, the treatment of animals, and the environmental impacts of meat produced in factory farm operations. This morning’s news talks about one notable state, where the meat industry has exploded over the past 15 years.

North Carolina is now home to thousands of livestock operations, from small family operations to enormous ones. This new map from EWG and the Waterkeepers Alliance allows you to see them all–yellow for poultry, purple for cattle, and pink for pigs.

I’ve clicked on one swine operation to show the interactive function of the map. This operation for example, J & W Swine Co., has 7 wastewater lagoons and discharges more than 15 million gallons of waste per year.

With 10 million pigs in NC – about 4 pigs for every human in the state – creating about ten times the waste of a person, there is a lot of waste to deal with, and some residents are not happy about it. The updates below illustrate some the challenges. See also the PC(USA)’s stance on factory farms based on last General Assembly’s resolution.

NORTH CAROLINIANS CREATE STINK OVER HOG FARMS: A federal case over the stench emanating from pig farms in North Carolina has been weaving its way through the court system for years, culminating today in what will be the start of a monthlong trial.

Rural residents in eastern North Carolina complain that the smell from industrial pig farming is a nuisance, Pro Ag’s Liz Crampton reports. The legal definition of ‘nuisance’ means the use and enjoyment of their property has been curtailed. In 2014, hundreds of residents sued Murphy-Brown, a subsidiary of the world’s largest pork company Smithfield, and a judge has split the cases into eight trial groups (more of which could be added).

Waste lagoons: Animal waste at these farms sits in open-air lagoons, which the residents say amounts to an “unflushed toilet.” The waste is sprayed onto fields as a fertilizer.

That system was developed in the 1960s and ’70s and works for North Carolina farms, the pork industry says. But residents say that the problem is more than just smell — waste drifts off from the fields and coats nearby homes, posing a health risk.

Basis of economy: Hog farming is big business in North Carolina, employing about 46,000 people. Smithfield warns that a losing verdict could imperil its future in the state. Company lawyers say residents’ complaints are overblown, and other businesses in the area — such as an Arabian horse farm and a local bed and breakfast — don’t have problems with the farms. 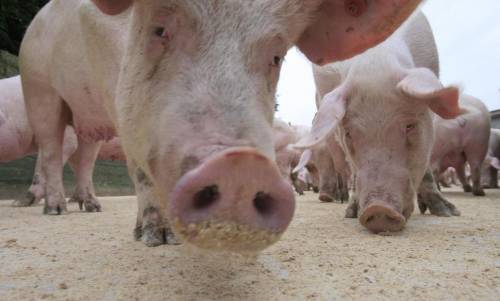