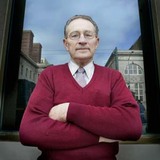 The Lesotho (know where it is? let us know in a comment) and Los Ranchos Presbytery Joining Hands partnership is looking into the role of GMOs, or genetic engineering, in their food system. Monsanto, the prime mover in GMO research and proliferation, has been active in southern Africa. For those wanting an academic piece analyzing the “Monsanto strategy,” I found a good piece by Patel, Rossett and other. It is called “Genetic Engineering in Agriculture and Corporate Engineering in Public Debate” and can be found at http://www.mindfully.org/GE/2005/Monsanto-Public-Debate1oct05.htm

For me and people around the world, the Canadian farmer Percy Schmeiser became a hero when he stood up to Monsanto. After the company’s genetically engineered (GE) seeds blew onto Schmeiser’s canola farm and contaminated his fields, the multinational sued the farmer for growing their patented seeds without permission. Monsanto can’t keep a good farmer down