The effect of mountaintop removal mining on birth defects is even stronger than the effect of a mother smoking during pregnancy.  View a fact sheet with more information on this new MTR study from the Ohio Valley Environmental Coalition.

Environmental Ministries started the Earth Care Congregations program in 2010, and since then more than 50 churches have used A Guide to Greening Presbyterian Churches to become certified as Earth Care Congregations. The goal of the program is to inspire churches to care for God’s earth in a holistic way, through integrating earth care into… Read more »
August 31, 2011 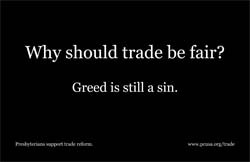 New Webpage from the Presbyterian Hunger Program The Presbyterian Hunger Program has created a new webpage with resources related to trade reform.  Trade issues and eco-justice are inextricably intertwined, and this page has great resources for Presbyterians to learn what our reformed tradition has to say about just trade.  Explore this new webpage at www.pcusa.org/trade,… Read more »
August 29, 2011
There is another new blog post on the Eco-Stewards Program blog from Eco-Steward Josh Campbell.  In the post “Rethinking Our Rivers” Josh reflects on learning about how poor environmental practices affect human health during the Eco-Stewards Program in Montana, and the eco-justice issues related to this.  Read Josh’s inspiring post, learn about eco-justice and how human health is affected by… Read more »
August 17, 2011

Rev. Craig Goodwin emailed me recently to let me know that a study guide is now available for his book Year of Plenty, which reflects on his family’s year of sustainable Christian living.  The study guide was developed by Millwood Community Presbyterian Church’s small group ministry.   Read my earlier blog post on Year of Plenty to… Read more »
August 10, 2011
Montreat Conference Center in Montreat, North Carolina is one of twenty Presbyterian camp and conference centers in the country to have received the 2011 Green Leaf Seal from Environmental Ministries and the Presbyterian Church Camp and Conference Association.  Last week Montreat celebrated its Green Leaf Seal recognition and the completion of a solar hot water… Read more »
August 9, 2011
Glenshaw Presbyterian Church (GPC) in Glenshaw, Pennsylvania was certified as an Earth Care Congregation in June 2011. The Pittsburgh Tribune-Review ran a story about the church’s environmental stewardship efforts and Earth Care Congregations certification on August 4. Read the article. I also received the update below from Beth Egan, a church member and participant in the… Read more »
August 8, 2011
Patricia K. Townsend, a member of North Presbyterian Church in Williamsville, NY and a board member for New York Interfaith Power and Light (NYIPL), sent the following story about the path to installing solar power at her church. The article originally appeared in the NYIPL e-newsletter and the Presbytery of Western New York e-newsletter.  Thanks… Read more »
August 5, 2011
There is another new blog post on the Eco-Stewards Program blog from Eco-Steward Dave Grace, who just finished his summer internship at Greenwood Farm in Hardin, Montana this summer. In the post Dave reflects on his summer experience and his faith journey. Read Dave’s blog post. The Eco-Stewards Program for young adults, which took place in Montana in June, focused on connecting faith and… Read more »
August 5, 2011
New York Church Works for Holistic Environmental Stewardship Members of the Environmental Ministries Action network from Huguenot Memorial Church in Pelham, NY sent the following update on environmental stewardship in their congregation.  The information is excerpted from a church newsletter article from winter 2011 written by Elders Elysa Peters and Eric Smith.  At Huguenot Church,… Read more »