It’s so easy to center ourselves and our own needs, in ways that cause us miss how God and the universe are working together to make divine connections. As I traveled to COP27 earlier this week, I felt a bit disgruntled to learn that the airline had switched my seat and I’d be spending my next five and half hours in a middle seat on a budget airline.

But the universe was at work.

I found myself next to a friendly gentleman, who with his newspaper and constant misplacing of his glasses had a bit of a absent minded professor vibe about him. While I settled in to listen to my book, he struck up conversation.

By the end of our time together I’d learned that he was a film producer and was invited to the first screening of his film being held a few days later at the Civil Society Climate Justice Hub, a collaborative space for global civil society climate justice actors to connect, reenergize, reshape and reclaim the narratives and solutions to the climate crisis.

This space proved to be one of the most welcoming and energizing spaces I sat in this week. Even the the atmosphere of the space itself felt free, creative and peaceful.

And I am better for having heard the voices of the amaMpondo and the reminder of the sacredness of our oceans.

Saving the Wild Coast: Turning the Tide on An Oil Leviathan

“I belong to this land. It is not the other way around.”
– Sinegugu Zukulu, Sustaining the Wild Coast

The film tells the story of the compelling story of a court battle between Shell Oil Company and the amaMpondo peoples of South Africa.

In October 2021, Shell announced it would commence with seismic surveys off the Wild Coast of South Africa in December 2021. The assessment survey  would cover an area of about 6,011 square kilometres, located between Port St Johns and Morgan Bay.

But for the Amadiba community on the coast, the Indian Ocean isn’t just an economic resource which provides fishers with livelihoods. It’s also spiritual.

In 2018 the Amadiba community on the Wild Coast succeeded in a 20-year battle to bar opencast mining of the titanium-rich red sands of the Xolobeni people. That farmer-focused community struggle, led by the Amadiba Crisis Committee, managed to build an international network of support.

‘For over two decades, the coastal Amadiba community has fought against opencast mining on our land,’ said the Committee in a public statement. ‘Now we also must fight against mining of the ocean. Indigenous people along the whole coast of Africa must have the right to say no to projects that threatens their livelihood: the right to free prior and informed consent.’

Sinegugu Zukulu, who lives at Baleni Village in the Amadiba Traditional Community and runs not-for-profit Sustaining the Wild Coast said that “Unlike other coastal stretches in South Africa, indigenous people have maintained continuous possession of this land despite waves of colonial and apartheid aggression. This is no accident. Our ancestors’ blood was spilt protecting our land and sea. We now feel a sense of duty to protect our land and sea for future generations, as well as for the benefit of the planet.”

Zuklulu and other campaigners  argued that local communities were not properly consulted. With the claim that the seismic surveys would scare off fish and any future oil spill would devastate the region’s fishing and tourism industries and cause spiritual damage,  they took Shell to court to halt the survey. 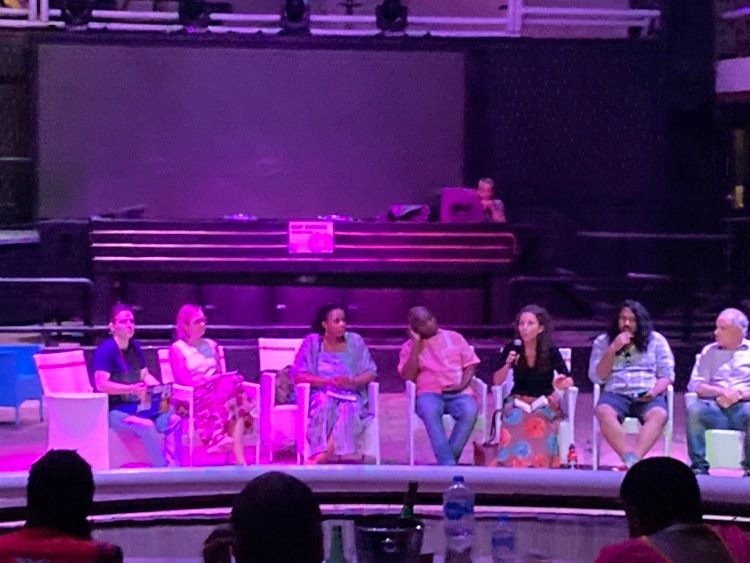 Speakers at a panel post film screening at COP27, including Sinegugu Zukulu, an Amadiba environmental activist.

During the panel held after the film screening Zukulu shared that for him part of what this victory meant was that the world is beginning to listen to the warnings that the impacts of climate change are immediate and dire.

Pooven Moodley, a Human Rights Lawyer and social justice activist from South Africa, who was one of the lawyers for the case, told the audience that the focus on profit making by “civilizations” was making the planet unlivable. “This case has shown again that indigenous communities around the world are our last line of defense.”

Other panelists reminded the audience that the combination of indigenous wisdom, activism, and litigation are powerful tools in safeguarding human rights and bringing about climate justice.