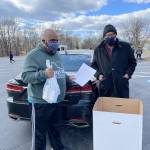 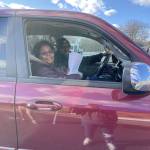 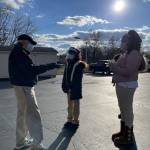 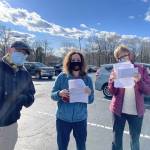 While we work on long-term solutions to systemic injustices, we also are called to stay active in our local communities. On January 18, 2021 Rev. Frank Dew and other members of Salem presbytery worked with partners to raise awareness about hunger through a food drive and advocacy, as one of many ways to honor the life and legacy of Rev. Dr. Martin Luther King Jr. Pictured at St. James Presbyterian Church in Greensboro, NC. Photos shared by Frank Dew.

We celebrate the life of Rev. Dr. Martin Luther King Jr. each January at the anniversary of his birthday. He taught and wrote about the interlocking systems of racism, classism, and militarism in our country while calling us to be courageous, faithful and non-violent resisters to these forces and systems. While a lot of people use inspiring quotations from him decades after his assassination, we need to be cognizant that what he encouraged was considered dangerous to those who wield power. He challenged systemic injustices in ways that some people would not support if he were alive and active in organizing for justice today.

Dr. King’s writings are still relevant as we continue to witness gross evidence of white supremacy, racism, elitism, militarism and rampant societal injustice on multiple levels. He also recognized the unfair working conditions of environmental contamination and his concern for the safety and health of workers was connected to a clean and healthy world. He saw the intersections between environmental, economic, social, and racial injustices.

We are still suffering from regular police violence against Black Americans and white supremacists have been given safe haven by some at the top levels of our government (from the U.S. President failing to condemn the racist violence in Charlottesville in 2017 to just recently hearing evidence that elected officials helped inflame white supremacists to invade the Capitol a few weeks ago).

Hunger disproportionately affects people of color in America. Black, Indigenous, and People of Color communities also have been most impacted by COVID and are not receiving vaccines at the rate of White Americans.[1] While we as a denomination have launched a Matthew 25 vision to dismantle structural racism and eradicate system poverty, PC(USA) is still predominantly white and has our own history of upholding systems of white privilege and being inculcated by white supremacy. We are called to confess and repent and then to demonstrate God’s grace and transformation by action, activism and advocacy for justice.

We now are on the verge of moving into February, marked as Black History Month. Various PC(USA) programs will be using social media platforms, sharing stories, and offering learning opportunities about Black history, the lives and contributions of Black Presbyterians, and ways to be church in a way that affirms Black Lives Matter.

As people who care about root causes of hunger, we recognize that racism and white supremacy are root causes of hunger. In addition to the disproportionate impact of hunger on people of color communities, we know there is also clear evidence of a systemic lack of access to healthy food, farmland, and agricultural support in communities of color.[2] The Presbyterian Hunger Program has gratefully learned alongside impacted communities about the need for reparations, land access, and the need for food justice.

All people should be able to have the life abundant that Jesus came to bring. Life abundant includes freedom from hunger and oppression of all types. When we approach one issue of injustice (such as hunger), we quickly discover that we are working on unraveling multiple systems of injustice.

King in his time launched a Poor People’s Campaign. There has been for a few years now a new Poor People’s Campaign led by Rev. Dr. William J. Barber II and Rev. Dr. Liz Theoharris. Across the country and on state levels, this movement addresses the interlocking injustices of hunger, health and poverty, racism, environmental destruction, and militarism. This campaign calls for re-awakening a national morality that uplifts moral commitments from the Constitution of the United States. PC(USA) has affirmed and been a part of the Poor People’s Campaign and it is one way we can answer the call to reflect Jesus’ teachings in Matthew 25.

This Monday will be the beginning of a new series of “Moral Monday” events. Whether you have been a part of these before or whether this is all new, you are invited to join.

February 1 is the anniversary of the launch of the sit-in movement in Greensboro, NC in 1960. Democrats, Republicans and Independents are invited together to consider how we might continue to lift up moral principles and urge elected representatives to pass bold legislation to relieve the suffering of people. The Poor People’s Campaign has shared with the new Administration a set of 14 priorities to heal the nation which include environmental, economic, social and racial justice policy demands.[3]

We are invited to “tune in for an important teach-in on the current political moment, a roll-out of the 100-day action plan and for a massive call-in action targeting Schumer and McConnell, demanding immediate action on Covid relief.”

[2]https://waysandmeans.house.gov/sites/democrats.waysandmeans.house.gov/files/documents/WMD%20Health%20and%20Economic%20Equity%20Vision_REPORT.pdf “U.S. policies and systemic inequities have over time restricted the rights and ability of Black Americans to acquire or retain land for farming; Black farmers currently make up less than two percent of all U.S. farmers. Furthermore, policies and practices have been documented that further restricted the ability of Black farmers to access the government support that other farmers receive.”

The work of the Presbyterian Hunger Program is possible thanks to gifts to One Great Hour of Sharing! Thank you!