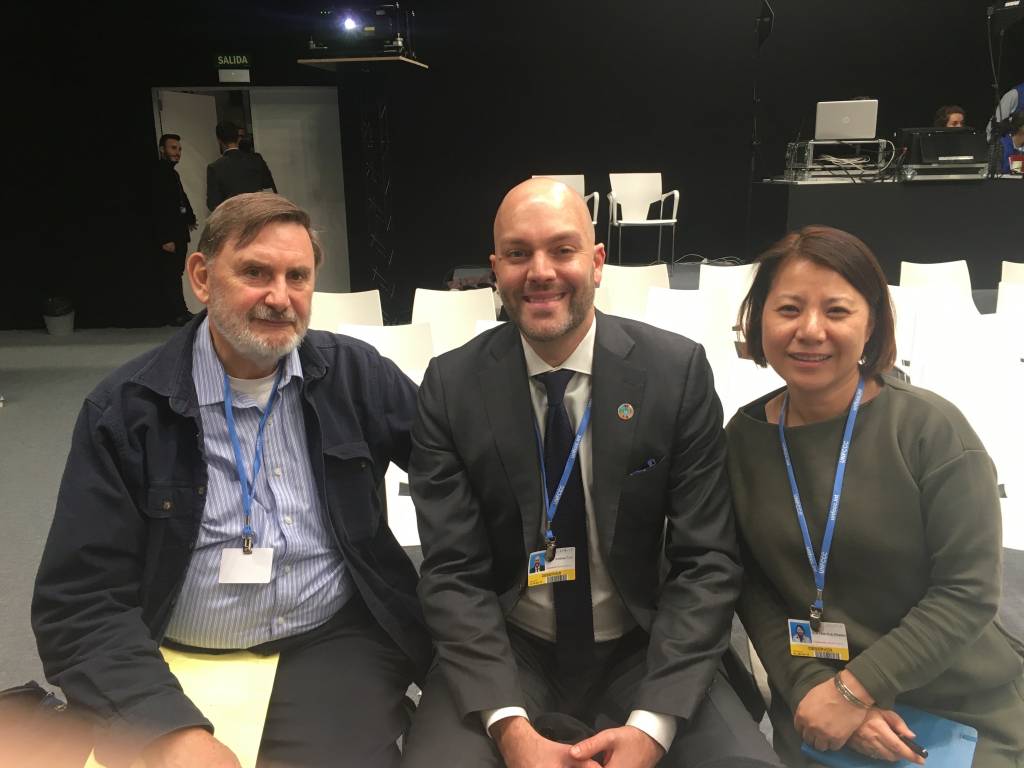 INTRODUCTION: The annual United Nations meeting on climate change (known as the Conference of the Parties that have signed the international convention on climate change that was signed at the Rio Earth Summit in 1992, and entered into force in 1994) met in Madrid, Spain. As this was the 25th meeting, the event is commonly known as COP25.

In an almost miraculous achievement, delegations representing 197 countries, international agencies, civil society organizations, and others were able to make last minute arrangements to make the move from Santiago to Madrid, and COP25 convened on time. All told, over 26,700 people attended COP25, including more than 13,600 government delegates and around 10,000 observers. In addition, around 3,000 reporters with press credentials were there at some point during the two weeks of COP25.

Many of the faith-based organizations sending members as observers were able to make the switch to Madrid. The major exception involved South and Central American groups, primarily connected to the World Student Christian Federation, who had planned a major presence in Santiago, but could not transfer the prepaid hotel rooms and air tickets. They were able to hold meetings in support of both climate change action and in solidarity with Chileans protesting economic inequality.

PURPOSE OF COP25: The main tasks for COP25 were to iron out the incomplete details on a variety of issues in preparation for the first “stock take” in 2020 on the adequacy of the nationally determined contributions (NDC’s) toward mitigation, adaptation and implementation of commitments to keep global warming to well below 2 degrees Celsius, and strive for 1.5 degrees. This was the agreement reached in the Paris Accord adopted in 2015.

The reality check for COP25 involves the recent scientific studies indicating that the current NDC’s fall far short of what is needed to meet the Paris goal, and that time is running out to reduce greenhouse gas emissions sufficiently.  As a result, the first “stock take” is viewed as the time for significantly “enhanced ambition” rather than mere tinkering with commitments.

Implementation details on many elements of the Paris Accord were agreed to in 2018 at COP24 in Katowice, Poland. However, other components were pushed to 2019, particularly the mechanisms around “Article 6” that involve market and non-market strategies for nations and non-state actors. Another key area needing additional work involved the Warsaw International Mechanism on Loss and Damage which involves financial support for adaptation efforts by  vulnerable countries.

POSITIVE RESULTS: There were some positive results including adopting a second five-year implementation plan for gender issues as mandated by COP20 in Lima. The UN process was committed advancing “women’s full, equal and meaningful participation” and promotion of “gender-responsive climate policy and the mainstreaming of a gender perspective.” While negotiators struggled with proposals to include human rights, just transition and indigenous issues in the second five-year plan, the resulting text included sufficient language for a number of NGO’s to hail the plan.

The European Union stepped forward by announcing that prior to COP26, scheduled for November 2020, it would declare net zero greenhouse gas emissions by 2050 as its ambition commitment. The EU is also considering an enhanced commitment for 2030 to reduce emissions from the current goal of 40% below 1990 levels to “at least 50% and towards 55%.”

Despite the lack of progress by the diplomats, the United Nations Environment Program (UNEP) noted reasons for optimism: public support for strong climate policies globally, clear scientific analysis supported by more people, and industry (I would add sub-national governments) mobilizing to address the climate crisis.

KPMG, an advisory service for the corporate and financial sectors, summarized key outcomes of COP25 this way:

As a result, KPMG urged the business sector to recognize:

In addition, the Koronivia joint work on agriculture became slightly more prominent. The three year process will wrap up its work at COP26 in November. The work on adapting agriculture to climate change is focus for developing nations, particularly in Africa. As usual, the issue of financing agriculture adaptation pits developing and developed countries against each other. However, there will be focused work to develop recommendations for COP26.

Mr. Fohr was a presenter on the opening panel of the “We Are Still In” coalition, a civil society  organization supporting the Paris Accord. He outlined the PCUSA’s work on faith-based investing and climate change.  Rev. Somplatsky-Jarman participated on a panel of investors that included representatives of the California State Teachers Retirement System and the California Public Employees Retirement System. The theme was how major pension funds are conforming their investments to achieve the goals of the Paris Accord.

The faith-based representatives from Christian churches and organizations held several events and meetings during COP25. A coordination meeting was held at the beginning of each week. In addition, a daily morning check-in and evening evaluation meeting was coordinated by the ACTAlliance reference group on climate justice.

On Sunday, December 8, 2019, a COP25 Ecumenical Service and Dialogue on Climate Justice was held at the Evangelical Church of Spain in Madrid. The pastor of this Reformed church had been an ecumenical delegate to a PCUSA General Assembly. Following the service, ecumenical representatives gathered for a review of the first week, and strategizing for the second week.

On December 1, 2019, there was a COP25 Interfaith Dialogue on Hope, Action and Prayer. Again hosted by a congregation of the Evangelical Church of Spain, the event helped set the tone of interfaith cooperation at the COP.

There were several Side Events which involved faith-based groups collaborating with each other and with secular organizations.

The World Council of Churches partnered with the Friends World Committee for Consultation, the Brahma Kumaris World Spiritual University, Franciscans International, and Quaker Earthcare Witness on the topic of Inspiring Courage to Act and Adapt in a Climate Emergency. Panelists explored “Implementing the Paris Agreement in solidarity, compassion, and with policies that respect human rights and Indigenous Peoples rights.”

Christian Aid joined with Oil Change International and Earthworks to discuss “charting a path away from oil and gas and towards a more sustainable 1.5C future.”

The Dharma Drum Mountain Buddhist Association joined the Global Peace Initiative of Women and the Reevaluation Foundation for a discussion of “Reclaiming A Sacred Earth: Women and Youth Fostering Restoration and Healing.”

World Vision International, Plan International and Save the Children International focused on “A climate just future for all children.” The discussion advocated for placing the rights of children at the center of action on climate change.

Finally, an Interfaith Statement was written and delivered during a COP25 plenary as in the past. The statement highlighted the need for a just transition and increased ambition.

Currently, the United Nations system includes faith-based organizations in the broader category of “environmental organizations.” This follows from the sectors of civil society identified in Agenda 21 adopted at the Earth Summit in 1992. The distinctive contribution of the faith-based community to addressing climate change has been recognized by the UN from the beginning. As a result, faith-based organizations have sponsored Side Events, had display booths, and delivered plenary interventions all along. The IPCC has formed a special liaison group with the faith-based community for coordination and input. However, this is not seen as adequate by some faith-based individuals and groups who believe a push for “official” recognition should be made.

INTERACTION WITH THE U.S. GOVERNMENT

Unlike previous COP’s, the U.S. State Department did not sponsor any Side Events, or have a pavilion for other programming and briefings. There was no literature for distribution. There was no concrete evidence of behind the scenes positive contributions either. In fact, unlike the previous years with the current administration, the U.S. government sought to separate itself from any obligations including under the original Framework Convention on Climate Change as well as from the Paris Agreement.

The U.S. was not alone in obstructing progress. While fires consumed Australia, its government doubled down on fossil fuels. Saudi Arabia and other nations sought special consideration. Even Brazil, Uruguay and Argentina sought to alter formulas to determine carbon dioxide equivalents for methane in order to protect their cattle raising sectors. Brazil (under the new rightist government), India and China were chastised by the Alliance of Small Island States for their role in blocking progress on Article 6.

However, during the first week a sizeable delegation of several Congressional Representatives and one Senator (Sheldon Whitehouse of Rhode Island) came for a couple of days. Speaker of the House Nancy Pelosi headed up the delegation. The delegation was accompanied by key staff and assisted by State Department personnel from the U.S. Embassy in Madrid.

The delegation held a press conference where, despite tight security, some members of faith-based organizations were able to attend. After some negotiation, the delegation met with some faith-based observers, primarily from D.C. offices. Over the two days, contact was made with delegation members and staff, particularly with Representative Kathy Castor, a Presbyterian from Tampa, Florida, and Dr. Ana Unruh Cohen, Staff Director of the House Select Committee on the Climate Committee. Representative Castor introduced herself by saying she attends a Presbyterian church in Tampa. All members of the delegation said they would like to hear more from their faith-based constituents.

During the second week, Congressional staff attended, and met with U.S. civil society representatives. They were uniformly supportive of action on climate change, and were clear about the road blocks to environmental standards posed by the current administration. Particularly insightful was Mr. Dan Dudis, Environmental Counsel for Sen. Sheldon Whitehouse.

Several Side Events focused on gender and indigenous issues and on the Amazon rainforest. They were very informative, and indicated the amount of progress that has been made in incorporating such concerns into the COP process. The Pacific Island nations again had a pavilion with numerous presentations and cultural events. A special focus on the Pacific is underway in the World Council of Churches. As a result, the next meeting of the World Council of Churches Climate Change Steering Committee will be held in Fiji in late April 2020.