In the Christian church, the covenant between God and God’s people is a reminder that ALL life belongs to God’s community, and that God’s promise to the earth’s inhabitants is for all time, not just right here, right now. In this light, as Jim Antal writes in his book Climate Church, Climate World, the universally recognized Golden Rule needs to be re-interpreted to emphasize the future tense that is implied: the love and care with which we are to treat others is for all generations to come, for eternity, just as God’s covenant is for eternity. In addition, we are reminded that this covenant – and the Golden Rule — is extended to all the earth, not just humans (Gen. 9:13).

The Golden Rule appears many times in various forms throughout the Bible. God’s desire for us to live in community with one another becomes clear. If we accept that God calls us to act in community and fellowship with each other, then we must think about how to respond. For example, when one senses a calling to respond to the climate crisis, it is helpful to think about how that response can be expressed in community.

In the Presbytery of East Tennessee (PET), a group of people from multiple congregations, calling themselves the Climate and Energy Stewardship (CES) team, has been exploring ways to respond to the climate crisis in their community. This committee created a mechanism by which churches and church facilities throughout the presbytery can implement energy efficiency goals that they otherwise might not be able to afford. The Carbon Footprint Fund of the PET receives voluntary donations which are then granted to fund specific projects. A request for proposals is put out, interested facilities submit a simple application, and the CES team awards funds based on feasibility and carbon footprint reduction potential. 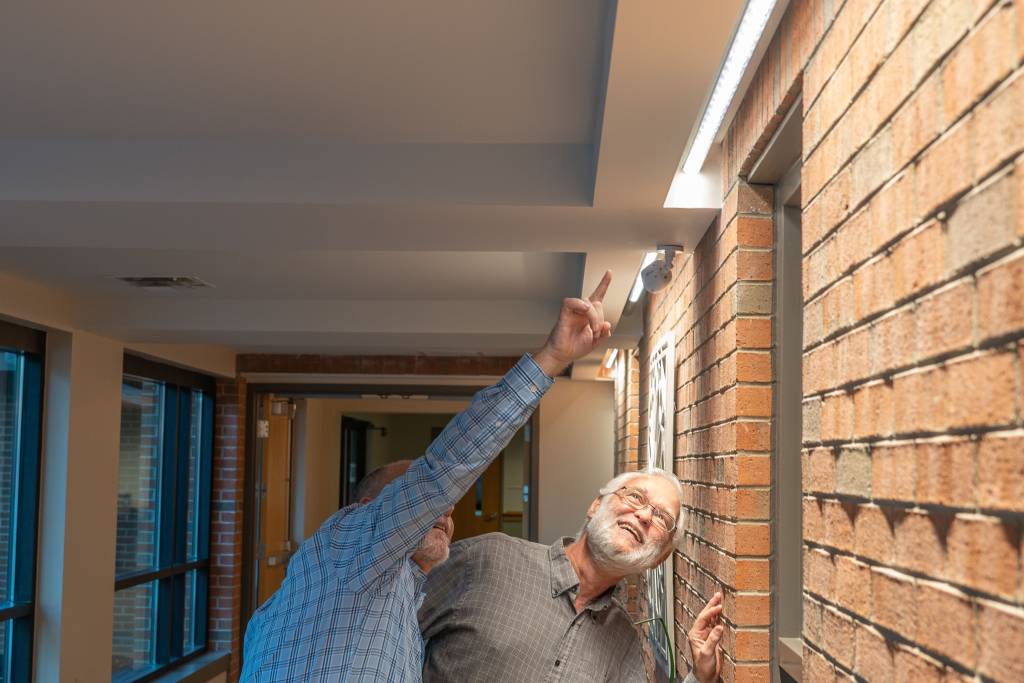 Scott McKinney of Farragut Presbyterian Church shows Dan Terpstra of the Climate & Energy Stewardship Team the LED wall wash lighting that was funded through a Carbon Footprint Fund grant as part of a larger renovation project at the church.

Donations to this fund of any size are appreciated, but they can be calculated to offset the carbon footprint of an individual, group, church or other organization. CES found that the Cool Climate website is great for help figuring out your carbon footprint, as well as tools, resources, and lots of great information. A carbon footprint is a measure of greenhouse gas emissions (primarily CO2) released into the atmosphere that result from human activities. We all contribute to carbon emissions in our daily lives when we use fossil fuel-powered energy—e.g. driving cars, heating or cooling our homes, turning on the lights. We can reduce emissions through our own actions aimed at reducing energy consumption, or by contributing to funds that help others use energy more efficiently, thus effectively offsetting our own carbon footprint.

So far, projects at six churches and one church-related facility within the Presbytery of East Tennessee have been funded, all of them involving lighting upgrades to LED lamps and fixtures. Other qualifying projects may include installing programmable thermostats, weather stripping for doors and windows, or matching funds for appliance efficiency or water heater upgrades. Initial projects have started small (around $300 to $500), but as awareness and contributions continue to grow, so does the level of funding and the size of the project. Converting from fluorescent to LED lights can save roughly 50% or more in electricity costs, and provide a payback often in less than two years. At John Knox Center, the presbytery’s retreat and conference center, the lighting in the outdoor pavilion was replaced with a system of LED lights and sensors that will automatically turn off or dim them based on occupancy and outside light. 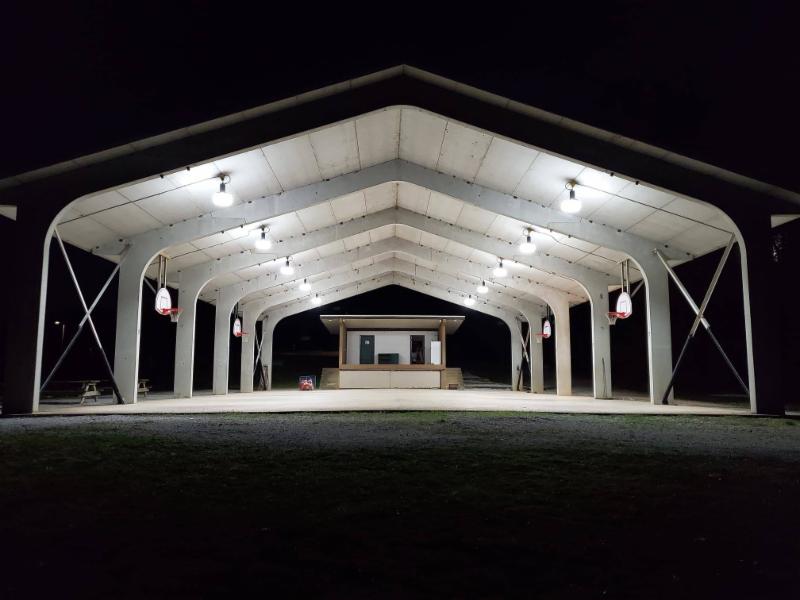 The outdoor pavilion at John Knox Center was upgraded to LED floodlights with timers, occupancy sensors and daylight dimmers to precisely match the lighting needs to the usage, resulting in an 80% energy saving!

The climate crisis, like other injustices throughout history, has provided fertile ground for people of faith to practice their calling toward a more just world. From responding to emergencies such as floods, wildfires, and droughts to appealing to government leaders and legislative bodies to heed the scientific warnings about the effects of carbon emissions, the conviction that we must help our neighbors around the world to recover from climate-linked disasters, and reverse lifestyles that make them more likely, is an increasingly strong pull. Christians who are looking for ways to be good stewards of Creation, and also of their financial resources, may find that funding local energy efficiency projects to lower carbon emissions is an effective way to do this and at the same time, express gratitude for God’s abundant gifts.