I am grateful to Presbyterian colleagues who are keeping me (and all of us) informed of the important and sacred journeys of brothers and sisters working to protect God’s creation this week, as the Lummi Nation sponsors a Totem Pole Journey and the Standing Rock Sioux are protesting and praying around the Dakota Access Pipeline.

While waiting for more information and keeping these vigils in prayers, I lift up these pieces shared by Presbyterians for Earth Care members Holly Hallman, Gary Payton and Paul Henschen. Also, scroll to the bottom for news stories on Sept 1st and next Thurs Sept 9th.

Holly Hallman at the Seattle ceremony with the Totem Pole Journey 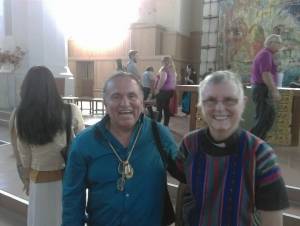 Words from Gary Payton to the Totem Pole Journey in Sandpoint, August 29, 2016

Good morning! It is a privilege to be present today with the men and women of the Lummi Nation as they stop along their 5,000 mile totem pole journey.

To the Lummi present with us today, members of the House of Tears Carvers and those who travel with you, you honor us with your presence and with your carving. For your gifts, we say thank you.

It is a privilege to talk about the faith community’s response to the challenges we face together.

And, on this Sunday morning, it is good to remember.

It is good to remember that we gather under the heights of the Cathedral of the Blue Dome, a sky which covers us and we hope will cover all who come after us.

It is good to remember we gather by the waters first peopled by the Kalispell – a people who lived close to the earth and lived their lives based on the abundance of the water and the land. They fished, they picked berries, they dug roots, they sustained themselves with caribou, and deer, and bear. They did not live in a time of climate change accelerated and threatened by the extraction and burning of fossil fuel.

And, though we in Sandpoint are hundreds of miles from the ancestral home of Lummi on the shore of the Salish Sea, it is good to remember we share much in common. We share the threat presented by the movement of coal trains from the Power River Basin and by the accelerated shipment of Bakken crude oil and Albertan tar sands. We both, like brothers and sisters in so many communities on this totem pole journey are part of the “Thin Green Line” which is holding fast against fossil fuel industry.

Everyone gathered here today recognizes that climate change is the great moral and spiritual challenge of our time. And, we know that challenge is caused by our reckless exploitation and consumption of fossil fuels that destroy our atmosphere and oceans.

It is right then that faith community members stand in solidarity with the Lummi Nation on coal and oil issues and with other tribes and communities which seek to protect our good creation. Tribal leaders, the faith community, and environmental organizations like Idaho Conservation League and Lake Pend Oreille Wwaterkeeper stand together in so many places.

In our own community of Sandpoint, we lift up the role of Pastor Andy Kennaly of First Presbyterian Church who has boldly spoken out opposing the Longview coal terminal and the Tesoro Savage oil terminal, both on the Columbia Gorge. Andy has shared his concerns about risks to our environment, the health of our children, and to God’s creation at large.

Across our region, we have heard the voices of religious leaders in support of the treaty rights of the Lummi and the threat of more fossil fuel projects. Leaders of the Presbyterian Church, the Evangelical Lutheran Church in America, the Episcopal Church, the United Methodist Church, the Disciples of Christ, the American Baptists, and the Sisters of Providence. They have declared, “We stand in solidarity with our Native neighbors to safeguard the traditional lands, waters, and sacred sites…from destruction.”

Last December, I attended the UN Conference on Climate Change in Paris. It was my honor to observe and report on the historic gathering that produced the Paris Agreement…an ambitious plan to move the nations of the world to keep global temperature increase below 2 degrees C or 3.6 degrees F.

In Paris, I heard the voices of the Indigenous Peoples Movement from around the world…Tribal leaders from the US, First Nations people from Canada, leaders from Central America and Asia. There was a keen awareness that indigenous peoples are both the holders of ancient wisdom on how to live gently on the land and that they are the most at risk to the onrush of climate disruption and the might of the fossil fuel industry.

Paris always was witness to the extraordinary cooperation of faith leaders…Christians, Jews, Muslims, Buddhist, Baha’is and more who pressured their negotiators to stand for the creation and for our future generations. (Pope Francis, the Dalai Lama, et al.)

The Paris Agreement is not a perfect document…but the gathering was an important step to find the pathways toward a low carbon existence and reduced reliance on fossil fuels.

So, today on this Sunday morning under the roof of the Cathedral of the Blue Dome, we stand amidst warriors. Last May, the Lummi achieved a victory for all of us on the rail line from the Powder River Basin in Montana and Wyoming to the proposed export terminal at Cherry Point. And, today they continue to carry the message of resistance to more Bakken crude and Albertan tar sands trains placing us, future generations, and all of creation in danger. My friends, these warriors are taking that message from British Columbia, across Washington, to North Idaho, to Montana, to Alberta, to South and North Dakota, and on to Manitoba.

So, Jewel Praying Wolf James and all who accompany you on this totem pole journey, please know that we hold you in our prayers.

We pray from your safety as you carry your critical message across states and provinces.

We pray for courage as you face challenges of the unknown and resistance from those who reject your message.

And, we pray that the Creator grant you great wisdom as you communicate, as you tell your story, a story which can move us as a society from the path of consumption we are on, to a new path where we all walk more lightly on this good earth.

Blessings this day. Thank you. 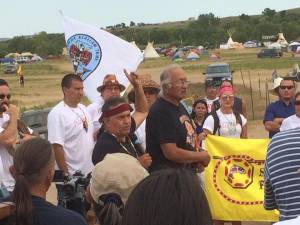 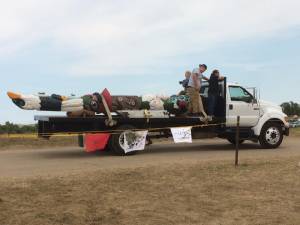 Presbyterians for Earth Care of the Presbytery of the Northern Plains via Paul and his van delivered 40 gallons of water and apples and granola bars when visiting Standing Rock at Cannonball River.

Thursday, Sep 9 is expected to be the date when the federal judge will rule on the injunction re the pipeline.