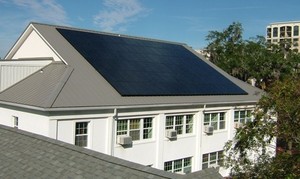 I have been serving as pastor of First Presbyterian Church of Tallahassee for almost 30 years.  Throughout my pastorate our congregation has been deeply engaged in environmental stewardship.  In 2006 our Session responded to the General Assembly’s call to become a “carbon neutral” congregation.  We have accomplished this goal through the generosity and dedication of our members.

In order to accomplish our goal we conducted a capital campaign and made major changes in our historic sanctuary and other buildings.  A central feature of our transition to carbon neutrality is the 25.6 kilowatt solar voltaic generating plant we installed on our Education Building.   Our “Light from Light” Campaign produced $900,000 in gifts from our modest-sized congregation of 360 active members.

We were advised that we could not raise that kind of money without several “major gifts.”  The advisors were wrong.  We accomplished our goal through the sacrificial giving of our members, most of whom are not particularly wealthy.

After prayerful study of fossil fuel divestment, our session not only endorsed the Overture which has been referred to MRTI, but also decided that we could not ask one Council of the church to do what we ourselves were not willing to do.  Working with the Presbyterian Foundation, we have now withdrawn First Presbyterian’s endowment funds from major fossil fuel companies.  We are extremely grateful to the Presbyterian Foundation for working with us to align our session’s investments with our moral and theological principles.

As a resident of Florida, I am keenly aware of accelerating pace of sea-level rise, the increase of the ferocity of storms, and other results of climate change.  As a Christian, I am even more concerned about the disproportionate impact of climate change on the poorest populations of the globe.

My own experience of Presbyterians is that, after they have studied their Bibles and the scientific facts, they are less concerned about their investments bringing in a large return than they are in investing in those companies which are not major players in the earth’s degradation.

Our session weighed its fiduciary responsibility over against its moral responsibility to do what is good for God’s creation.  Frankly, it wasn’t a hard decision.  Fossil fuel divestment received the unanimous consent of the elders on our session.

Our session has decided that the earth can no longer wait for the church to take a more public and courageous witness.  It is more than time for our denomination to join the growing number of universities, local governments, and communities of faith who have joined the divestment movement.