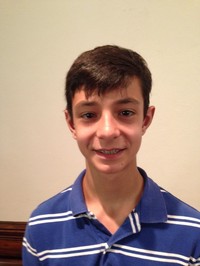 Noah Wilding is a rising sophomore at Trinity High School who is fully committed to ending climate change.  He is operating a totally green lawn care business.  He has a solar panel for charging his electric mower, trimmer, and weedwacker, and he rides his bike to his mowing jobs, pulling his equipment in a cart behind him. Bill Young is a retired research scientist and is a volunteer in the PC(USA) Environmental Ministries office. Both Bill and Noah are members of the Earth Care Team at their home congregation, Crescent Hill Presbyterian Church in Louisville, Kentucky. CHPC is one of PC(USA)’s certified Earth Care Congregations. Bill and Noah recently talked about Noah’s lawn care business at Noah’s home. 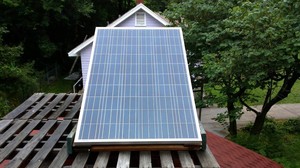 Bill:  When did you first become concerned about climate change?

Noah: I first got started in sixth grade. I was just scared for the future and decided to do something about it.  I’ve learned everything from Wikipedia, and YouTube.  Now I’m learning trigonometry from Kahn Academy.  I need that now because I’m doing MIT open courseware online and learning about circuit design for electronics.  I started this because there were no cheap options for solar so I thought I would because nobody else was going to do it.

Bill:  What do you expect to be doing, let’s say in three years?

Noah:  I’d like to be an electrical engineer, but the only thing I’m worried about is ending climate change.  So whatever way is the best way that’s what I’ll end up doing.

Bill: Is there anyone in the climate change field you admire?

Noah: I definitely admire Tesla and Elon Musk because that guy’s awesome.  He basically broke into an all gas car market and sold more SUV’s I think I heard than Mercedes.  It’s just amazing what he’s done.  He’s definitely a role model.

Bill: How do you hope to end climate change?

Noah: One market that we haven’t gotten into is making solar landscape or agricultural equipment. 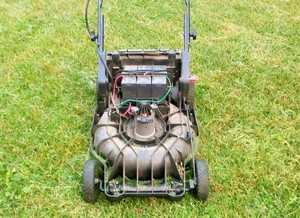 This is an old Black and Decker that was salvaged and built into one mean-green grass mowing machine! As with the other products it is built with high grade batteries and a high output mower.

Bill: What kind of world do you visualize in the future?

Noah: I definitely don’t think we’re going to end climate change in my lifetime.  I’m just going to try to get it started.  What I can picture I guess is the only way we’re going to be able to produce enough electricity to power the whole world is solar.  We’re going to have to put solar panels on top of every roof.  We really don’t need solar farms if we just utilize our roof space that’s all we need.

Bill:  The price of solar panels has come down drastically, but contractors still charge lots for installation.

Noah: Another thing Elon Musk is doing is that he’s putting solar panels in for free and you pay the Solar City only what your electric bill was.

Bill:  Is your concern about climate change related to your faith?

Noah:  You can look at it from any perspective, theological or scientific, we’re desecrating God’s world.

Bill: How did you figure out how to raise money to buy your solar panel?

Noah:  We have a two-acre yard, so my dad paid me to cut it with a push mower for a summer.  With that money I bought the panel plus the necessary hardware and an electric mower.

Bill: Why did you start your amazing green lawn care service?

Noah: No one had an electric mower business so there was no reason not to start it.  Currently I have nine customers. 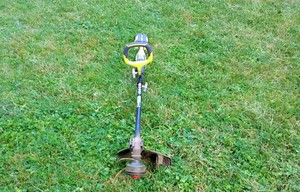 Powered by a huge lithium ferrophosphate battery pack, this trimmer has more power and run time than similar trimmers.

To read more about Noah and his business go to Facebook to Green Lawn Services Louisville Kentucky.