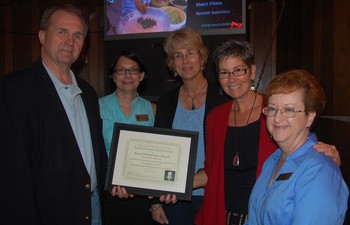 Second Presbyterian Church in Little Rock, AR has been ministering with special attention to God’s creation since the 80s. The first incarnation of their efforts was a group called SPEC (Second Presbyterian Environmental Council) and this group introduced recycling, stopped Styrofoam products at church coffee and meal times, and adopted two miles of highway to keep free from litter.

After a period of rest and then feeling called to start up efforts again, the Environmental Stewardship Team at Second Presbyterian was born and expanded recycling to include paper, cardboard, plastics and steel cans, electronics such as computers and cell phones, a recycling bin in every classroom, and to encourage all the groups that meet at the church to also follow recycling and waste reduction practices. Meanwhile, throughout the church, low-flow toilets, motion sensor lights, and energy efficient (CFL) light bulbs have been installed. Water use was assessed, resulting in the repair of dripping faucets and efforts made to appropriately water lawns and landscaped areas.  In addition, “green tips” are provided for members in the church newsletters.

Five years ago the church became one of the denomination’s 140 certified Earth Care Congregations.  The congregation has offered leadership, support and organizing to interfaith gatherings, such as a recent GreenFaith conference on earth care, an Interfaith Power and Light gathering on energy use that was hosted by a local Episcopal church, and a third conference recently at the Unitarian church about Christianity and Science as related to care of creation. The members of the Environmental Stewardship Team also played a significant role in hosting the national Presbyterians for Earth Care conference in October 2013 at Ferncliff Camp and Conference Center. 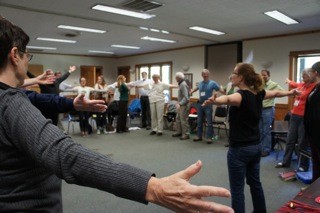 At Ferncliff, members of the Environmental Stewardship Team and others also helped to sponsor the dedication of the Eco-Center this past fall. This exciting new Eco Center built with strawbale, recycled and reclaimed materials, a large solar panel, natural heating/cooling technologies, was celebrated by the presbytery, local churches, and many others connected to Ferncliff. It is believed that Ferncliff’s Eco Center may well be the largest straw bale walled building in the country! A Second Presbyterian Choir member sang “Bless This House;” Ann and Rick Owen (Environmental Stewardship team members) provided music and songs; volunteers, funders, remarks by Presbyterian Women, Arkansas IP&L, Solar Under the Sun, David Gill (Director of Ferncliff) – all contributed to an inspiring event.  A Second Presbyterian Minister gave the closing prayer, reports Alice Andrews chair of the Environmental Stewardship Team.

The ES Team also supports the ministry of Solar Under the Sun and the enthusiastic YAV (young adult volunteers) at Ferncliff (which includes a sustainability component).

Andrews explains another collaboration in which the church’s green team partnered with IP&L to make one of the “leakiest” homes at the Vera Lloyd Home, a well-insulated energy efficient building.  The Vera Lloyd Home in Monticello, AR includes multiple houses where children at risk, from 5-18 years old, live and attend school. (To read more about this project, click here.) 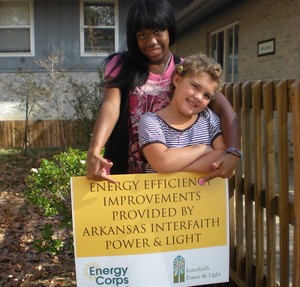 “We replaced all the lights (and provided extra CFLs for future replacement), added insulation, replaced faucets with low flow varieties, added weather-stripping and motion sensors, and insulated the light switches! As we were working, we taught the 8 – 10 children living in the Pettus House, about the energy efficiency changes we were making and why,” explains Andrews. Volunteers from Second Presbyterian Church went to Monticello 4 or 5 times, for 8-10 hour days (including the 4 hour roundtrip) over a period of two and a half months, to complete all this work. 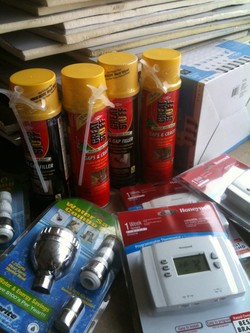 In addition to these large community projects that highlight green building and energy efficient renovations, the church also sings hymns about creation care regularly, provides Eco-Palms on Palm Sunday, and has a permanent Sunday School class that the Environmental Stewardship Team presents. The Sunday School class has utilized courses from the Northwest Earth Institute as well as doing book reviews and bible studies.

A member of the Environmental Stewardship Team also has written three pieces for the congregation on things that individuals can do, to care for the earth. And, the team provides Rebecca Barnes-Davies book, “50 Ways to Help Save the Earth”, to interested church members.

“In addition to the meaningful efforts to care for Earth, education, worship, community building, and facility updates, the friendships grown through this group have been heartwarming” reports Andrews.

As they move forward, possibilities for new efforts may include a butterfly garden or small wildlife area in conjunction with the youth programs, an energy audit, and hosting speakers on the state water plan (an effort that has taken more than a year to draft and is now open for statewide comment).