“Lent” has a new meaning at North Presbyterian Church (Williamsburg, NY) that is close to the word’s ancient etymology. Because of the lengthening days, it’s the time of year when the church starts producing more of the electricity than it uses.

The church has now had two summers of producing more than it uses (June through September). The photovoltaic panels on the flat roofs of North Presbyterian Church went on line May 1, 2012.

2013 was the first full calendar and budget year with solar panels in place. In 2013 the church produced 26,741 kwh of electricity–57% of the electricity used. At the price they are currently paying, that is $4,064 worth of electricity. Subtracting the monthly lease payments of $100 yields a monetary savings of $2864 for the year.

More to the point, says the Earth Care Team, that’s the approximate equivalent of cutting the emissions of 30,000 miles of driving an average car, a significant contribution to our stewardship of the earth and our neighbor’s lungs! 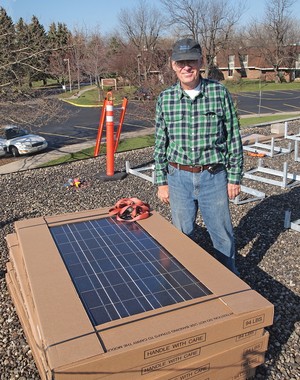 Thanks to Earth Care Team member Pat Townsend for this article, originally found in their church newsletter.

For a story about the church’s decision to go solar, click here.

To read more on the church web site about being NPC being a solar church, click here.